@MallardQuack  It will be interesting to see what your results are during "Prime Time".  Please let me know what you find.

In regards to the modem and version, these are the specs I pulled off this morning.

@RedLir Ran a second test stream last night from around 8 until nearly midnight and had no dropped frames that time. Just did a legit stream on my channel, playing a game and with all the add-ons running and went for four hours with no problems. Seems like my issue was tied to the box on my building.

@MallardQuack That's good news for you!

I ran several tests this weekend without the VPN, they were all experiencing throttled/dropped frames every 30 seconds or so.  As soon as I enable the VPN, solid for hours.

I'm not really sure how to get Rogers to look at this issue or take is seriously.   Did you need to escalate your ticket to a specific resource in the support structure, or was it just coincidence that Rogers techs were at your box that day?

@RedLir Basically when I had the tech come in on Monday, he checked the signals and said everything was fine but I was showing him the issues I was having with OBS. (I made a second Twitch account that I could stream to freely without sending out pointless notifications to my followers) It seems after I persisted enough he said he would create a ticket to have someone check the main lines coming into the building and that they would be there between 48 hours to a week. I thought it was just something he was telling me to be honest because it seemed rather vague, but on Friday there were two techs outside working and whatever they did rectified the issue.

The Rogers engineer that can do something about these issues is @RogersDave. You may have noticed his posts in the forum already and I suspect that he's already seen your posts on this issue.  Responding to user posts is not his primary job but he takes time, when he can, to address specific issues such as this.

A.  Its very possible that there is a limit on the data rate through the modem for RTMP.  Dave would be the engineer on staff who can send this issue to Hitron for further investigation.  ESP/IPSEC is one example where there is a definite limit on the data rate through modem.  The question is, are there other protocols that are limited for any reason, technical or otherwise? That is something that Hitron and Intel would have to determine.

B.  There is no modem that you can buy to use on the network.  Rogers supplies the modems at the present time and will only allow approved modems onto the network.  At the present time, there is no other non-Intel modem available.  Now having said that, are you running a business?  If so, I wonder if the business division might have access to other modems?  I've never had any interactions with that group so I don't know what access to enterprise equipment they have that would be more suitable for businesses and large organizations. I would think they would.

C.  There is always a possibility of congestion issues with the Cable Modem Termination System, which the modem is connected to, and, there is an issue with the CODA-4582 (Intel Puma 7) and large TCP retransmissions.  Are the problems you are experiencing a side-effect of congestion or the TCP issue, or is this simply a matter of a capped data rate for RTMP?  That is something that Dave, Hitron and Intel will have to sort out.

On another note, have a look at the following post by @J04DAN1 which will be of interest as it details his experience of successfully streaming via wifi instead of ethernet to get around the dropped frame problems that he had while connected thru ethernet to the modem:

I'm not sure exactly what information I need to provide, but I've been having an issue with live streaming to twitch. I'm on the Gigabit plan, and while uploading at 4500 bitrate I'll occasionally have my internet speed drop to less than 1mb/s and drop a metric ton of frames.

Examples of this happening: 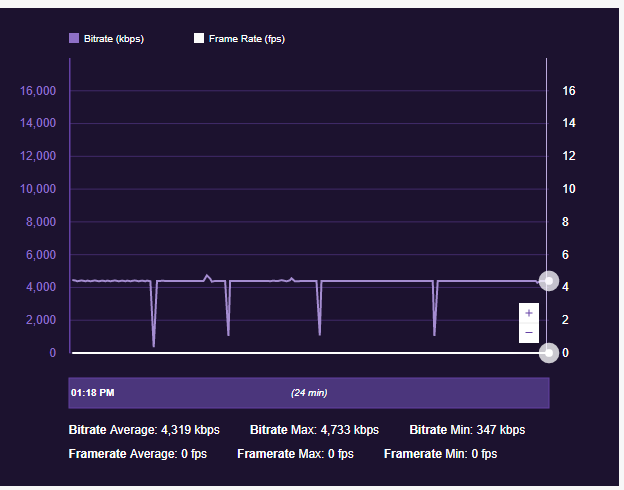 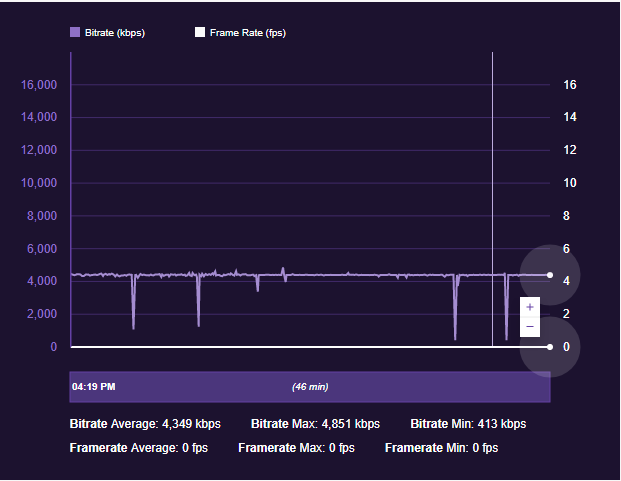 After countless times of being told that everything seemed fine on Rogers end, I had them send a tech who found that there was indeed an issue with my upload, and he told me that he had fixed it.

Later that night, I did a test and the issue persisted. Here is a picture of about a 2 hours stream I did showing it dropping still. 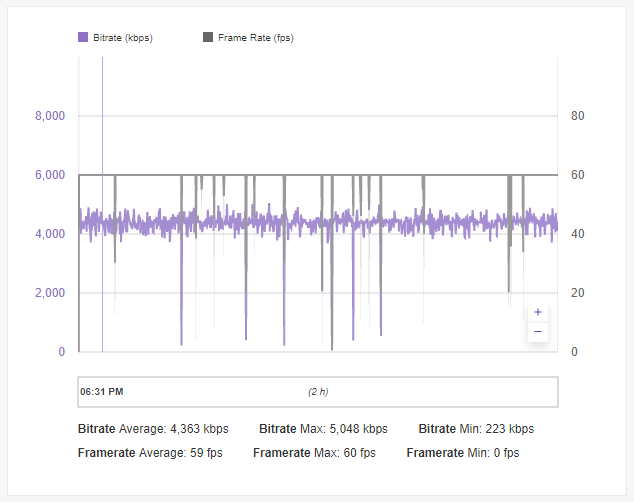 Here is a Twitch Bandwidth test I did. I typically stream to either the Ashburn, VA server, or the New York, NY server as I've found the Chicago server is always either really good, or really bad and I find the Toronto server is very random as well. 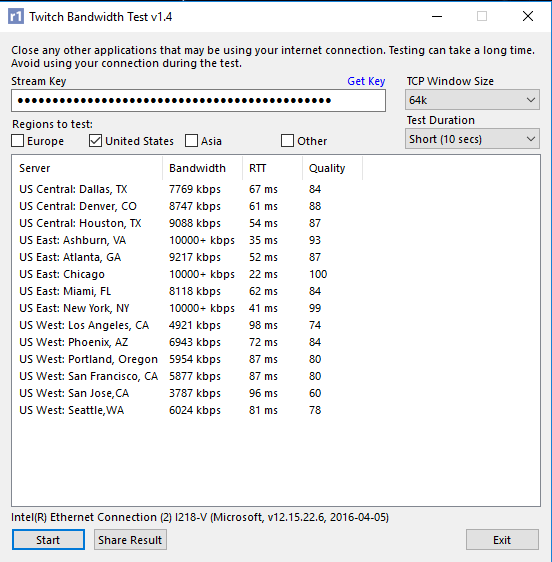 Speedtest.net also shows me about what I'd expect I should be getting, which should be way more than enough for me to be streaming at the 4.5Mb/s that I'm typically at.

If anyone has any insight in what could be wrong, what I can do, or anything like that, please, please help me. I've been struggling with this issue pretty much since the day I upgraded to gigabit, and I've been on the phone with rogers for what feels like 3 weeks now trying to get it fixed just being told that everything seems fine from what they can see.

But if I'm being told everything seems good on their side, and the Tech told me that everything should now be good on my end, but the issue is still happening, obviously something is wrong still and I'm just completely lost at this point.

@Token1 I've not found a permanent solution to my issue either.  Unfortunately I have the same experience with Rogers support as you have, it just seems to go nowhere.

I'm not sure if you saw my workaround, but for me, the only thing that causes things to be stable, is to use a VPN.  You may want to try a free trial ( I'm using Express right now) and connect to the fastest node and leave OBS on auto for ingest selection.  For me it's New York or Jersey most of the time.  I have 0 dropped frames when using the VPN.

Trying it now, running a twitch bandwidth test for almost an hour now with 0 dropped frames. Pretty irritating I'm going to have to now, on top of paying for my internet, also pay for a VPN to be able to use the internet for what I want.

OK so that's at least 2 of us that can prove a VPN works around this issue.  @Token1are you in a single home or a multi unit apartment?

Message 20 of 181
2,918 Views
Report Content
Reply Reply
0 Likes
Where do you want to go?
Topic Stats
Recent Knowledge Base Articles
View All