@RedLir I'm in a single home. Did a 5 hour stream with 0 dropped frames, so can confirm the 1 hour wasn't just a fluke.

Myjamijo
I Plan to Stick Around

Neither of you guys are wrong.

I've tried to stream since 2014 - always thought it was a computer-related issue.  Upgraded my computer, still had issues streaming.  Decided in 2016 to give it a shot and upgrade my Internet plan in order to facilitate being able to stream.  Went from a grandfathered 10/2 to the 100u.

Needless to say, I've thrown my money at literally nothing.  The amount of issues reported by others over the years are always the same.  Internet might be fast, but it is always ever inconsistent.  In fact, it would be wise to say that the internet that Rogers sells to its customers is reliably inconsistent.

Since you guys were doing your research and I thought that I'd be able to pitch in once I got my node connectivity issues over the past 3 months -finally- solved (and even then that's questionable since I know my connection dropped -twice- within the same hour last night), here's further evidence to prove your claims:

3500 mbps test stream to the Chicago server was fine for the first 55 minutes, then: 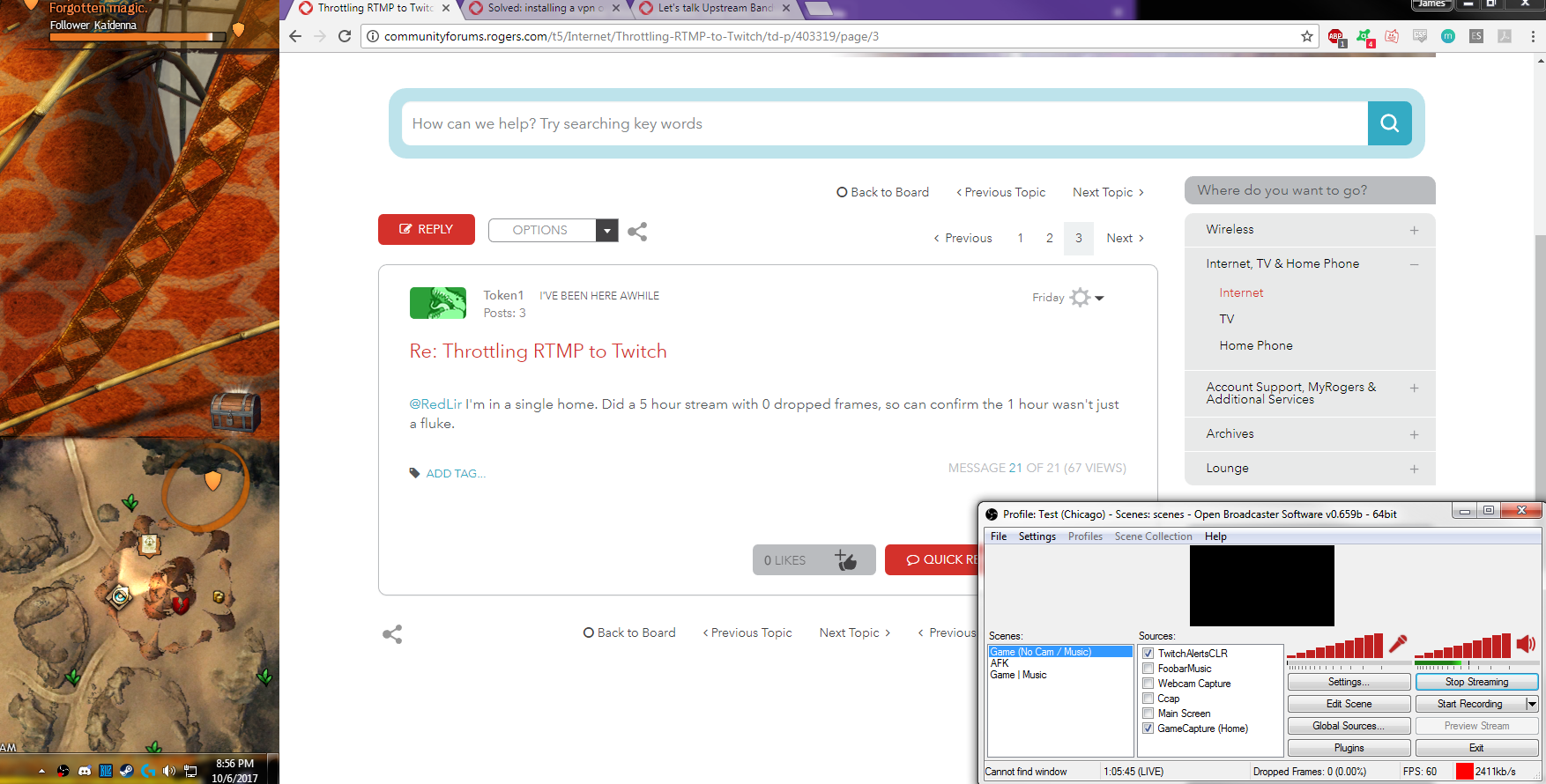 For those unfamiliar - the red box in the lower right-hand corner indicates that anyone that attempts to watch the content you're trying to stream will be met with inconsistent buffering issues from now until the moment you decide to stop it.  But they end up watching someone else with a reliable internet connection instead.

Rogers has single-handedly crushed my dream or desire to stream gaming content because of my inability to do so.  Seriously, what's the point in any of us trying to?

I'm piping in here to confirm that I'm also having the same issue. Every minute or so my stream will drop and have to rebuffer. This isn't exclusive to twitch either, I've tried using mixer because it's built into the xbox and it will go to a green screen, glitch out and never recover after about a minute. I'm going to try running my xbox through a VPN tonight or tomorrow to see if that helps.

I'm on the gigabit plan and have the big white hitron modem (I don't know the model, I'm at work at the moment).

DRayEdge
I Plan to Stick Around

the last time i streamed back in mid october the frame drop issue persisted. as i have posted before, this issue also shows up when streaming to youtube. ill try again with a VPN and post results in the future

Same exact issue. I can confirm that using a VPN "solves" the problem.

I've wasted dozens of hours on the phone, had countless techs come by and nothing has been resolved.

They really aren't taking this seriously and trying to find a solution.

If enough of us complain and insist on being credited the month for the inconvenience and time wasted , maybe that will get them to try a little harder.

Recently got the gigabit connection. It's been about a week and I've been experiencing all the same issues as described in this thread. I did everything in my power to try and rectify this issue. From re-cabling and uninstalling/reinstalling hardware, to have a tech come out and run tests, check lines, etc.

I just finished a conversation with RogersHelps tech support on Twitter and they asked if I'd be interested in trying out new firmware as a tester. At first, I like the idea, but after reading this thread, I'm not convinced that'll fix the issue. I never had this issue with my other provider. The only reason I switched was that of a new bundle deal with Rogers. Not sure what to do now. I'll get the firmware and run tests and report back here.

So far I haven't had the firmware pushed yet, however, I did try the VPN trick and I can confirm it works. I've been wanting to pick up a VPN membership for a while and Pure VPN is having a sale where you can get their VPN service for life at a good price. This is by no means acceptable though, and I would still like to see some effort put into rectifying the issue as it's very obvious that it's on Rogers side.

Received the firmware and nothing has changed. Also, there's a downside to using a VPN and that downside is that VPNs are often unstable. So, at this point, I decided to switch back to Bell. My viewers are CONSTANTLY asking me why my stream is freezing and are asking themselves if it's their own connecting that sucks.

Sorry, Rogers. You've let me down. As I've been saying to many people, if you're an average user you'll never notice an issue. If you're a streamer and take streaming seriously, stay away from Rogers.

I'm on a 500/20 plan.  I've been experiencing the same issue recently and have been following this thread for some time.

Today, however, my stream is suddenly rock solid.  Haven't changed anything on my end.  Did a test stream at 3mbps for about 20 minutes with zero dropped frames.  Cranked it up to 6mbps just to see if it would blow up, dropped 29 frames just after I changed the bitrate, then solid over the next 5 minutes.  I can live with that.

Thought you good folks would be interested to know.

I am having the same issue. I previously used Tek Savvy at 75/10. Spent countless hours on the phone and support tickets. They changed my lines, and eventually said it's Twitch's fault. 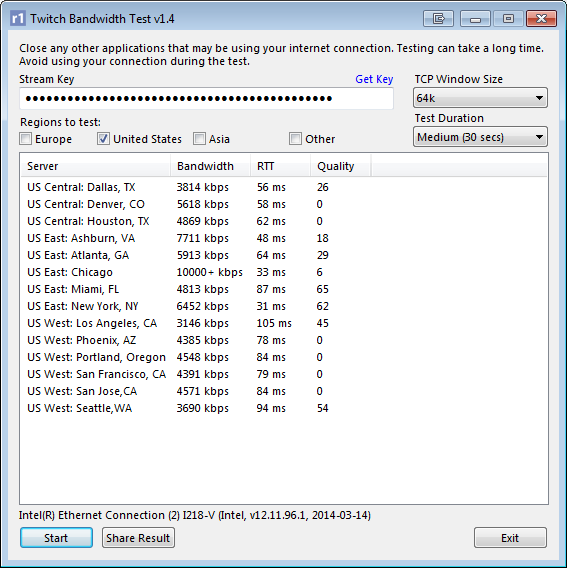 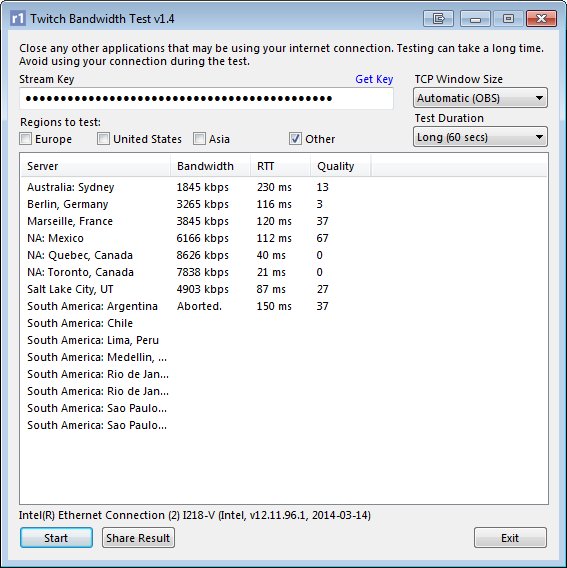 The quality column indicates the level of fluctuation in the stream. If it is below 80, you will have dropped frames. The closest servers to my area have incredibly bad connections.

Message 30 of 181
2,600 Views
Report Content
Reply Reply
0 Likes
Where do you want to go?
Topic Stats
Recent Knowledge Base Articles
View All