So what Rogers is now throttling the speeds again no wonder gaming sucks with Rogers rogers with ea sports games is like water and oil the path Rogers takes to the ea servers are brutal
Message 91 of 189
2,588 Views
Report Content
Reply Reply
0 Likes

Ugh, I selected Toronto as my ingest server. 3500kbps is my bitrate. I was streaming earlier today, and had around <3% frame drops. I tried streaming now during prime time, and I'm getting 30% frame drops. I was assuming the problem is with the CODA modem since I wasn't getting these problems on the old modem, but now I'm just not sure.

Months and months and it's still an issue.

paying for 30mb upload, can't even get constant 5-10mb upload. 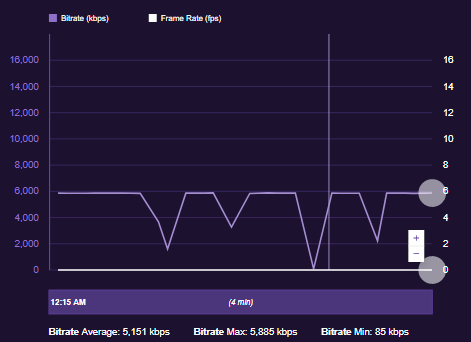 I'm having the same issues as well. Despite internet speeds being fine at Gigabit speeds and more than adequate upload speeds, my streams to Twitch are having extreme troubles, always buffering and losing frames. I can't stream for any period of time, and it's frustrating given that I was able to stream perfectly fine multiple times prior to a few weeks ago.

So I got tired of not being able to stream at a good quality/without frame drops, so I went ahead and just bought a router so I can use the CODA in bridge mode.

When I first set it up, I was actually getting way worse of a connection to Twitch ingest servers than I was on the CODA. Upload speeds were very spotty, and the first couple of test streams resulted in really bad frame drops.

However, I went ahead and followed the steps I think @Datalink posted (disabled IPv6 on the router, opened ports, DHCP reservation, etc) and after a little while, I stopped dropping frames (well, 30 total frames dropped over the course of 2 hours, which is half a seconds worth). I'm not sure which of these fixed the issue, but I disabled IPv6 last and that's when it started working well, so I think that was possibly the issue.

Using the Twitch Bandwidth Test desktop app, I'm getting very good quality numbers to a few servers, as well as maxing out on my upload to them as well, which is pretty good.

I would get constant buffering while watching Twitch streams as well using the CODA in gateway mode, so I'll have to see if using it in bridge with a router has fixed that issue as well.

I'd still like to see the RTMP problems fixed with the CODA, since my router is a cheap, non-gigabit port, and if I upgrade my plan in the future, it would be nice to revert back to that, be able to stream, and also be able to take full advantage of the speeds.

Didn't work for me.

OP here.  Still experiencing the same issue.   The VPN has been the only saving grace for me at least. Unfortunately no other workarounds offered have been effective.

It's disappointing that it's been 6+ months and over 10 pages of people experiencing this,  there has been 0 official Rogers involvement in this thread.

I'm again opening another ticket with rogers.  We're in the 48 hour period.  I expect they will try the usual "found nothing, ticket closed" trick, and then the onsite visit to tell me nothing is wrong.  I informed the customer support analyst that this tactic has been tried time and time again, and asked them what the next step would be to escalate the issue if nothing was found ( again).  They had no response, other than to suggest I upgrade to a Rogers "Business Line" ...  ... ...

If nothing is found again, I will be trying to escalate this first through Rogers support management, then publicly on Twitter.  If that yields no results, the next step will be head office and an official CRTC complaint.  It's unfortunate that such drastic measures need to be taken to have something looked at, but enough is enough at this point.

They are throttling traffic after doing a double digit price increase, it's not accidental, it's a business strategy.  They will only change after enough subscribers switch to competitors.

After switching to TekSavvy, I have immediately seen a dramatic performance increase, and it's cheaper.

And around and around we go...

I called Rogers support again today, because as expected, I did not receive a notification on my ticket.  I was informed that it was closed as there was an 'outage' and it's now resolved.  Oddly enough, the issue is NOT resolved.  Surprised?

The new analyst had me do a speed test, which comes up fine, then proceeded to his L2?  I was informed that because my modem was in bridged mode ( which the previously requested by them to try) I was not supported and there was nothing they could do since the 'speed test' showed as fine.  I escalated.

Next up was a nice lady in a sales/retention team?  It wasn't really clear where they sent me to, but she informed me she was not technical but would however take all my information and escalate a ticket to the office of the president.  While we were there they also switched me to the 1000down/50up package as it was cheaper for the next 12 months, and would allow me to test that in parallel.  I removed my Asus RT-AC86U router, reset the white box to defaults and I ran a speed test.  I was getting 950 down / 24 up.  Less than half the rated upload speed.  I thanked her for her time, and am awaiting a call from the office of the president before the next step ( CRTC)

I called support back, to find out why exactly I would not be getting near the rated upload speed.  I spoke to a nice lady on the east coast.  She ran through the same tests, and proceeded to tell me that there is so much noise in my area, that it was quite alarming.  Even more alarming, is the fact that the 30 day window she had, showed this noise has been affecting my whole area for at least that many days.  Keep in mind, the VPN trick had been working until last week.  But now I'm thinking... why would the first analyst not have seen this same data, or the analyst before him?  This is also a familiar story that I heard many months ago before they sent an onsite visit, only to tell me everything is fine, and front line has no idea of what they're talking about...  Anyhow, she opened yet another ticket for this 'noise' issue.

When I hung up, I installed Wireshark.  I set the filter for tcp.port == 1935 && tcp.analysis.retransmission

I fired up the test stream.  Sure enough, everytime OBS Studio would tank and start dropping frames, the Wireshark window would be flooded with these retransmissions back to back.  There were 1000's of them over the course of just a few minutes.  I turned off the filter and I could see all the DUP ACK that go along with them.     I tested multiple twitch ingests, and the same pattern was there.  It seems like there is significant packet loss/dropping in the Rogers network.

Given the fact that the VPN trick no longer works, it's likely that there are 2 issues affecting my uploads right now.  First, possibly noise in the area ( we'll see).  Second, the usual failures that occrured where only a VPN connection would resolve the issue.

Unfortunately Rogers support seems to think a speedtest is indicitive of a positive end user experience.  In reality, there are so many dropped packets ( intentional or otherwise), there is no way to achieve a real time streaming experience.

I will let you know how things proceed.  There is at least a 48 hour waiting period on both tickets before I proceed with the next step.

Out of curiosity, run a trace to anywhere, it doesn't matter where, www.google.com for example.   Then use the second IP address, which is the CMTS address and run a ping test to that address just to see what the loss numbers look like after a period of time.  I'd run that for an hour for the first run and then for 24 hours for the second run.  When you stop the ping test, take note of the loss numbers.

That test will show the condition of the modem to CMTS path.  You should only lose a handful of packets over the course of 24 hours.  So, it would be interesting to see what the results look like.  Any CSR can look at the noise figures and pull up the historical noise data, so, there shouldn't be a situation where one CSR doesn't look at the data and the next one does.  If any of the CSR's ran a signal check on the modem, and the noise problem is as bad as it sounds, the signal check should have failed automatically and the CSR should have arranged for a tech visit.  Looking out further, if the CSR checked your neighbours and worked back towards the CMTS, if the noise levels were consistently high, then a real Rogers tech and possibly a Maintenance Crew should have been dispatched.

Can you confirm one item for me, you indicated that you were switched to the 1 gig down / 50 Mb/s up.  That plan hasn't been offered for several months now.  Was it the current 1 gig / 30 Mb/s plan instead?  Just curious.

Message 100 of 189
2,307 Views
Report Content
Reply Reply
0 Likes
Where do you want to go?
Topic Stats
Recent Knowledge Base Articles
View All