Mixer told me this;
Thank you for contacting Mixer. What I would recommend doing next is checking to make sure your ISP do not have our FTL ports blocked or capped.
The ports you'll want to have them check are:

Please make sure they are open.

UDP traffic is de-prioritized by ISP's during peak time which isn't an issues when streaming to Twitch, Youtube or Mixer over RTMP.

But does become an issue with our FTL services.

Please let us know what you find.

There is a tech coming to my closest box/node, and possibly my house on sat. I wanted to make rogers aware of this insane routing and inconsistency before he comes. My traffic is routed through waterloo at crazy inconsistency, and insane pings, in some cases 40 before it even leaves the city. Then it is frequently lost and these protected nodes, goes to washington?? new york?? then Monteal?? before back to toronto??. Also had drops in the trace route as well.

I can understand how frustrating it can be when you are experiencing high ping and routing issues which are affecting your performance. I am hoping that the technician will be able to help find a solution.

Keep us posted on how things go after the service call!

2aid
I've Been Around

I'm having similar issues for months with insane routing inconsistencies and latency.

I opened a ticket, spent a fair bit of time and then I was told that someone would contact me. Instead, I received a text message 2 days later saying no issues were found.

I just spoke to another technician and now a visit has been scheduled for tomorrow. I'm not really sure what to expect and how an in-home tech would fix routing issues, but let's see.

kozhitnrun
I Plan to Stick Around

ask for tech super to come out and check how many people are on your node .have him plug into your internet at your house he will run a check and tell you.b4 they fixed my line after 5 months of back n forth they sent super out and there was like over 500 people on my node hench poor down and up stream..problem was fixed now no issue with speeds or ping and no more switching

If anyone has found a solution for this please tell me.

Been at this for 4 months. Finally was recently told that nothing will be done. I thought maybe I'd try for some more eyes. I am a broadcaster, or I was 4 months ago. No I don't have the liberty of switching ISPs. I will first describe issues, then provide proof and information afterwards. {On bell I had 0 of the following issues}. I was finally told about a week ago that they'll push it to engineering but nothing will be done because I'm the only one doing something where it would be noticed so I'm the only one complaining.

The issue at the start was only focus on the fact I couldn't broadcast at all. Talking about 5%-80% dropped frames, regardless of duration, settings, ingest server, or platform. I could sometimes get a broadcast going at <5% dropped frames during graveyard hours, but even then it was rare.

I was assured that at no time of day there was never any congestion anywhere for me all the way to Toronto. Hard to really disprove that besides poor things are working. But things aren't working at all hours. I conceded because I don't want to argue with techs, they are using tools designed to say nothing is wrong.

Here I started digging myself, I was thirsty. Hitron hate, ect ect. But that shouldn't mean things are this bad. I attempt to buy a 300 dollar router, that does really help much and because of rogers firmware my speed gets capped to 300/50. Not really worth the money so I return that. I started using pingplotter and other software to gather information. A vpn did nothing as well, well except destroy my speeds.

This has been going on since the start, but now that I can't get a broadcast going at all after 4 months, the issues leak into every other bit of my use. Twitch buffers constantly until it creates a large enough buffer shield(think youtube videos that pre-download the video in chunks so you keep watching seamlessly.) If I refresh to return to live, it starts buffering again till the shield is created. On services like FTL(Mixer) it will just lag a moment then return to live. Netflix will lower the quality of what I'm watching gradually till it is at the lowest setting unless I use the hidden menu to force highest setting.(I have it set in my preference to use highest quality.)

Video games have been strongly affected to. While attempting Progression in The Weapons Refrain (Ultimate) (FFXIV Endgame) we had to stop raiding for the night because I could not stop lagging. This lag is constant, but at varying verities.

I'll give some technical information now. I am Hardwired on a 2 month old Cat6e cable that is 25 feet long into the CODA-4582U. It is currently on Firmware 2.0.10.34T6. No settings that can be changed inside the modem from logging into it effect these issues positively or negatively. All of my down streams are between 1 and 9 My up is 40-47. I have two ethernet ports on my desktop, they both perform identically. Even with one disabled. My computer specs are as follows;
i7 7820x 4.3
32gb 3000mhz

Here are some Pingplotter screen captures. These are just to google/ingests I was trying to use. 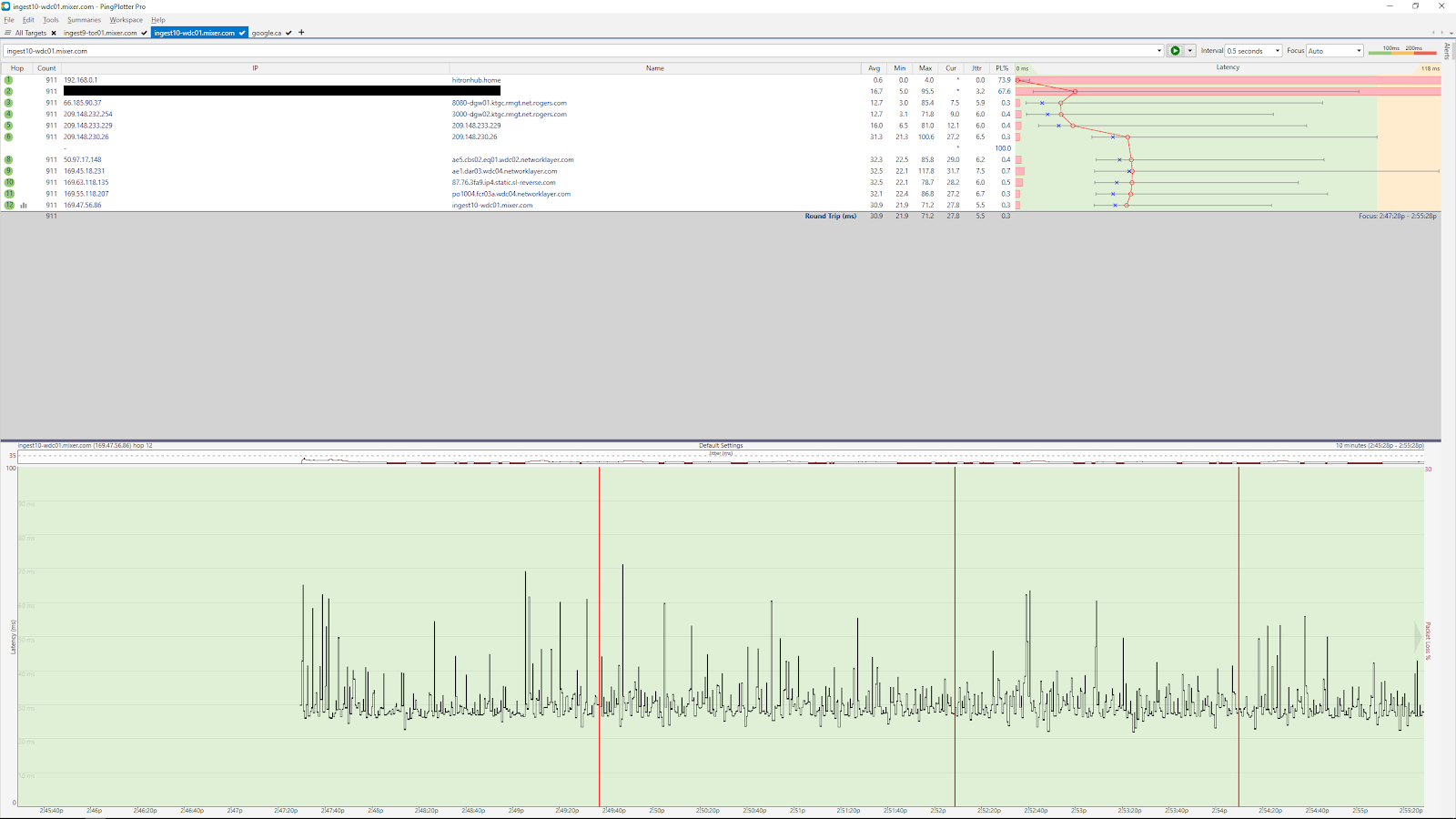 This is an issue in America too. Only they are allowed to go buy their own modem to escape the Firmware level traffic manipulation that causes these issues.

Internet was working well for about a week.

Stream inconsistency is a major issue, even tried to stream at low resolution and was getting consistent frame drops.

There has to be a solution to this ongoing issue, having Solid internet for 1 week and down for two.... 😞

ONYX1222
I Plan to Stick Around

Rogers firware is throttling/limiting all applications through modem

The solution was 35T1 going forward but allowed for more bandwidth that Rogers wants to provide to it's customers....poor practices to save a few bucks in bandwidth which is pricey but not an adequate reason for a quality connection with some oomph ya know more ballsy and consistent and reliable. The red flags happened long ago when Rogers cause to provide a standalone modem. But why, there is an equally higher or equal demand for it from their customer base.

Hitron modems and gateways are fantastic and consistent without the Rogerss limiting firmware from mine and a lot of other customers. I can guarantee their customer base will grow considerably if better bandwidth allotment provided to their customers and better optimization to it's network having providing reliable quality service, no limitations/throttling by network teams provisions that are currently being used in their network and routing beyond the network, IMO is far more important in the real world of internet use on all platforms and devices. Spain France Portugal don't have any problems whatsoever while us gullible Canadians will accept a 50% quality to it's internet services Thanks for listening to my own opinions of course. Hopefully soon Rogers, here is your chance to win a back customers and revenues. Get em Rogers make the change and you won't regret it, you can increase rates to your higher tiers if required to help cover costs for the greater cleaner bandwidth provided and substantiated by great service Thank you, Rogers get em all now 😁

ONYX1222
I Plan to Stick Around

Sorry I meant refused to provide an standalone modem
Message 140 of 181
1,324 Views
Report Content
Reply Reply
0 Likes
Where do you want to go?
Topic Stats
Recent Knowledge Base Articles
View All