I just purchased and installed that kit exactly for my new Rockethub ZTE MF275.

I checked out the MiMo antennas listed in Amazon and the small indoor/outdoor ones seem to be identical although the listing mentions specific Hubs targeted for their use. The antenna listed for the MF275R is this one:

It appears to have a double ended pigtail connector and comes bundled with two low-rent 30' cables which I would probably want to replace with heavier low loss cables.

The cables are something I would definitely consider upgrading (the end at the hub already pulled out once, while trying to screw it on)

I extended mine with an additional 30 ft of cable, and mounted it on a mast that was already on my roof. (about 30ft off the ground)

Before I installed the external MIMO antenna, I was consistently getting 5-8Mbps down, and 1-2Mbps up, with the standard antenna's and sitting in a window facing the tower)

My signal strength did not seem to improve,  but the speeds are well worth the investment in my installation.

Geezer
I Plan to Stick Around

It is good to see someone beating the bushes on the antenna front. I too picked up the identical antenna kit from Amazon, but have not gotten around to installing it yet. I think I'll have to hire someone to do the work since I am not as agile on the roof and on a ladder as I used to be. I'll keep in touch and report on how thing go when I decide to go ahead with the work.

Weather permitting, I'm going to install mine (275 + Amazon kit) this weekend.  Any idea which of the 2 cables on the antenna are H vs V?  Or just keep trying?.....

Weather permitting, I'm going to install mine (275 + Amazon kit) this weekend.  Any idea which of the 2 cables on the antenna are H vs V?  Or just keep trying?.....

When I installed mine, I didn't worry about H or V.  I figured that if the first connection order didn't work, flipping the two cables at the ZTE would fix it.  I either got lucky all the time, or it didn't matter.

I started in the house with connecting the hub to the cables so that when I was on the roof, I could use a smartphone to test signal strength and speed before tightening everything down.  I also used this site (http://www.ertyu.org/steven_nikkel/cancellsites.html) to help me aim the panel antenna in the general direction of the closest Rogers tower.

Luckily I have an almost ideal roof setup, so installation of this antenna, and removing all the old gear was relatively easy.

I did, however, have to pull power, and the battery to reset the ZTE MF275 at one point, as it had a wireless signal, but no internet access.  That seemed to correct the communications issue.

ManicMechanic
I Plan to Stick Around

In looking at that panel antenna from amazon, I think that the internal elements are actually at 45 degrees and 90 degrees to each other.  That is they are in an "X" rather than "+" arrangement.

This would mean the H and V don't matter very much.

So with nice weather today I got the antenna up on the mast.

I tried switching the cables without any significant change - which supports ManicMechanic's hypothesis.

All in all, I'm very satisfied with this setup.

I was using a Huawei B890-66 router because the MF275 with external antenna connections was not available when I first connected with Rogers.

This thread made me aware of the MF275 and gave a good start for my external antenna research. I have ordered a YagiRef2-QLP from BestCellDist.com as shown here:

The WirEng site has several other models such as the Giant, YagiMax and YagiRef-Plus that also should work. There are good specification pages on the WirEng.Com site.

The confusing aspect about this item is it does not mention using two antennas.

Two antennas at +/- 45 degrees are important for LTE because the signal is polarized at those angles. At least that is what I gather from articles, the antenna supplier, a Rogers 2nd-level support person, and this YouTube video:

.... explaining why you need two antennas. It is one of six videos that contributor posted on YouTube.

I will add a second 50' cable. I went with another LMR400 from InfiniteCables.com:

My antenna shipped from Texas January 28, and finally left Toronto February 11. I hope it will arrive this week. I'll install it as soon as possible--weather and snow and ice on the roof permitting. I already have the new cable and drilled the second hole through the house.

It is important to consider low loss cables for longer runs. Using a low gain antenna with a long cable could end up making things worse. The InfiniteCables link above has a chart. Another article said to estimate 1/4 db loss for each connector.

My antenna research started when our service became unusable for long periods in late December. Until then the LTE service with the non-Rogers Huawei B890-66 was reliable--consistently giving 20-30 mbps download speeds. I had to prove my site was not a fault. The non-Rogers router was a concern so I purchased an MF275R. Although promised a 2nd-level callback five times it did not happen until the fifth call. Even then, the 2nd-level support person almost closed the call without contacting me because everything looked fine on his end. I'm glad he called. We discussed the sudden deterioration in service, trouble-shooting on my end, and patterns I saw in the down time. He looked further on his radio and mentioned some receive signal value looked suspicious. It looked like an intermittent equipment problem or outside interference. He must have found something--our service has been reliable since.

The MF275R manages just 9 to 12 mbps instead of the Huawei B890's 20 to 30 Mbps. That is fine because it is reliable. However, the MF275R did get 30-40 mbps for short period one day. I think it managed to switch to a better LTE frequency and get true MIMO service.

The Rogers support person was helpful. He was able to see my place(using Google Earth?) with a good idea of the distance, terrain and vegetation. He recommended an antenna. He said lower frequencies are better for my location's 30 km distance and intervening trees. Lower frequencies have more range and are less affected by trees. Also, the lower frequencies should be less susceptible to signal deterioration from many users. He said it is best if my router connects at 700 MHz because it is only used for LTE and less crowded. Other frequencies share multiple protocols, some of which actually reduce signal strength as they become busier. LTE signal strength does not diminish with more users. At least I think that is what he said!

The YagiRef2-QLP is rated for a 22 db gain or more over the entire frequency range. I'm hopeful it will improve speed and maintain reliability if signal conditions deteriorate again.

I'll report the results here when I get it running.

I installed the YagiRef2-QLP antennas today. They are connected with 50' LMR low-loss cables. I am 30 km from the cell tower. 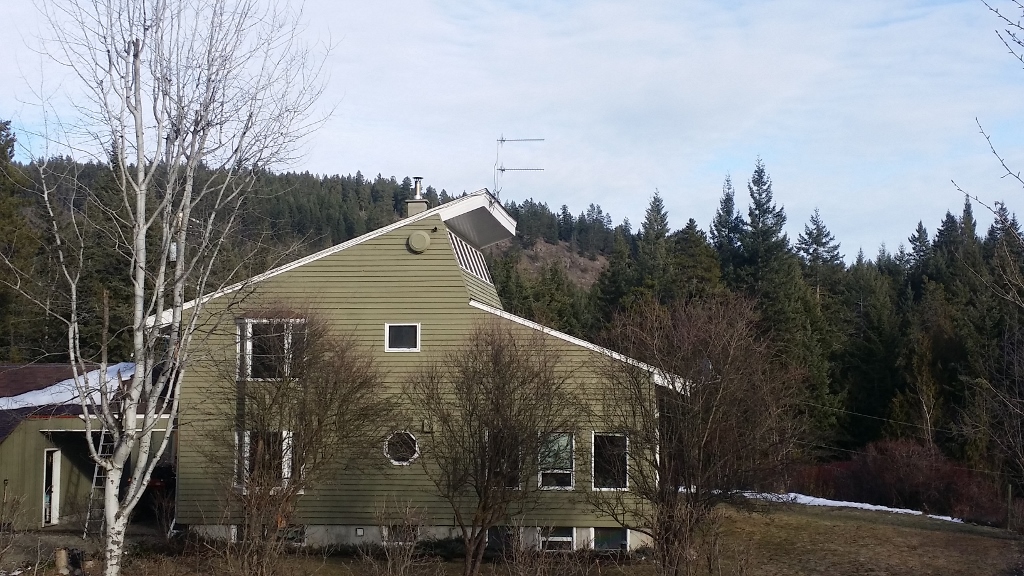 Before installation the MF275R rabbit ears were reading -106 dBm with an average download speed of 10.4 Mbps over six tests.  The old single Wilson 304411 antenna consistently showed signal readings of -100 dBm and download speeds the same as the rabbit ears.

With the YagiRef2-QLP the signal was -92 dBm with an average download of 21.9 Mbps over 18 tests.  The YagiRef2-QLP doubled the download speed and signficantly improved the signal.  The MF275R management pages show an LTE connection with 5 out of 5 bars. I think the download speed is mainly due to the 2nd antenna.  I may have seen the same improvement using cheaper WirEng antennas or other manufacturers' antennas such as the Wilson model 314411.

That said, I'm happy with the more capable YagiRef2-QLP.  It should provide more consistent service.

EDIT: Adding photo showing path to cell tower.  The tower is behind the trees at the bottom of the ridge heading down from the left side.  The cell tower is directly in line with the left edge of the left close fir tree.  The large poplar tree and other deciduous trees may affect the signal a bit when they leaf-out. 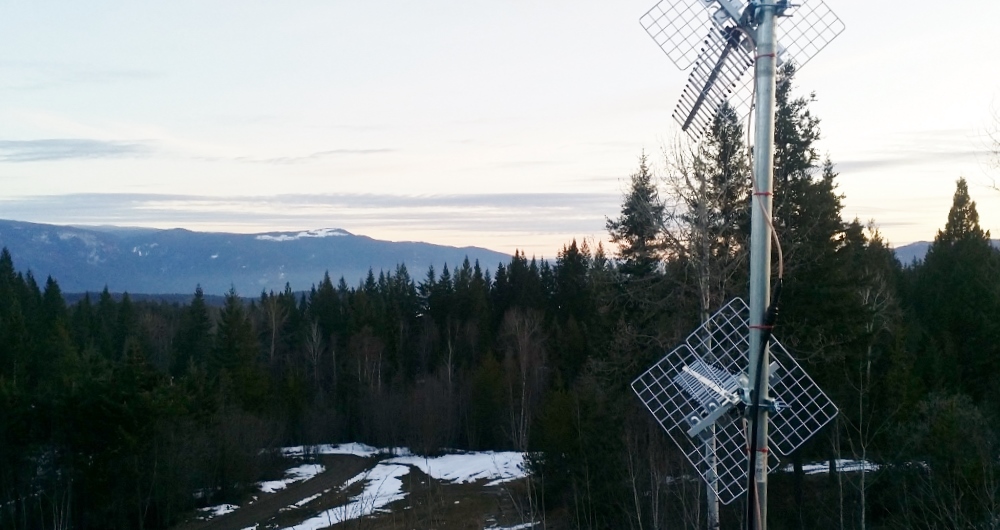 I have a MF275 running now with an outdoor panel MIMO antenna set up.  After installing the antenna I didn't see much of an improvment in the speeds.

I'm going to try to get the antenna higher but also need some additonal cable.  What are people using?  I have the standard 30' of LMR200 currently but since I need to extend, I'm thinking about going to LMR400.

usinJerry, some questions:
- do you have two antenna cables to the router?
- what make and model is your antenna?
- do you have a clear line of site to the tower?
- does the MF275 show as connecting on LTE?
- do you know the frequencies for the tower to which you are connected?
- is your antenna mounted outside or inside?

If you are just 4km from the tower it seems like your signal should be much better than what you are getting.

Google "LMR400 vs LMR200" to see the possible improvement for different cables. This chart:

If you do need additional cable it would be best to install a new LMR-400 for the complete length. However, you may need a more effective antenna. One article I read suggested a 1/4 dB loss for each connector.

Take a look at the links I posted above for more information on antennas. The + & - 45 degree is important for LTE service. Also, the WirEng site I mentioned has good antenna information to help determine which will help for your situation.

Your signal seems weak for being only 4 km from the tower. However, other factors such as heavy traffic or congestion on other parts of the non-cellular network can affect your speed. My download speeds vary between 10 Mbps and 22 Mbps although the signal quality stays the same. Before adding the polarized antenna I was getting 3 to 10 Mbps. Also, my previous non-Rogers Huawei B890-66 router seemed much more capable than the MF275.