stepy2015
I Plan to Stick Around
Options

I was running a few speedtests and noticed I was only getting 400 Mbps down on gigabit hardwired, however other Speedtest servers are faster showing 650-800 Mbps. I have been able to recreate this several times over the last few weeks 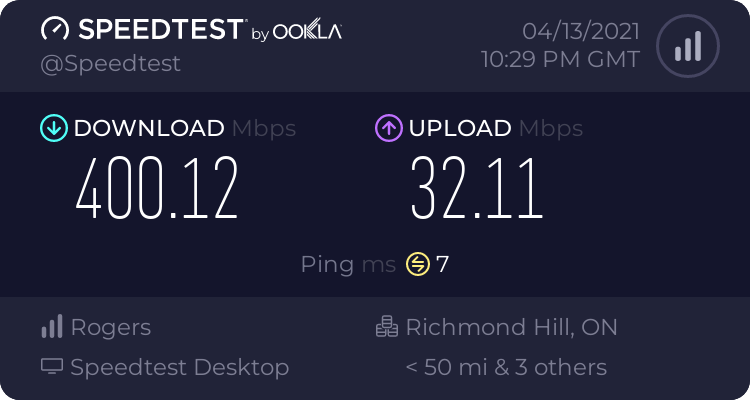 Speedtest on Greensboro, ON Rogers Server: 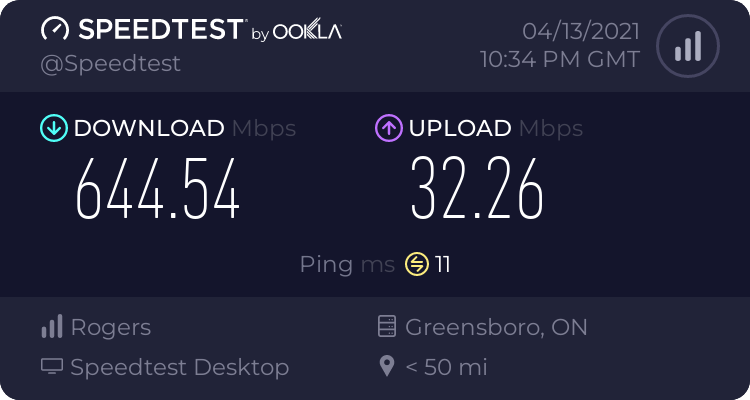 That looks like an issue directly with that particular speedtest server. Either the Richmond Hill server is congested/overused or you're closer to the Greensboro server than the Richmond Hilll one.

User2453
I Plan to Stick Around
Options

I have never gotten the advertised Rogers speeds in Richmond Hill, every time I have spoken with a technician about this it comes down to my neighborhood node being overloaded and Rogers refusing to provision more capacity. At one point I even setup a speed test service using iperf at family members house within the same neighborhood using the same top tier Rogers plan I was and was not able to even use 50% of the upload speed advertised to me, yet when I tested a year later on a cable reseller between the same addresses I was able to cap out the performance as advertised by the reseller. So these explanations from technicians that my neighborhood node was overloaded may be a lie, from my aspect it seems the routing capacity of Rogers is limited at their Newkirk facility, this may be because resellers are occupying strands within the cable owned by Zayo or whomever and have jacked up the rates for Rogers to acquire more capacity, so they just keep squeezing every penny the can out of the links.

Nothing can be done but dedicated time and effort towards getting Rogers to make technician runs to "check", after enough people have wasted enough of their support reps and contractors time maybe they'll realize it's cheaper to just upgrade network capacity in a timely manner.