Just recently upgraded to the Ignite 100 package and along with it the CGN3 modem. Upon installation, I noticed it was broadcasting a 2.4 hidden network. Looked trhough the forum and saw other similar compaints and inaction from Rogers. After inquiring and allowing techs total control of my PC and modem, they concluded that yes there is a hidden network being broadcast, but had no idea why.

In the forums it is claimed that this may be the fault of configuring the modem with the USB security key or if I had the Smart Home security package, but I don't.

Today, after exchanging my modem for a never-used CGN3AMR and hooking it up, sure enough the hidden network returned.

Rogers is being extremely unhelpful. Surely there must be others out there with the same problem or just unaware that their modem is broadcasting an extra network. Apart from the security questions, this network is drawing power and uses the same channel as my 2.4 network.

I don't want to shell out for a separate router. Anyone have success in dealing with Rogers about this?

Doing a network scan in my area I also noticed the same thing.  A few things come to mind:

- Some devices like Roku and others send out their own network info which is the same channels as your wifi router.  Do you have any other devices that might be doing this?

- Did you enable a guest login or something else?

FYI, I'm a techie and well versed in this stuff.

-no rokus or other similar devices

-hidden network is detected on all my wireless devices and modem has been configured from and connected to multiple PCs and laptops in the house.

Had Rogers' techies remote control my PC and modem to troubleshoot and no solution. You can confirm that it is coming from your modem by:

1. Turning off and on your modem and observing the hidden network disappears.

2. Reconfigure your 2.4 to use another channel. Upon reboot, you will see the hidden network has also changed to the new channel.

3. Using a third-party WiFi scanner (http://www.metageek.com/support/downloads/ and select inSSIDer 4 — Personal) you will see that the hidden network is only one digit off the MAC address of your 2.4 network.

The  hidden network is a problem for the Hitron modems, but, you will see no official recognition of this from Rogers.  I have reported this to the engineering staff but have not seen any response to date.  Previous problems of this were due to a misconfigured modem, which you can't change.  The misconfiguration resulted in the Home Monitoring Network running on the modem instead of the Netgear router which is provided for that purpose.  The hidden network seen now is a recent development.  Without more sophisticated equipment to look at that network, its hard to determine if its an actual network that is running or an artifact that the modem is transmitting and which is then misidentified as an actual network.

Edit:  Tech support has access to all of the modem the parameters including the Home Monitoring Network, so, only Tech Support would be able to disable any errant settings.

Datalink, many thanks for your informative post. What kind of equipment would be required to diffientiate between an actual network or an artifact?

Would either or both scenarios affect the quality/strength of the signal? When I scan, it appears that the hidden network is broadcasting at a slightly higher signal than my regular 2.4 signal.

The starting point would probably be a spectrum analyzer to determine if this is an actual network or some artifact that is being generated due to firmware or hardware issues.  Following that, a passive, fairly advanced network monitor application which would easily read all of the transmitted fields if in fact they were valid fields.  That would be some type of commercial application.  I haven't looked into that, but there should be something of that type the market.  This would probably run on a linux device.

Does this present a problem.  I think the short answer is yes (personal opinion).  The modem is transmitting more than one single network, yours.  Whether that really is a network or artifact, the modem is using transmit power that should be going into your network.  The end result is less range to the modem for any wifi device that you are using, and increased frustration with the network, modem, and Rogers.

You might decide that the simple solution is to run the modem in Bridge mode and use your own router, although you may not want to go that route.

Here's a couple of slide that illustrate the problem.  I've sent these and many others to the engineering staff:

MrAureliusR
I Plan to Stick Around

Going to re-post what I found here. I had similar comments on an unrelated thread. 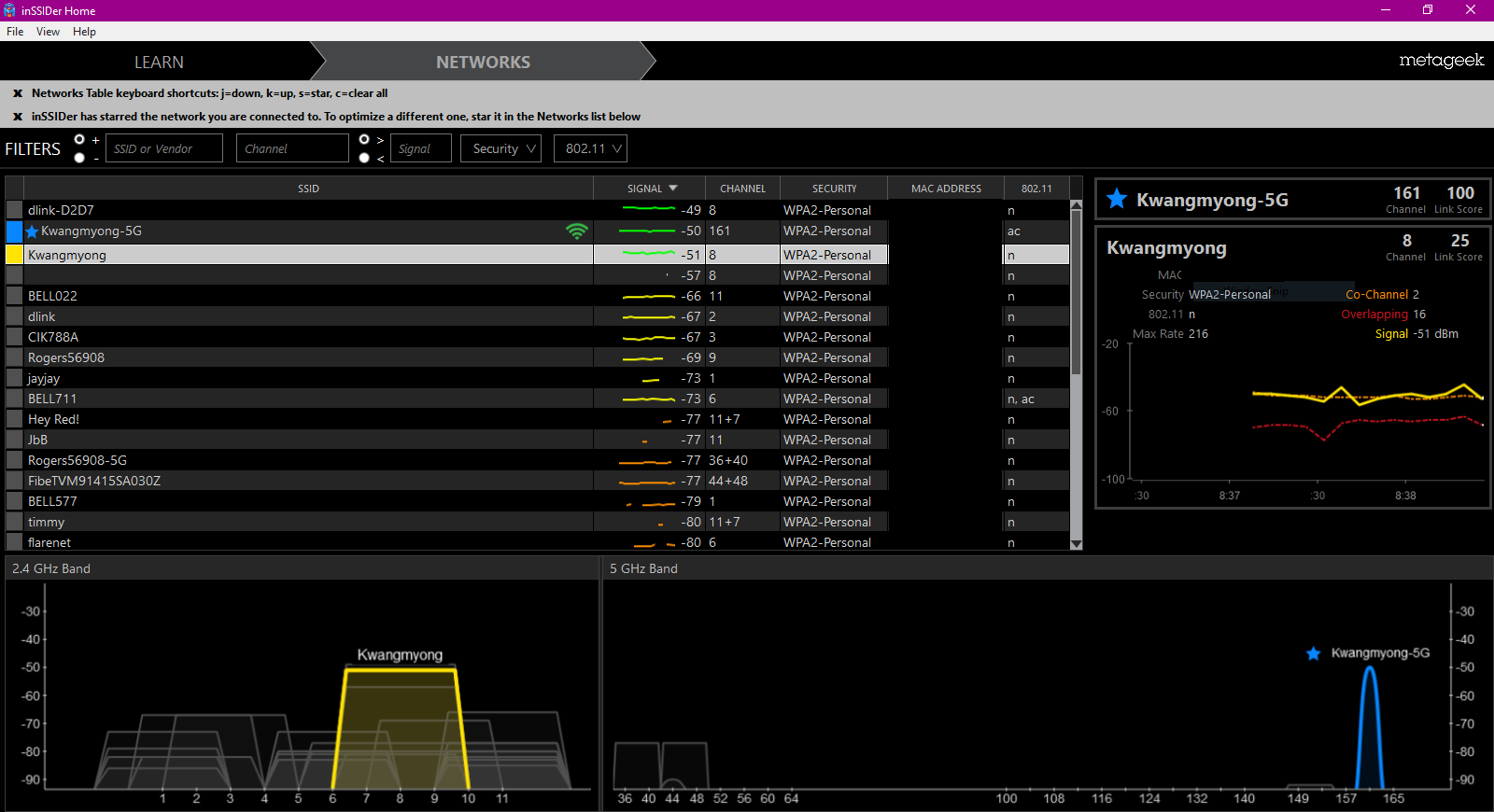 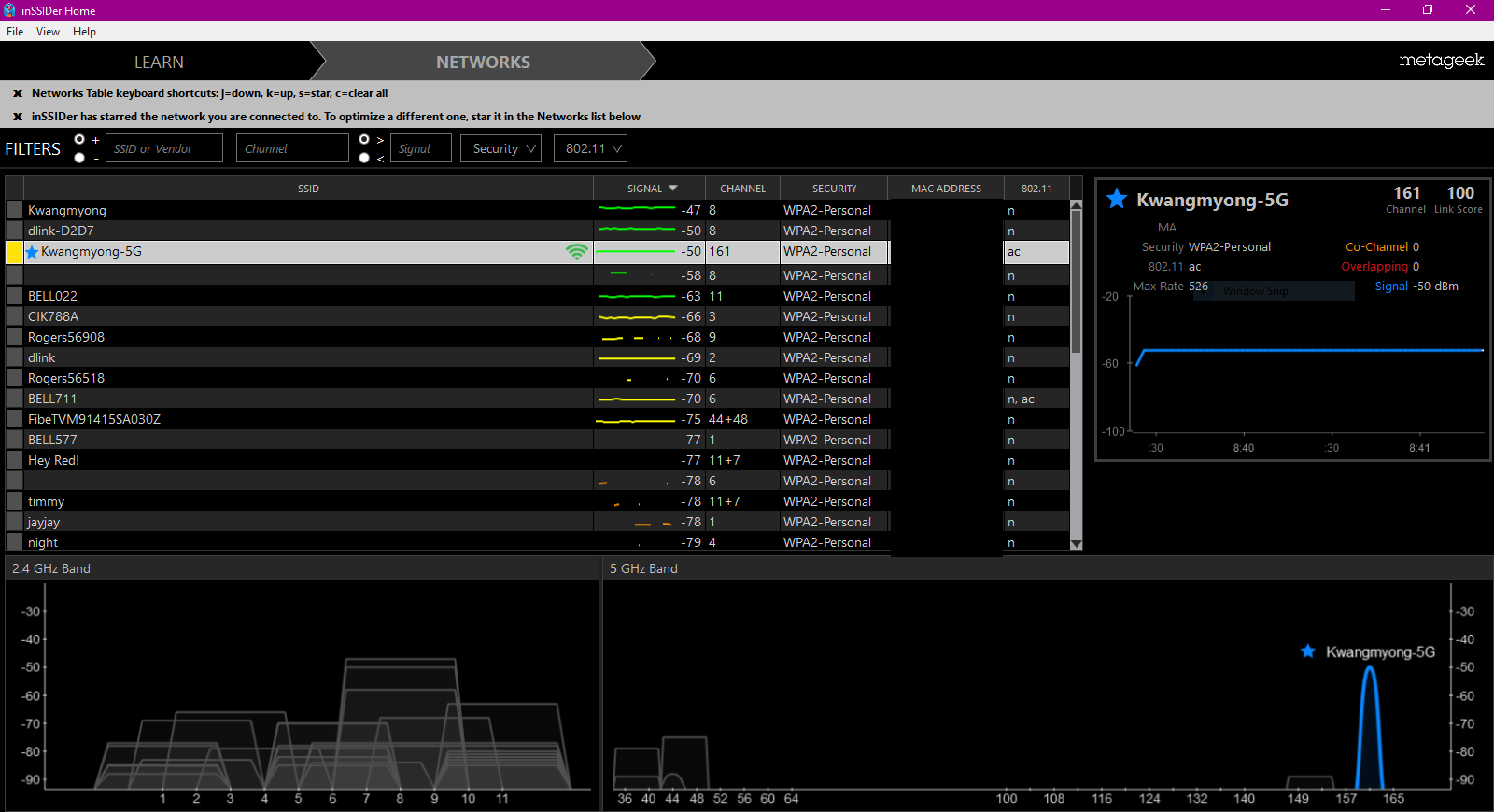 You'll also notice in the next image that the ghost network does not broadcast all the time -- it just sends out occasional "chirps": 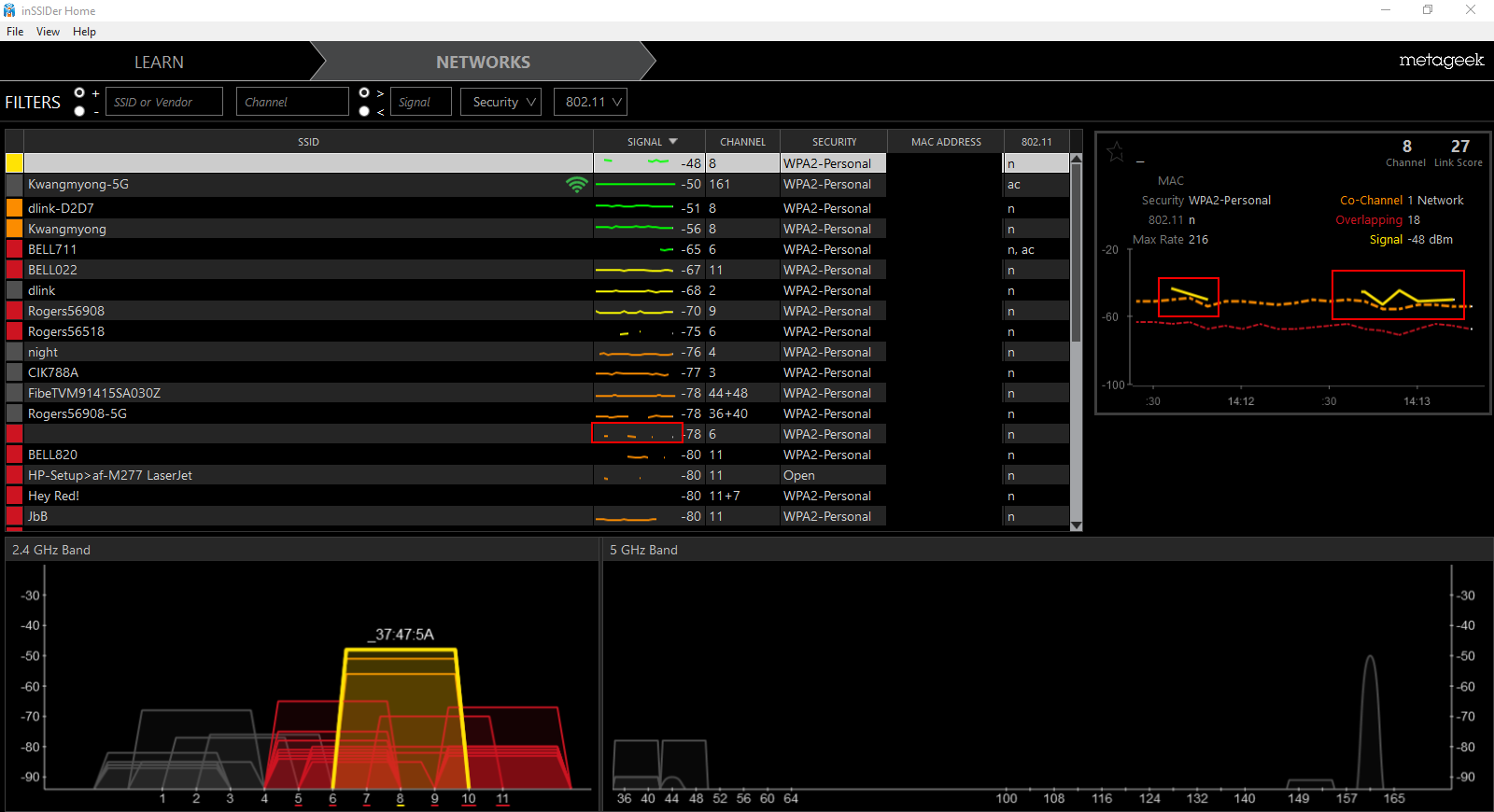 This is consistent with an idle WiFi AP that is in power-saving mode, waiting for a client to connect. Very, very strange indeed. I have to assume it's something to do with the guest network. I am going to experiment with turning the guest network on to see if it has the same MAC address, and whether or not the ghost network disappears.

Your scans are exactly as mine. I have tried the enabling (and re-disabling) of the guest account and no luck. I would appreciate any more insights you come across.

MrAureliusR
I Plan to Stick Around

As an EE student with the proper lab-grade tools sitting in my living room... I could almost certainly figure out which chip it's coming from and why. Unfortunately, I rent my modem from Rogers and am definitely not opening it!

Too bad. I did a teardown of my old Bell DSL modem, and it was interesting to see the choices they made re: chips, and PCB layout. I'm not exactly an RF engineer, but I am an amateur radio operator (ham) so a lot of it makes some sense to me.

I'm really interested to know, if anyone owns their own modem, and the warranty has expired -- if you're willing to open it up and take some hi-res photos and forward them to me... I could probably extract some info.

I too have run into this issue with the broadcast of the hidden SSID, eminating, not only from my own router version 4.5.8.21.

I returned from a vacation to the US last Wednesday (7 days ago), and didn't do any catchup on the Internet side of things, but when we did, I was finding that in particular, our two Blackberry Q10's on most current Rogers approved software, that the connection on 5 G was far stronger than the 2.4G. In the past, it has been generally about the same level and performance, with some dead areas in the house and we would just switch to deal with it.

I began to work with the two laptops in the house with 5G on them, and found their performance to be a bit lacing at times, in particular with browsing on Chrome.  Performance issues on other browsers also showed issues, with Rogers web site ironically being one of the worst to get reliable access to.

Now when I went down to 2.4G, I was finding peformance dropping to around 30 (I have 60 and usally we show speedtest at anywhere from 70 - 100, probably speed boost impacts this at times, but never lower than 60.  We do have a lot of wif traffic in the neighbourhood, but not excessive though - looks like 8 units in our area, including a printer, and a total of 5 hidden netword SSID - of which I can identify at least of them to be Rogers as they all have Rogers in their SSID and the similiar MAC addresses.

One of the routers of whom I know who has it and is a rogers user, it was flipping into two hidden SSID signals and back to one.  The hidden broadcasts in all cases have the same signal strength as both the 2.4 and 5 G.

On the hidden SSID broadcasts, all of them have a lot of breaks in signals - not sure whether that chattering or chirp (new terms to me) - I know what packet loss is, but don't have the tools to look at that.

My packet loss is 0 and signals except the hidden signal is pretty stable and all below -50.

Even when I sat right beside the router, and tried every device, I found this clear degredation on 2.4G on all devices, but not on the 5.0 channel.

I don't have much else to say. I did try to get through to tech support today, but after 1/2 hour (using both chat and phone to see who got in first), I finally gave up - there is only so many times I can listen to the canned messages of how to reboot my modem and other trouble shooting and references to go to chat, when I am already there.  So I decide to post it here just to make sure it is still profile, to acknowledge it is certainly prevelant with every device in my area (the hidden SSID), and that when I left 3 weeks ago, this hidden SSID was not there in my home (don't know about the area), and the degradation of performance on the 2.4 band was not present then either - seems to be related to the recent upgrades (I guess they have gone past beta trial, I never asked for it).  I wonder how this got missed in the trials and testing as it seems to be somewhat prevelent at least on the board here.  Wonder just how prevelent it is in general, but 100% of rogers routers in my area all have it, and in the case of one router, they have their guest under one name, and the main 2.4 under another name, and they have two hidden SSID's present.

I could not replicate this duplication in my router though.

So has anyone else run into this, are their any answers, and does anyone know what is going on here.

At least I now know after searching the forum threads, that the issue with BB is not unique, and the overall issue for other devices and the hidden SSID is not unique to me.

Hope someone finds a solution soon.  I can live with the performance as I do have 5G on all devices but two, one is ethernet, so that one doesn't matter, the other is 2.4 only unfortunately, the furthest location in the house - has been fine up until when we returned.  I can't keep a connection with it at all, if I even can get one.

But we are paying good money for features and speed, and I understand that changing protocols, and upgrades sometimes lead to glitches, but please look closely into what is going on here.

Still wonder if this is the provisioning for Home Network. I don't have one, so it really shouldn't be turned on, and makes no sense why this extra signal is even present, in particular since it seems to be impacting performance.

Message 10 of 24
6,172 Views
Report Content
Reply Reply
0 Likes
Where do you want to go?
Topic Stats
Recent Knowledge Base Articles
View All