Yes, the Live button gets me back, except it leaves the Info banner at the bottom of the screen, which does not disappear.  Pressing Info then displays the full Info description, which then disappears.  Is that what you see with both your 8300 and Nextbox 3.0?  Previously I would use the Exit button to get back to my recording after pressing Guide, or to kill the banner displayed by the Pause or FF buttons.

Info - Live - banner goes away after a few seconds.

Pause - press Pause again and status banner goes away after a few seconds.

Guide - press Guide twice to get back to programme

Info - goes away on its own after a few seconds

Status Banner goes away on its own after a few seconds.

@OLDYELLR:  I don't know. I don't have the RF remote. There may be mention of it earlier in this thread.  I found some reference to it around page 16 when I was looking earlier regarding your issue.

While I've been following this New Rogers RF remote thread, I've not paid that much attention since I didn't have one of these until now, So I went through the posts from the beginning. It appears that several people have noted that the Exit button does not work. Also a few other shortcomings and missed features that were present on the old 5-button 1056 remote. It appears that Rogers didn't work closely enough with Universal Electronics in configuring the new RF/IR remote and missed features, or compromised.  Just a typical byproduct of change for the sake of change.

Here are the old and new remotes: 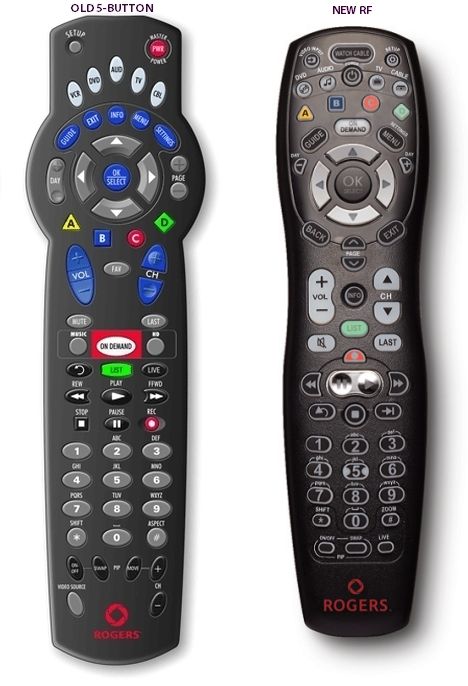 These are the differences:

Clearly the Music and HD buttons are now redundant because they would just take you to what was the first Music and HD channel in the Guide and now those are all over the map. Users also deplored the reduction of PiP buttons and not being able to locate the small picture in the corner they choose, but few people use that feature anymore, relying on recordings. In some ways the new remote is more ergonomic that the old one once you get used to it, but I don't like the extra reach to the A, B and C buttons.

Another problem with my new RF/IR remote is I could not program it to control my Magnavox DVD-RW and my Pioneer AVR like I could with the old one, even though I followed the instructions after entering the model numbers. Not a biggie, because these universal remotes don't do all the functions anyway and I still need the other remotes.

When I was in the Rogers store I saw a (returned?) STB with a 1056 remote sitting on the counter and pointed to the remote as that was what I wanted, but the agent said they only have the new ones and gave me one.  I guess it's unsanitary to pass on used remotes and uneconomical to clean and refurbish them.

So far I'm not really ecstatic about the new remote, but at least when I press the TV button I can control a lot more of the Samsung smart TV functions without reaching for the Samsung remote. Also I like the big Watch Cable button at the top which always turns both the PVR and TV on and off simultaneously. With the 1056 they would get out of phase if not in CBL mode.

On the RF remote I am able to got into MENU (Settings), then scroll to Settings, hit enter, and I am in Settings.


On the RF remote I am able to got into MENU (Settings), then scroll to Settings, hit enter, and I am in Settings.

I have the SA8300HD PVR. Both the MENU (Settings) button and the GUIDE button give me the Guide. No Settings to scroll to. Obviously Rogers no longer has a remote that will adequately control the 8300 PVRs.  Luckily I just found a new 1056 remote on eBay.

OdiaRaj
I Plan to Stick Around

If you want to control 8300HD with new remote, you can convert RF remote in to IR remote. The procedure is ....

After the remote is programmed, there will be some changes..

Message 240 of 336
3,410 Views
Report Content
Reply Reply
0 Likes
Where do you want to go?
Topic Stats
Recent Knowledge Base Articles
View All