I don't disagree with you, just saying over time we end up paying for it. Here is a quote that refers to that and many things in life. "The boiling frog is a fable describing a frog being slowly boiled alive. The premise is that if a frog is put suddenly into boiling water, it will jump out, but if the frog is put in tepid water which is then brought to a boil slowly, it will not perceive the danger and will be cooked to death." Do appreciate your comment and opinion though.
Message 11 of 117
2,442 Views
Report Content
Reply Reply
1 Like

What about those of us who purchased a year subscription before the price hike?

For which services? CraveTV? If it's that then you need to communicate with o CraveTV ( Bell) since Rogers has nothing to do with that. As per my link on page 1 post 1

" If you currently subscribe to CraveTV, we recommend cancelling your CraveTV subscription by November 1st at www.crave.ca. Please note that your current user preferences and watchlists will be lost, and you will be required to enter your Rogers customer log-in information to access the CraveTV app. We will share more details on how you can watch on November 1st"
Message 13 of 117
2,425 Views
Report Content
Reply Reply
0 Likes

For CraveTV which i've already been charged for when the subscription prices were changing they gave existing customers the option to buy subscriptions at older pricing. This also makes me wonder if they knew this deal was coming and were looking to double dip on charging customers.

With the upcoming changes and not having to pay for CraveTV (old HBO content) and current/new HBO content via TMN/HBO package via rogers it makes it a lot more enticing to pick up the additional TV Package.

However, i HIGHLY doubt crave is gonna refund me my money, unless rogers / bell will credit customers for their already paid subscriptions if they pickup an HBO/TMN package with their existing TV package.

Cancelling a subscription would only apply to those who were paying month to month, not anyone who was on the 3/6/12 month subscription plans that crave originally offered before this merger happened.

I would essentially be paying for craveTV AND getting the service again through an HBO/TMN package.
Message 14 of 117
2,417 Views
Report Content
Reply Reply
0 Likes

Bell ultimately is the one in control of the packages but it's worth a shot to contact CraveTV and explain the situation. They should be able to refund you the remaining back to you.

Ultimately this isn't a good situation but it's on their hands and Bell's. Rogers just did the agreement to have CraveTV since they carry HBO and TMN ( which are also owned by Bell).

Its worth a shot asking them though. Doesn't hurt.
Message 15 of 117
2,412 Views
Report Content
Reply Reply
0 Likes

I would concur with what @Meowmix has been saying here.

HBO is an american network, broadcast here under licensing managed by Bell Media until after 2020 and each broadcaster negotiates with them how they want to manage their mix of HBO, TMN (which is owned by Bell Media), and the other options like Encore and the French version.

In this announcement on MobileSyrup https://mobilesyrup.com/2018/10/01/rogers-cravetv-tmn-hbo-packages/

They indicate an update to the original announcement, that every broadcaster is now able to bundle TMN, HBO and Crave together as one package.  If you were to look at VMedia and other broadcasters across the country that offer TMN + HBO, you will find differing mixes available and pricing, so each broadcaster probably chooses what pricing and mix based upon the licencing agreement with Bell Media.

But back to the unfortunate circumstances for those who signed up for the year at the reduced price earlier this year, or have multi month subscriptions, reading the terms for crave on their website, Bell Media has no obligation to refund any prepaid services, irrespective of the period.

So this is not a Rogers issue, it is the unfortunate case of timing and not knowing the future.

As said, it can't hurt to contact Crave and discuss whether there are options, but the reality is that for some they are caught in the situation of making a subscription purchase from Crave in an attempt to keep their prices down, and then a new offer came along with this new bundling that I just learned is being offered through all providers.

Bell currently offers the same package, but it is 25.00 so we may see a small increase at some point depending upon how the licensing agreement was written up.

So give a try and see if you can get a courtesy credit, it can't hurt.  Worst is that you are in the same situation you were in before the announcement came out, and at the end of your current subscription, hopefully the current package price coming in November will apply.  And hopefully it will be like Shomi was and available on our set top boxes, both current cable and the Ignite TV without requiring a separate device for an App to access Crave. If not, I will pick up an Android TV box which will ultimately open up options for me as I consider whether I will ultimately cut the cord.  But as I mentioned in an earlier post, this change provides me with more options to consider as my goal is to get the lowest price possible which may ultimately mean cutting the cord.

This from a person who has become a total cynic about telecom in general.  Reading the articles, there is a lot of changes occurring with over the top services, and on set top devices and things like anyplace TV service provisions.

It is one of those, that pricing and options changed after some had made decisions that made the most sense at the time.

So is this is what's happening at Rogers too?  Dropping the Encore channels and I suspect the TMN networks will be trimmed down from its 4 channels. 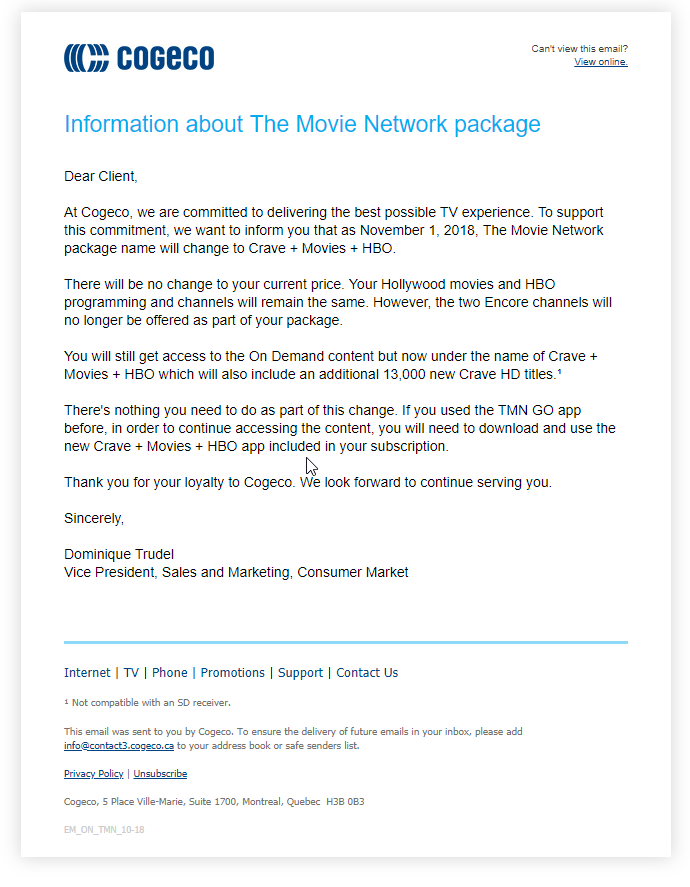 I just wish someone would come out with a 4K channel for current movies!  With no more rental stores options, a The Movie Network style 4K channel would be great!

I contacted TMO / Bell Media and was told that at the moment here is no 4K channel in the listing. However they are taking the suggestions and sending them off to their teams.

The more we contact them about it, the more pressure they have. They should be more smarter to bring it out but I guess it's the cost for them and such they don't want to bare.

Rogers has 4K channels but they are running the same movies every single week. It changes here and there but not enough to warrant.

It would be nice if Rogers own channels and Bell ( TMN / HBO) channels brought more 4K containt. Hopefully CraveTV brings that for us.
Message 19 of 117
2,224 Views
Report Content
Reply Reply
0 Likes

Agree 100%!  I also hound Bell and TMN once a week about a 4K channel, lol   In my area, the last rental store closed down last summer, and my only rental option that I found is Apple 4K store, but no way I'm paying almost $10 a movie!

Message 20 of 117
2,176 Views
Report Content
Reply Reply
0 Likes
Where do you want to go?
Topic Stats
Recent Knowledge Base Articles
View All