when is the Microsoft Lumia 950 availible for preorder at Rogers?

Good to have options, but for me, none of those reasons would justify a $500 premium.

I might use the store for some hard-to-find accessories, or to try out new prodcuts, or to purchase a laptopmtablet... but I just dont see getting cell phone there.

O_M_R
I Plan to Stick Around
In response to Meowmix
Options

@Meowmix I'm with Mediaman. How is all of that put together worth anything like an extra $500? No contract subsidy, and I'll have to seriously consider Android.

I agree as Microsoft won't give u discounts on the device price same as Rogers unless they have a promo but again it's your own choice where to go and get the device. I wanted a Windows phone but Android and Apple took me lll
0 Likes
Share
Reply

Corman
I Plan to Stick Around
In response to Meowmix
Options

The Rogers Facebook page states they have no plans to carry the Lumia 950 or Lumia 950 XL. Extremely disappointing. I'll buy a device from Rogers with a high resale value, sign a 2 year contract, and then sell the device on Kijiji. Then I'll buy the Lumia 950 XL from the Microsoft store.

O_M_R
I Plan to Stick Around
In response to Corman
Options

@Corman VERY disappointing, but I feared they wouldn't be doing any more Windows devices.

Meowmix
I'm a Trusted Advisor
In response to Corman
Options

Yeah i saw that too. It says " We don't have any plans to carry it at THIS TIME". Which means it can change any time if WE all show we want it. Unless Telus or Bell has the exclusive rights.
0 Likes
Share
Reply

Corman
I Plan to Stick Around
In response to Meowmix
Options

Unfortunately I've heard rumours there has been absolutely no discussions with carriers in Canada since August and it may have to do with Microsoft's restructuring. It's possible they may eventually carry the device(s) but it's not looking good for 2015. I hope they're wrong but judging by the lack of devices displayed on Bell, Telus, and Rogers websites it appears it could be true.
0 Likes
Share
Reply

How accruate is the facebook posting? Is that just an opinion of one person? How can Miscosoft Canada hope yo sell phones if there are no Canadian carriers??

Well ...if Rogers in fact never carries the Lumia that is dissapointing...but understandable given the current Windows 10 market share is pretty low. Then again I think its a higher share than Blackberry, which Rogers does carry, so who knows.

If Rogers indeed never carries it, sure, then a unlocked Microsoft store purchase may make sense for us Windows fans,  if one is willing to shell out that kind of money. But then I would worry if Rogers would even allow Windows phone on its network - ie what if they abandon Windows altoghter!   I would not buy a Windows phone anywhwre until I was assured it would work on the Rogers network for the duration of my bring-your-own-phone contract.

If they do truly abandon Windows, that leaves only Android, Apple...or just swithicng over to Bell.

@Mediaman Just checked on the Rogers Wireless store to see what they're offering right now. Not a single Windows device (yet they do have one Symbian. SYMBIAN, can you believe it?!).

Looks like that's it for Windows Mobile in Canada. If people who've never tried it have to jump through so many hoops, and it is only offered through the Microsoft Store (of which there are only a handful), then no one in Canada will buy it, and the puny ecosystem it has now will continue to decline.

Mediaman
I'm a Reliable Contributor
In response to O_M_R
Options

Meowmix
I'm a Trusted Advisor
In response to O_M_R
Options 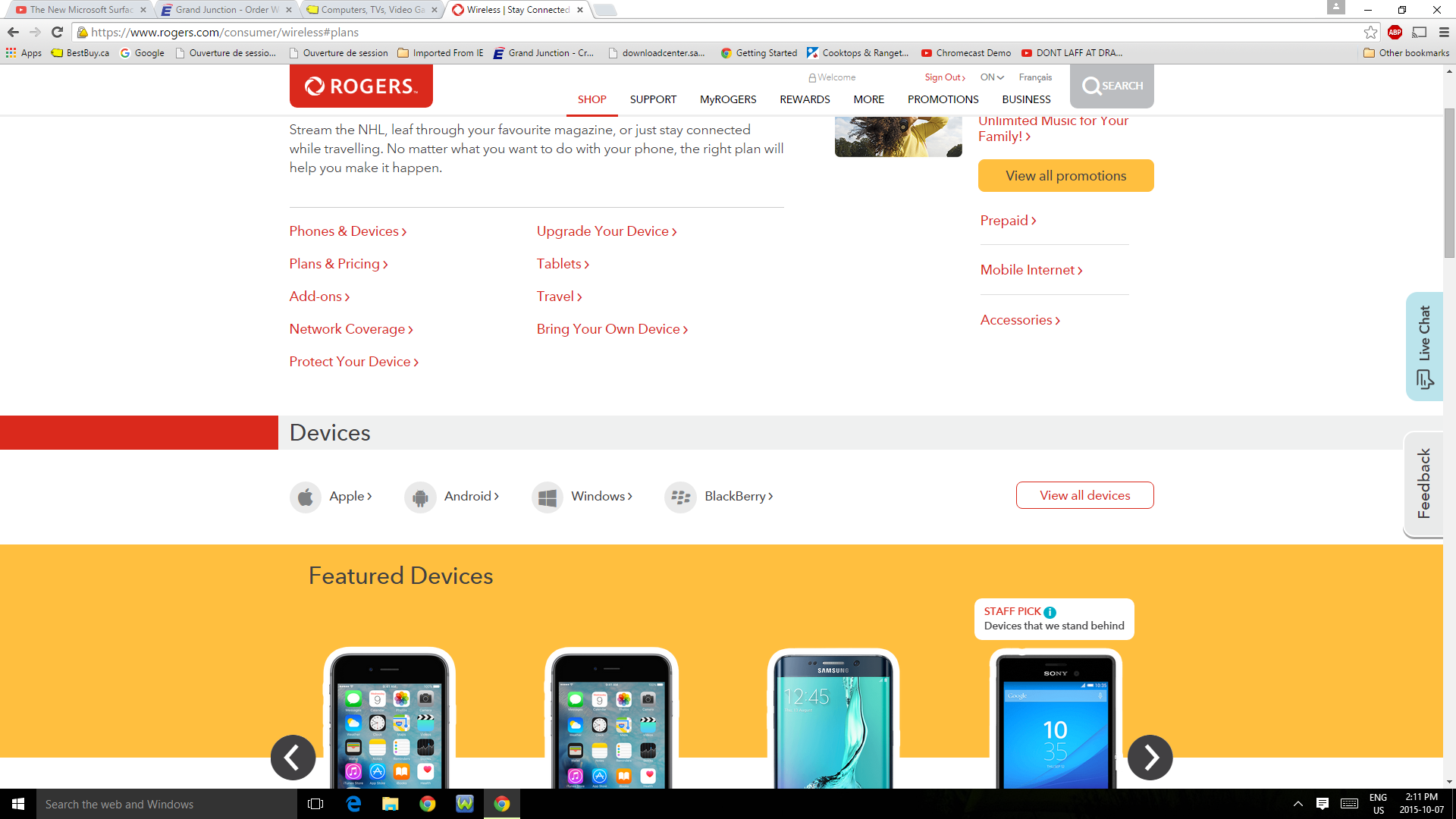 O_M_R
I Plan to Stick Around
In response to geokots
Options

Corman
I Plan to Stick Around
In response to geokots
Options

If another carrier has it, I'll be switching for sure.
0 Likes
Share
Reply

Mediaman
I'm a Reliable Contributor
In response to Corman
Options

Mediaman
I'm a Reliable Contributor
In response to theFiasco
Options

It would appear that it's not just Microsoft Canada dropping the ball,; its Microsoft US as well.

Check out this article:

http://www.informationweek.com/mobile/mobile-devices/microsofts-new-lumia-phones-feel-like-failure/a...
Interesting comment .... "AT&T is the only US carrier to voice any support for these phones, and so far it is only committing to the smaller Lumia 950. Not a single carrier has said it will sell the larger XL. Without any shelf space in Sprint, T-Mobile, and Verizon shops, the 950 and 950 XL hardly have a chance at all. The vast majority of smartphone shoppers in the US buy their phones
Would really be ashame if it truly is doomed to fail.
It will be a fascincating Q4 as we watch events unfold.
0 Likes
Share
Reply

Mediaman
I'm a Reliable Contributor
In response to Mediaman
Options

Hmm, the theme re lack of carrier support seems very real. Every article I now read makes that point.
Here is another :
http://www.pcmag.com/article2/0,2817,2492659,00.asp
Hands On With the Lumia 950, 950 XL: Beautiful But Doomed ; Microsoft's new phones are beautiful, but are unlikely to succeed without carrier support.
Worth a read, as well as the comments. The first comment in that article summarizes it well. " Microsoft can't be this dumb and if they are then their mobile division deserves to crash and burn. "
1 Like
Share
Reply