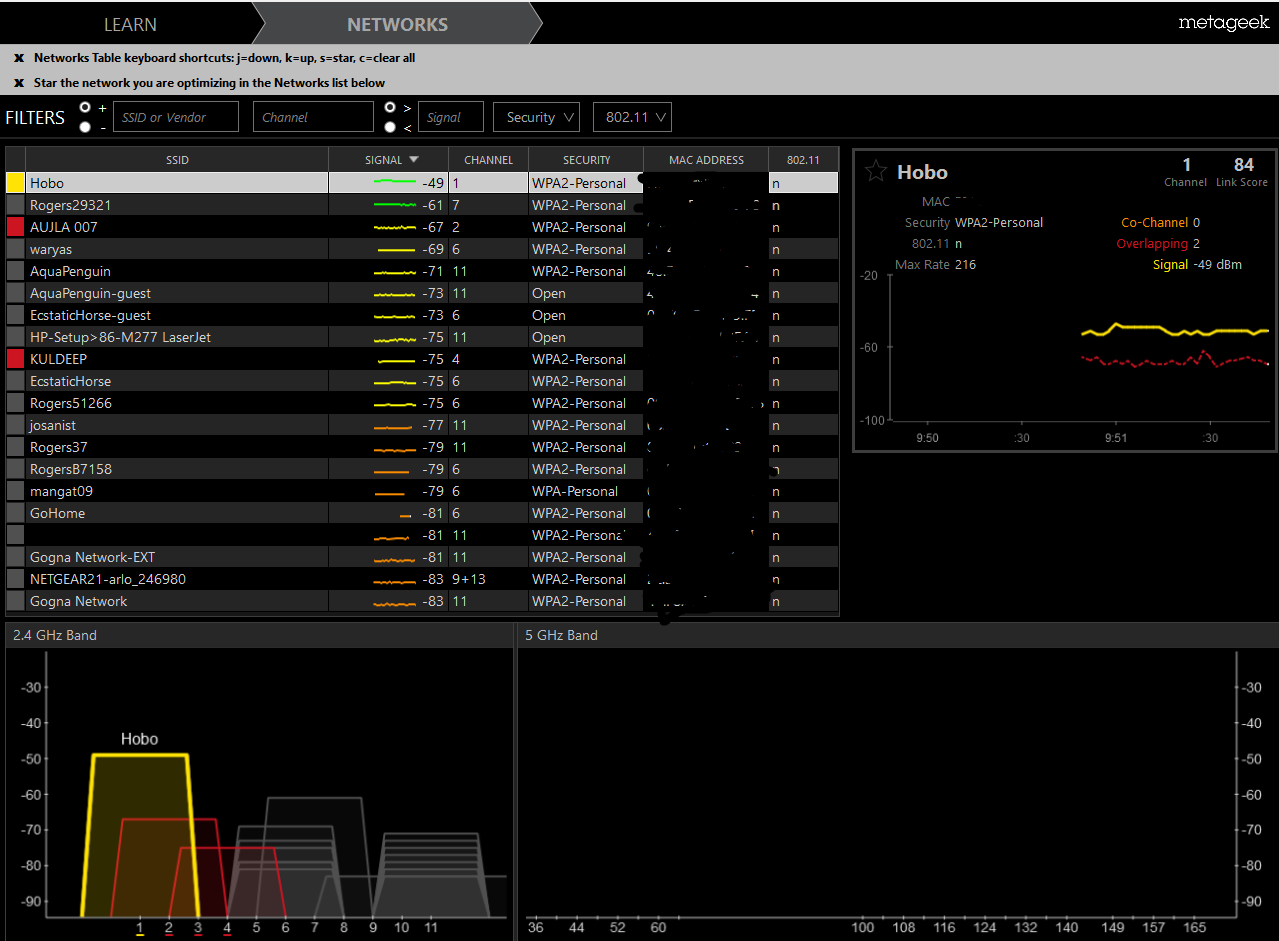 Ok, what is it that the doctor says? I have your good news and your bad news.  Which would you prefer?

Your cable's downstream signal levels are good, as are the signal to noise ratios.  Can you post the upstream table as well?  You should have three upstream channels running.

Wifi is a problem. You're in a pretty tough spot with a lot of competition for 2.4 Ghz channels, and from looking at the signal levels of those other modems, I don't think that you're going to get the improvement that you need on the 2.4 Ghz side of the house.  My immediate reaction would be to move up to the 5 Ghz band.  Do you happen to have anything that is dual band capable that you can load inSSIDer on and see whats running in that band?  The 5 Ghz space on the application is empty as that device, laptop or pc doesn't support 5 Ghz.  It would be good to see what you would be competing with in that band if you decided to make that jump.

Your network signal level is at -49 dBmW.  The nearest competition is at -67 dBmW.  Thats only an 18 dBmW separation, where you really need in the neighborhood of 40 to 45 to run a wifi network without much difficulty at all.  Looking at the competition, it won't get much better, no matter what channel you try.

Are you running a laptop or a wifi pc?  If its a laptop, can you post the exact laptop model number and also drill down the following path:  Start ..... Control Panel ..... Device Manager ..... Network Adapters.  Copy the entire name field for the wifi adapter and post it as well.  With that we can look up the specs and see what the wifi card can do.  Its possible that the wifi card could be replace with a dual band card, allowing you to run on a 5 Ghz network.  @VivienM is the expert on this who can tell you if the wifi card can be replaced.  That depends on the manufacturer as some whitelist cards which can be used, or in other words, lock out other wifi cards from being used on the laptop.  The other consideration is a USB wifi dongle such as the Asus USB-AC56.  That dongle is 802.11ac capable which would really improve your data throughput compared to what you're probably seeing now.

You could also use a router that has Implicit Beamforming capability.  Beamforming is part of the 5 Ghz 802.11ac specification, but, Asus routers have an implicit capability in the 2.4 Gh band which allows the router to determine the direction to the device and time the individual antenna transmissions to aim a coherent wavefront in the direction of the device.  That results in an increased signal level at both ends and a higher data rate.  Is it enough to overcome the competing routers and modems running nearby, good question.  It would be an interesting test.  If you were on a single floor condo or house, you could combine a router with higher gain antenna.  The higher gain antenna flattens the vertical energy distribution of the router and extends in the horizontal direction, again, resulting in higher signal levels and data rates.

So, there are some options.  Its really a question of what you happen to be running and what can be done to kick those devices up into the 5 Ghz band.

5G is Empty only 2 networks the only thing im concerned about is my ps4 thats the one thats suffering the most it lags alot and could that be the reason why because my internet started to act out like about 1 week ago and that doesnt support 5g sadly im wondering if a ethernet adapter would make a difference because i have one that i use sometimes for my pc
Message 53 of 97
2,931 Views
Report Content
Reply Reply
0 Likes

Your upstream signal levels are good.  If you have an ethernet adapter, that absolutely should make a difference.  I think anyone who has a choice in gaming via ethernet or wifi should run via ethernet just to get away from any potential wifi interference.  For wifi, all it takes is for one of your close neighbors to bring home a new modem or router and you are potentially hooped when it comes to running anything via wifi.

So there is no way i can bring the dBmW any lower then -49 because the only problem i have with 5g is the range
Message 55 of 97
2,918 Views
Report Content
Reply Reply
0 Likes

Actually you want it to go higher.  The scale starts at zero at the top and drops as you go down the chart.  So, the only thing you really control is your network.  And the only way to push the signal level up is to run a better router or move the modem.  Even then, I wouldn't guarantee that will be enough to make a difference, that is, enough that the receive level for your network is high enough to run the network without any difficulties.  Are you in an apartment, condo, house, etc, etc?

If you can relocate the modem to another place that is closer to the console you might be able to run the console without any problems, just depends on the distance.

We're using a Ethernet cable from the modem to the TV. Streaming still lags. TV is in the basement, modem is on the main floor. Is there something we can do to improve? Thanks.
Message 57 of 97
2,896 Views
Report Content
Reply Reply
0 Likes

There are a few things that come to mind, along with a few questions:

2. What modem do you have as seen by the product sticker on the back of the modem?
CGN2, CGN3, CGN3ACR, CGN3ACSMR or other

3. Are you streaming in high def?

4. Is your ethernet connection via house ethernet or store bought Cat 5e or 6 cable?

5. Can you log into your modem, navigate to the STATUS .... DOCSIS WAN page, copy the downstream and upstream tables and paste them into the thread. Those are the RG-6 signal levels and signal to noise ratios which will be worth looking at. The copy and paste process will paste in the text components of the tables, so you don't have to insert a screen capture into your next post.

With that info we can start to figure out what the problem might be.

Does anyone ever had this issue .... I have a roger 150 plan and I'm only getting 23 mb  throughout the house had the tech swap out three more modems even the new white hi torn one same thing the tech thinks that there might be interference in that room,the modem is on the main floor in the middle of the main floor and I can stand in the room the modem is and all I get is the same 23mb ??? I suggested trying a 25 foot cat 6 Ethernet cable and put the modem in the living room  kitchen and even upstairs ,I'm 25 feet away from the room the modem was and still 23 my no difference. I bought asus ac1900 dual band router bridged my Rogers ignite router turned off the ignite antennas and nothing changed I even took the 25 foot Ethernet plugged it into the ignite modem side and plugged it into the asus router and tried it in the kitchen living room an upstairs and it didn't make a difference I even swapped the asus router for a new one and exactly the same thing my house is 1800 sq ft really don't know what else to do I even unplugged everything near by any one else having this kind of issue.??

Message 60 of 97
2,416 Views
Report Content
Reply Reply
0 Likes
Where do you want to go?
Topic Stats
Recent Knowledge Base Articles
View All