nuts
I've Been Around

My connection is suffering from packet loss under 5%, when the tech visited and ran his test he said everything looked fine and packet loss under 5% is considered within normal bounds. The packet loss is making connection sensitive tasks like gaming un-playable. What can I do to get this fixed? I have a cisco DPC3825 which has been replaced twice already, once by me and once by the tech and the issue hasn't resolved itself. 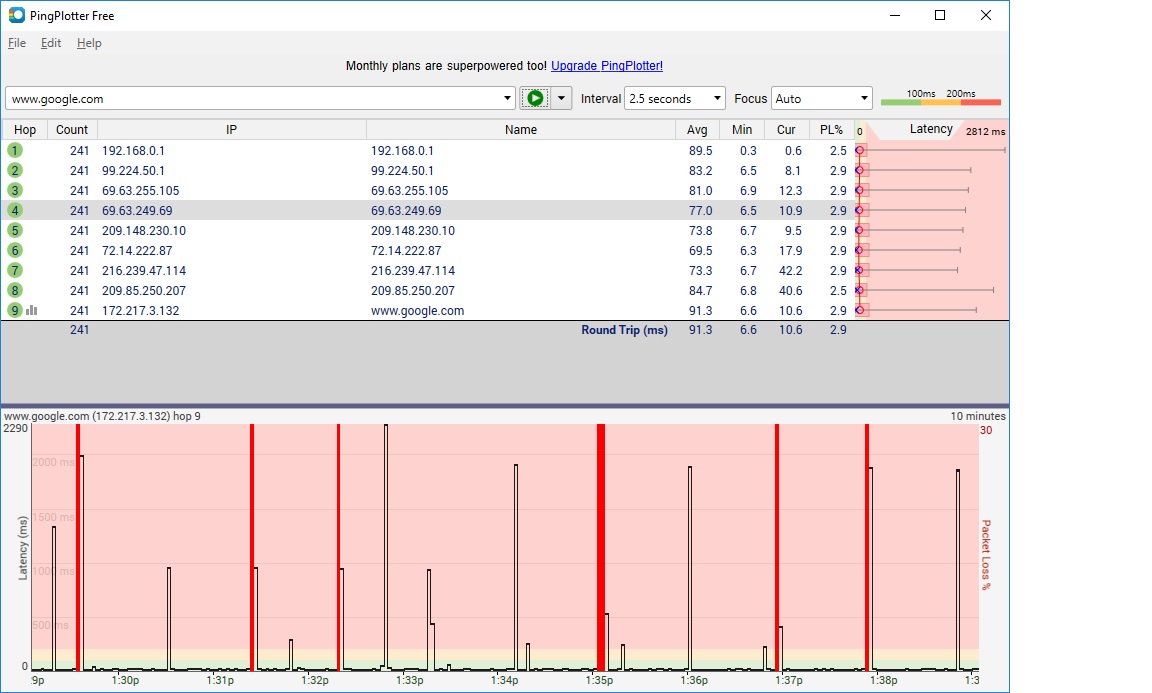 larryjhawkins
I Plan to Stick Around

JohnyR
I Plan to Stick Around

Here it goes again.. Had the same issue with my 3rd party ISP around the same time last year. Even after switching to Rogers GIG, it's back. Pretty sure there is something terribly wrong with my node when it gets cold outside. Smokeping to node over last 7 days:

Latency to Node (always get crazy latency around the evenings.....):

What's my best course of action here? I've gone through 10 techs last year with my old ISP (using Rogers lines), and they would never EVER recommend maintenance to take a look at the node. I really don't want to go through another 50+ calls with CS.

maxium
I've Been Around

I have the dcp3825  router/modem and on a wired connection to it i am experiencing high amounts of packet loss on the second hop in my traceroute. this is causing large spikes in otherwise great ping while playing games. I am wondering if there is anything i am able to do to resolve this issue.   ive inserted a ping plotter below of the path to the gateway of the game i play on. This second hop also has the same issues when runnign ping plotter to places like google.com aswell.

JohnyR
I Plan to Stick Around

I've been experiencing really horrible pings during the peak times. It is almost impossible to play anything that requires a stable and consistent latency. I know for a fact that this is node congestion because my other two friends, who happen to live in the same neighborhood, are experiencing the same issue at the same time that I am.

Should I just wait for the 3.1 rollout, or should I be submitting more tickest regarding this issue? Any advice would be appreciated 🙂

Last weeks congestion: You can see that there is quite a decent amount of PL (in pink) and the ping spikes as high as 200ms.

Yesterdays congestion: Look at the extreme variance in latency in the first graph. From 20ms all the way to 300ms. Congestion dies down around 12am

Just using a simple ping test and I am seeing a 48% packet loss on the 2nd hop out.

Seems like a serious issue to me , if so how can we get this escalated and fixed?

1st hop, desktop to my UTM 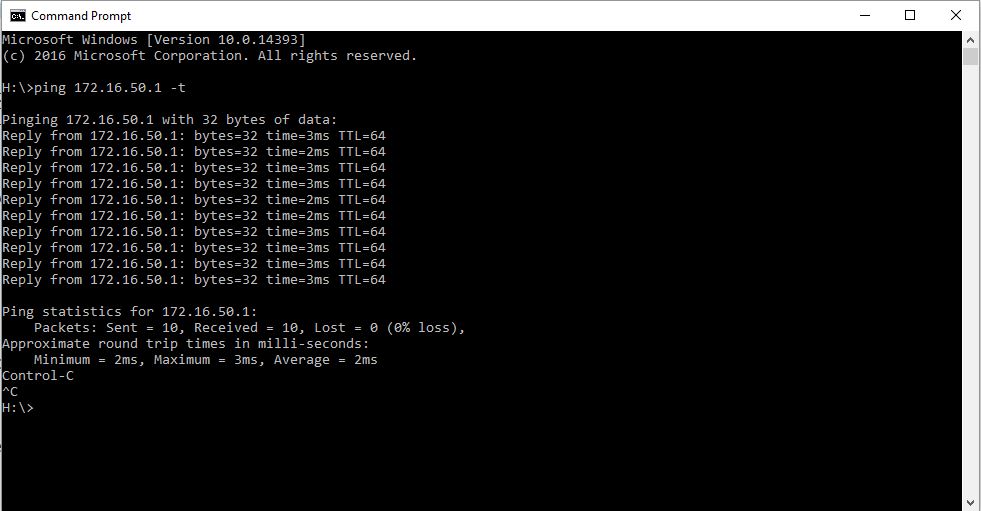 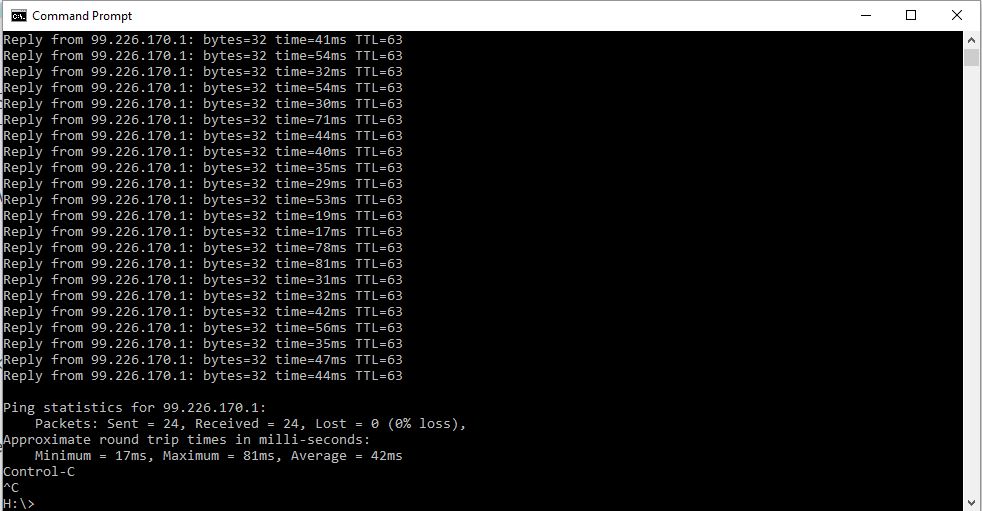 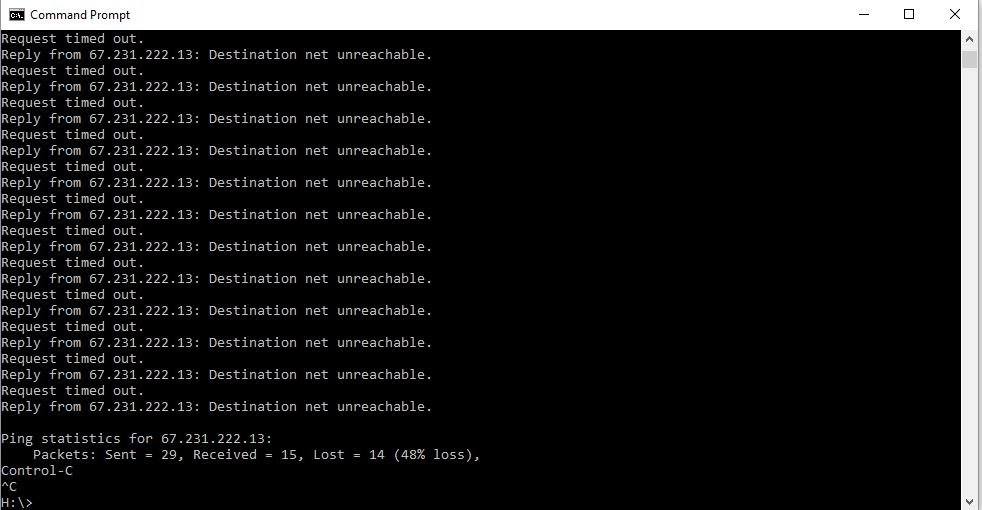 Myself and a few neighbors are having issues, specially at night with slow uploads.

Chatted with a an online Rogers tech last night and all she said was to wait it out for a day or two.

Call Rogers and explain that others are experiencing this issue. Hopefully they run a test and see this effects multiple people on the Node, and will get maintenance involved.

zeny12
I Plan to Stick Around

I believe the issue is due to my signal strength? I am unsure. I use the CGN3ACSMR modem/router from Rogers. I am on the 250u plan.  I am also on the following firmware am I missing an upgrade there or something?

So the thing I get online is while gaming I start "skipping" around and actions I do in game makes me behave like I am skipping around and my weapon switching is all glitchy. 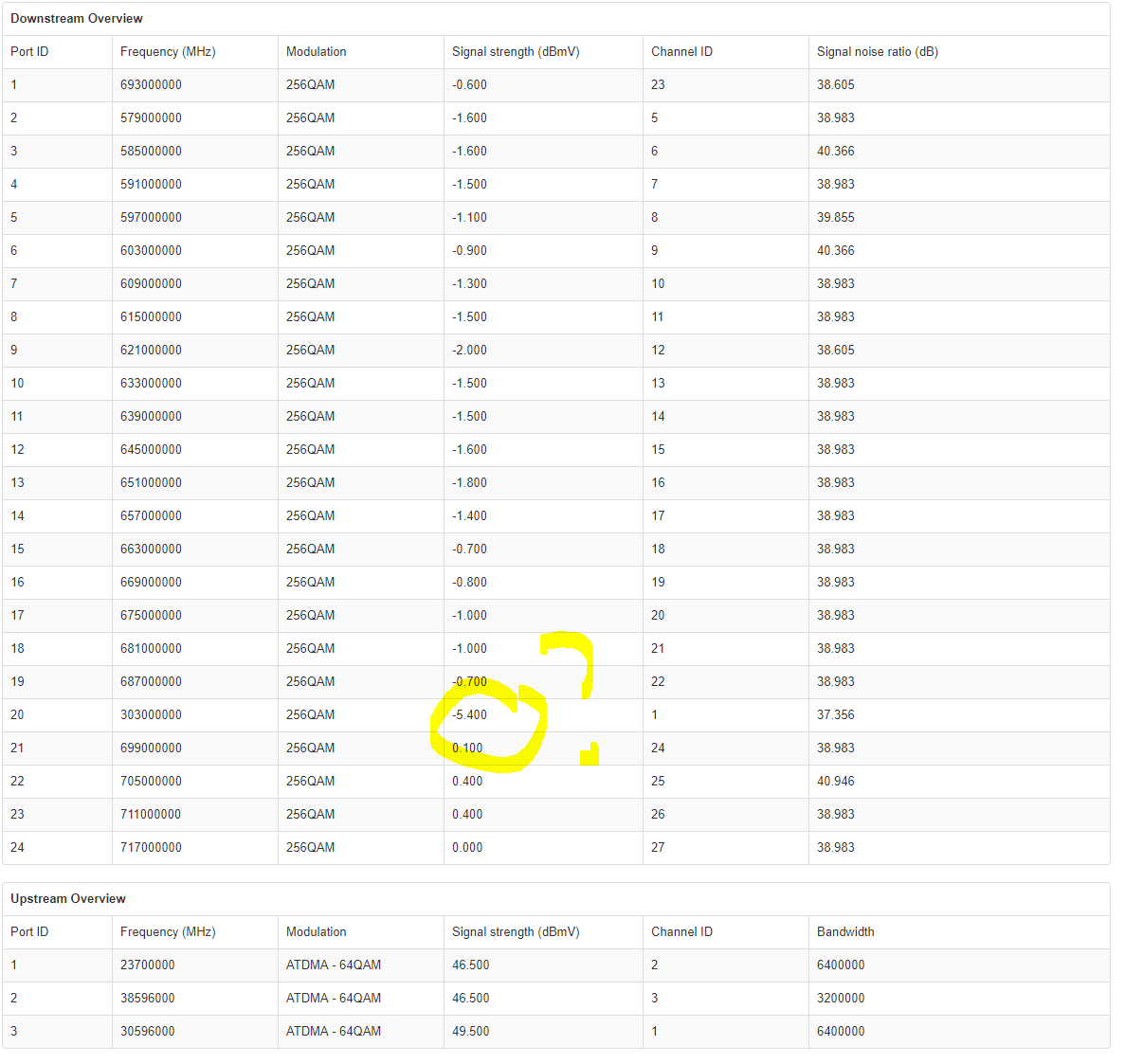 @zeny12, your downstream signal levels and signal to noise ratios for the most part aren't too bad.  There is one channel that is down as you pointed out, but, I'm not going to panic about that at this point in time.  The target for the downstream is 0 dBmV with a signal to noise ratio in the 36 to 40 dB range.  The modems DOCSIS 3.0 signal limits run from -15 dBmV up to 15 dBmV, although, in practice, customers usually see issues long before the limits are ever reached.

The upstream signal levels are elevated above their normal range which is usually 36 to 40 dBmV.  So, this indicates that the Cable Modem Termination System (CMTS) which the modem connects to is commanding the modem output to run higher.  That could be due to noise in the 20 to 40 Mhz range, or a possible issue with the external cable and/or connectors.  The upstream signal levels are still within spec however so, Rogers won't do anything at the present time, considering where they're at.  The upper limits are 51 dBmV for three channel operation, although Rogers uses 52 dBmV.  At that point I would expect the modem to shut down one or two channels in order to maintain comms with the CMTS.  If you were there, you would know it, as your data rates would be drastically reduced. So, you should have at least three upstream channels running.  If you ever see one or two channels only, then its time to call tech support to run a signal check on the modem, which should automatically fail due to the missing channel(s).

For now there are a couple of possibilities.  The first is that you're on a heavily loaded CMTS.  So, in the evening or on weekends when your neighbors are home, gaming, streaming, etc, etc, the load thru the CMTS increases, perhaps to the point that you start to see upstream congestion, which will cause transmission delays and potentially slower data rates as the data receive acknowledgements might run slower than they should.

The second is that you are experiencing packet loss, as you suspect.

In order to look at the second possibility first, do the following.

1.  Bring up a command prompt and tun a trace to anywhere:  ex.   tracert -4 www.google.ca

2.  Run a ping to the CMTS, and just let it run.  I would suggest a 24 hour run, but if you wanted to run a one hour test, try that first:  ping -t xxx.xxx.xxx.xxx  where the address xxx.xxx.xxx.xxx is the 2nd IP address from the trace.  The return time should be in the order of 8 to 13 ms for a normal response time.  If you see times in the several tens of ms in the evening or over the weekend, then that could be a sign that your particular CMTS has a heavy load on it.  At the end of the run, use "Control C" to stop the ping test.  Have a look at the results shown, looking for the max ping time and for any indications of packet loss between the modem and CMTS.  You shouldn't have any packet loss between the modem and CMTS.  You might see an odd one or to case of packet loss, but, if you see a few percent, then there is some issue afoot, most likely with the external cable and/or connectors.

Fwiw, if you were to download and run Pingplotter, it will produce a plot automatically.  I personally don't trust pingplotter for packet loss indications as it can generate false packet loss indications for ping tests to the CMTS.  The normal command ping will confirm or deny the possibility of packet loss.  In any event, if you ran Pingplotter at its default 2.5 second intervals, you should be able to plot the entire day, without any data averaging on the displayed results, which Pingplotter doesn't advertise.  At 2.5 second ping intervals, the plot would show the latency to the CMTS and you should see if in fact there was much of a difference between the very early morning hours and evening hours where the heavy load times occur.

Now, fwiw, I've asked someone to do this recently and saw that the ping test results had high ping spikes times to the CMTS.  Thats a modem issue.  Times beyond the CMTS are fine.  So, if you see that you are getting a reasonable time, 8 to 13 ms, and mixed with that are times in the 30 to 40 ms range or higher, switch targets and use Rogers Domain Name Server as the target for the ping test.  The address to use is 64.71.255.204

So, give the ping test to the CMTS a go, looking for packet loss, but, if you do see high ping spikes, switch targets and let that run as long as you want to.  I'd like to see a 24 hour run via ethernet connected pc or laptop.  Please let me know if in fact you see ping spikes in the modem to CMTS results.

Final question, are you gaming via wifi or ethernet connected device?

Message 70 of 186
1,678 Views
Report Content
Reply Reply
0 Likes
Where do you want to go?
Topic Stats
Recent Knowledge Base Articles
View All