First and foremost, mods, please don't merge this post with the "Throttling RTMP" thread. That thread has gone unanswered long enough (10+ pages) and this issue needs to be addressed by a Rogers employee. Believe me, I am not trying to be passive aggressive, but whats the point of telling people to reach out to the community forums if posts with effort put into them are just buried into inactive posts?

My problem can be best described as follows:

Many other community members have been suffering the same issues.

DSLReports members reporting the same thing (many other threads like it).

Here is a fairly large Twitch streamer who also suffers from the same issues on the Rogers network.

I believe I have ruled out any hardware related issues because

The farthest that talking to livechat has gotten me is a tech visit, but what's the point of the tech visit? My signals are well within spec. The tech is just going to tell me that my connection looks fine and it's on Twitch's end. Even if it is a case of throttling and/or routing issues, what is one customer complaint going to do when it's a problem of this magnitude?

Ever since Bell laid fibe in my neighbourhood, they've been sending reps door-to-door twice a month or so, and they offered 300/300 for 60 bucks (not permanently, the price skyrockets after a year as usual).

I know it's not sweat off anyone's backs if I switch, but I've been with Rogers for five years now, and was recently offered a seemingly good deal when I called to upgrade (I thought I could finally broadcast with 15Mb upload). Rogers has been excellent in every other regard, and I want to make this work. However, none of the technical support live chat people have any answers, the network engineer "signal testing" always comes up empty-handed, and now the last avenue I can try (the Community Forums) has no answers as well.

Is this just a case of employees not admitting that Rogers is throttling because it's downright illegal and a legal liability?

Hopefully this post isn't just slapped onto the other one. Despite all of the things I've tried, questions I've asked, and people I've reached out to, no one knows the cause and/or doesn't want to talk about it.

I'm all out of options and just want to reach out for help one last time.

Any ideas, suggestions to try, or help is greatly appreciated.

Not a rogers employee here, etc..

But from your listing of things there.. and some of the semi findings/solutions..
I would tend to lean towards a ROUTING issue than throttling.
Mostly from the fact that that going through a VPN, your changing potentially from where its connecting to the servers from, and taking another route.

Thanks for your suggestion.

How would I go about testing if it is a routing issue? I ran some PingPlotter tests to each of the each of their ingest servers (reminder that only Twitch is problematic): 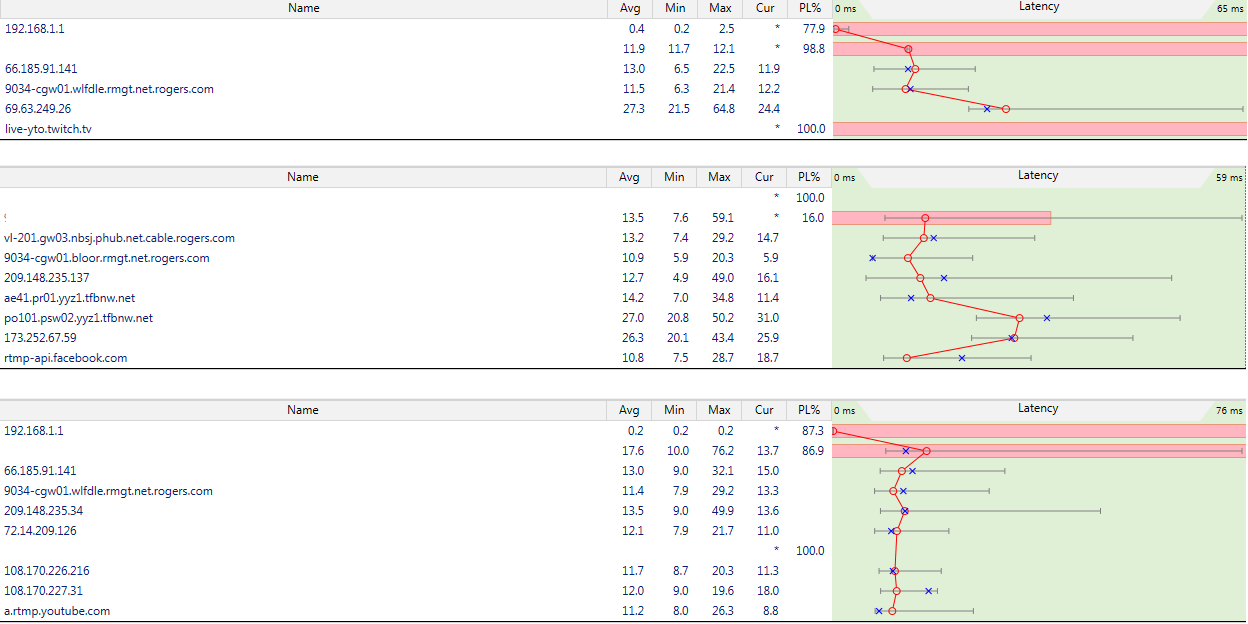 I'm not too sure on this, but wouldn't another explanation be that VPNs encrypt data so that ISPs are unable to throttle and/or properly apply traffic shaping?

In both cases, whether it's a routing issue, or a throttling issue.. what would you recommend is the best course of action to get someone to look at it?

Just to add a couple of comments here, your Pingplotter plots show excessive packet loss for the modem and second hop.  That's caused by a modem timing issue and results in Pingplotter displaying false packet loss indications.  To confirm that, you can run a command line ping test to those same addresses.  They should result in no, or next to no packet loss.

The packet loss at the Twitch address leads me to think that the server is set to ignore ICMP pings, and as a result the loss result is 100%.  Thats not a surprise.  Looking at the routing, from your modem to the Twitch address, its all Rogers, that means that there is a problem with the modem or a problem with the Rogers / Twitch interface.  Given the fact that you've indicated no problems streaming to Youtube or Facebook at high rates, I'm wondering if Twitch is using some variant of the RTMP protocol that the modem isn't processing correctly.  Only Twitch would know that, or, if anyone compared the upstream data for all destinations, any differences should be evident.  That would take a Wireshark monitoring session and data comparison to figure it out.  Beyond that, my thoughts would be that there is some issue at the Rogers / Twitch interface point that should be addressed.  Its a pretty short path from modem to Twitch, so there shouldn't be much to look at.  I'm wondering if all of the servers are actually showing up in that plot.  Rogers uses Cogent to carry a good portion of its data, so, is there a possibility that the data stream bound for Twitch is looping thru the U.S., without showing up in the path, and if so, is that causing some issues?  Only the network staff would be able to answer that question.

I've asked @RogersGordon to have a look at your earlier post.  Can't make any promises on his behalf, but, I'm hoping that his arrival back in the forums will help with issues such as this.

Fairly decent sized streamer here that had to quit because of this.

Your only option is to go to Bell, I've dealt with this for 2 years now.

There is no solution to it, If I had Bell fibe in my area I would switch instantly.

Yes, it is as you suspect, pinging the modem and router through command prompt yields normal ping results. The final Twitch hop is probably just set up to drop ICMP pings.

I sent an e-mail to Twitch asking about any potential issues/incompatibilities about 3 weeks ago, I have yet to receive a reply.. so I don't think I'll have a way to confirm if Twitch's RTMP differs in any way from the others. I'm not familiar with Wireshark either, I'd be willing to learn though.

That is an interesting point about potential problematic hops not showing up on the the plots, I didn't know that could happen.

Thank you for your advice

I'm still hopeful that this will get fixed. I've been with Rogers for quite a while now, and it's been excellent for everything short of uploading to Twitch, both performance wise and customer support.

This is obviously not some easy issue that can be fixed overnight. I am trying my best to be cooperative and supply as much information as I can give. If you look over on the other Twitch thread, there's not a whole lot of information engineers, and IT can work with, despite being 15 pages long. Compound that with the fact that we're all on dodgy modems and the problem gets even harder to diagnose.

Another factor is money. Bell's prices skyrocket after the promotional period (usually 1 year). The same could be said about Rogers, but they made a loyalty offer that I feel is pretty good (assuming this gets fixed in the near future).

I don't mean to derail the thread, but I didn't want to ignore a community member either.

Talked to him and he said he's still having issues with Rogers, he's on the old modem with 25/10 package.

Funny thing is that he said he's been using WIFI over Ethernet and has less issues. lol.

Is that with or without a 3rd party router?

I tried both.
With and without, no issues anymore.

Message 10 of 29
3,142 Views
Report Content
Reply Reply
0 Likes
Where do you want to go?
Topic Stats
Recent Knowledge Base Articles
View All