dallasdinatake
I Plan to Stick Around

@Datalink @RogersKevin and here is another test on my node

should be up now

@DatalinkSo I have several results of running pingplotter to the CMTS. 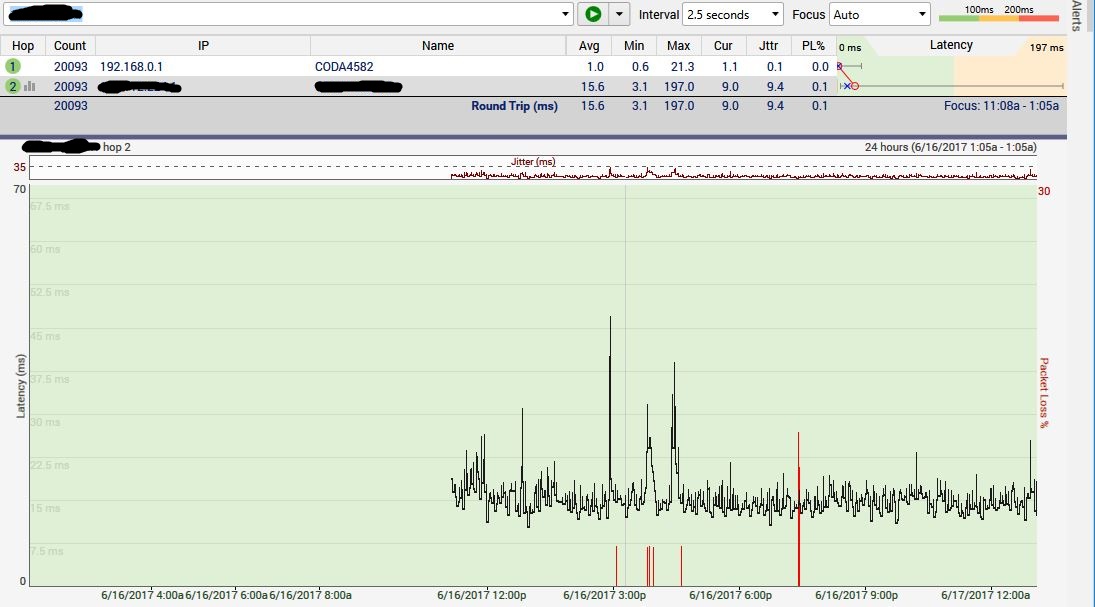 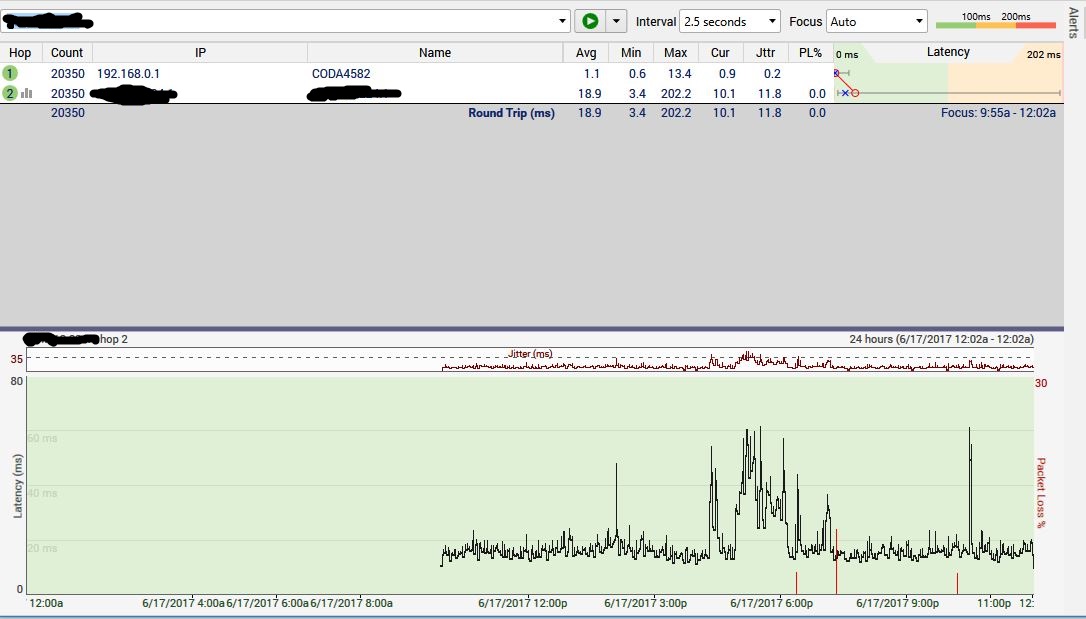 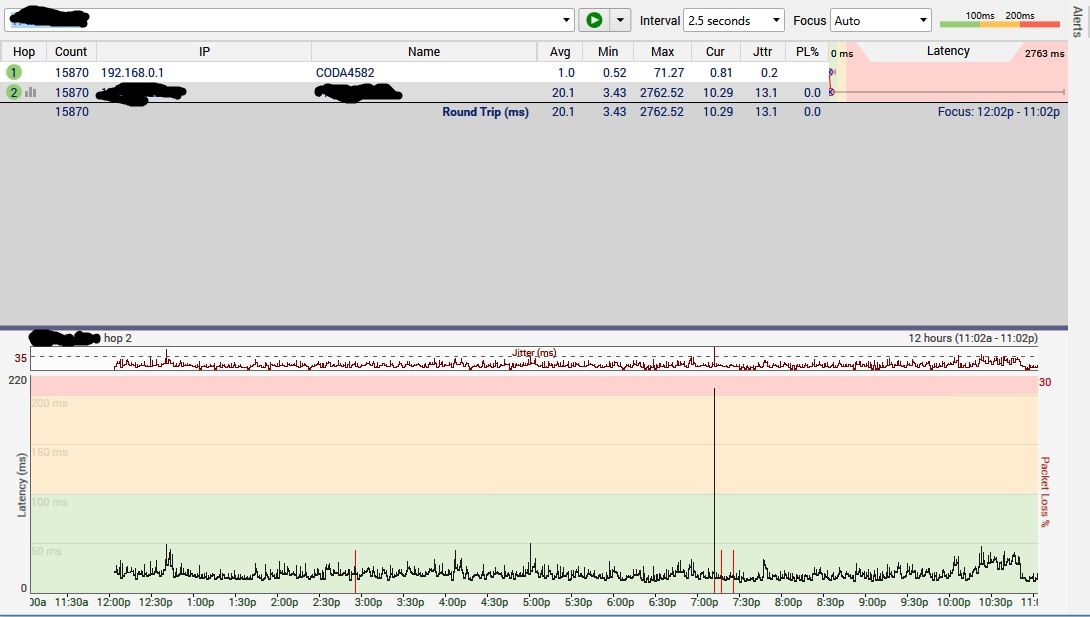 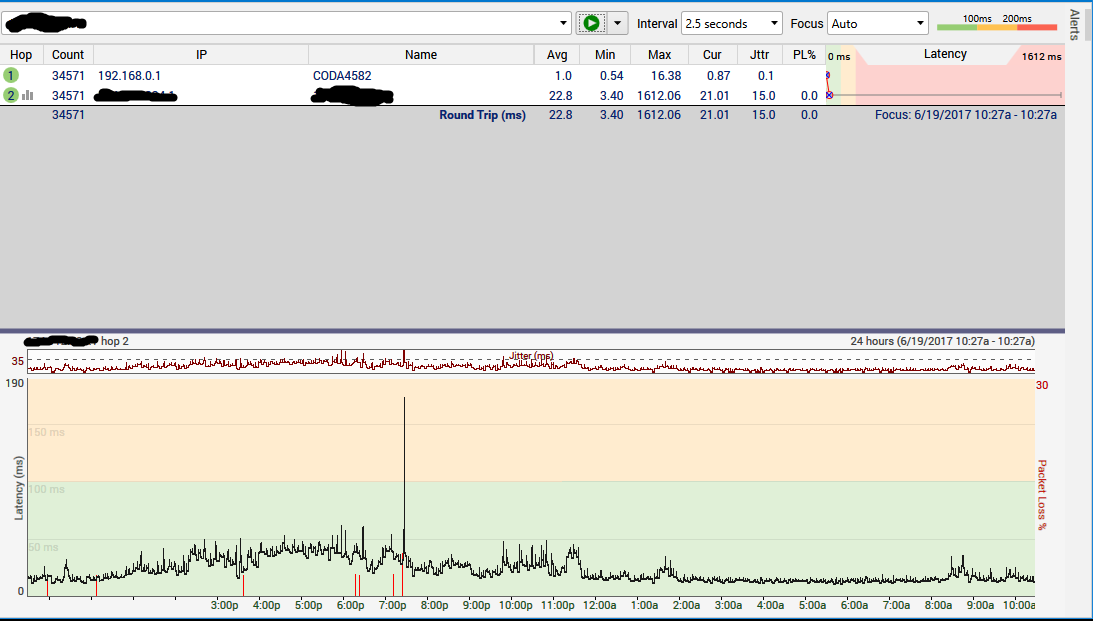 I ran most of the tests for around 13 hours, except the last one which I ran for 24 hours. Let me know what you think of the results.  I have the .csv files as well.

Also, I still think there is a problem with Twitch. When I try streaming to Twitch, my ping randomly spikes up to 400ms+. That huge outlier in the most recent test was during my stream. I turned my stream off and didn't see any other crazy spikes happen. I also get frequent buffering when watching Twitch streams, but I don't know if that has to do with the problems others were experiencing with the CODA modem or not. It could just be I notice the buffering on Twitch more than other sites. I can get the info that @RogersDave requested for people with Twitch problems, but I had trouble getting the info for "Video server or POP watching video from".

@Datalink did you have any chance on looking at the pingplotter test I have posted here and what do you think?
Message 125 of 599
2,147 Views
Report Content
Reply Reply
0 Likes

@lethalsniper, one overall comment that I have is that your time to the CMTS is high.  That time should be down in the 8 to 13 ms range or lower.  However, those two runs are very short.  I'd like to see a 24 hour run to see the min time in the very early morning hours and the max times later in the evening.  A 24 hour run will tell you a lot in terms of latency and possible packet loss issues that might arise during the day.  And just to note, each day will be a little different from the others, so, one can't generalize other than saying that the weekdays should show low times in the very early morning hours and "potentially" higher times into the evening, maybe double or triple the times that you might see in the morning hours.  But, that is highly dependent on the CMTS load during the day.  The only way to really see this is to run Pingplotter for a week, to see the difference in the weekday and weekend latency to the CMTS.

Another note on the first plot is the jump in time from the last Rogers server to the first NTT server.  Thats an average of a 17 ms jump.  After that point, the remaining average times run higher.  That is something that Rogers would have to address with NTT.  Don't know if its a joint issue or one that Rogers can fix on its own.  That is something that @RogersKevin or @RogersDave would have to address with the network staff. 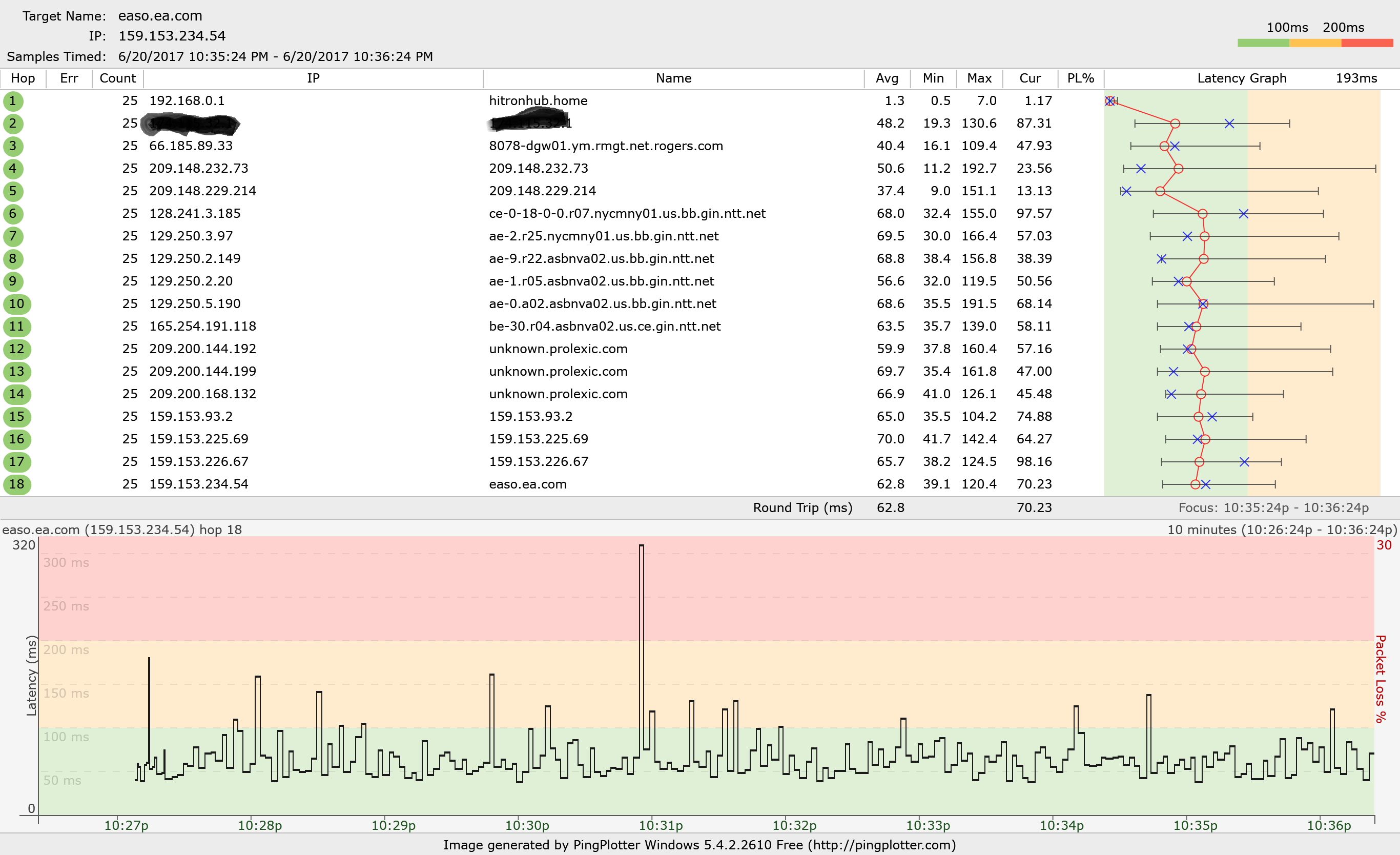 Quick question re: DHCP lease times, currently in my area (Brampton, ON) set to around 54 minutes.  This breaks tcp streams, vpn and gaming lag/disconnections.  Any idea, @RogersDave or @RogersKevin how long the renewal time will be so short?

Edit:  Testing continues...  an hour later and a full minute of outage;  will monitor for a couple days to see if it settles.

The normal DHCP lease time is much longer than 1 hour, it should be 1 day I think. The renewal also does not create a 1 minute outage.

Now if you experience these symptoms, there must be something else going on that should be investigated further.

Message 130 of 599
1,908 Views
Report Content
Reply Reply
0 Likes
Where do you want to go?
Topic Stats
Recent Knowledge Base Articles
View All