I would guess that the work done was on the 18th?

Things improved from unusable on the afternoon on the 18th after a short outage.  There is still packet loss around 5% during evening hours, and speratic packet loss throughout the rest of the day.

I did call in again last night and was promised a phone call back that never came. Another call in again this morning and I asked to escallate. I spoke with Chris who seemed to take ownership of the issue.  Noise was noted on the line and we rebooted the modem. Chris advises after the reboot my noise levels appear to be back to normal.  Chris has scheduled a tech to come to the house to check things top to bottom and insure there is no noise within the house. Chris further advises he will follow up with me tomorrow to see how things go.

Thanks for checking. I will try and continue to update the thread.

Thank you for taking the time to update us. I'm glad to hear that the issue has gotten better and that a tech is being sent out to check everything from top to bottom to ensure you are running at optimal speed.

Let us know if everything is resolved once the technician visits your home.

Thought I would update as it has been over a month since I reported my issues here. I have been a customer since October having problems since day one.

I have had several visits to the house, I have spent dozens of hours on the phone, I have received several automated calls and emails reporting my problem is fixed. Well just a couple days ago I received word that a resolution may actually be coming. From what I can read between the lines of everyone I have spoken to, our community is over provisioned. Too many people using the bandwidth available. This jives completely and is in fact what I have been trying to tell people it is from day one. During peak hours do to over utilization ping goes up and packets are dropped and in the end my internet and anyone else in this area can no longer surf, watch Netflix or send emails.

So here we stand…. More waiting, I am happy we are moving in the right direction. The Roger techs (true Rogers, not the outsourced guys) that have been to the house have been great. They have become my only source of feedback and updates. To them I say thank-you.

So we limp along for the next little while and hope Rogers can fix this sooner rather than later. Can anyone from Rogers advise if there is a rebate or discount that can be applied in the meantime?

Call Rogers Customer Service, billing perhaps, and advise the CSR of the situation.  He or she should be able to pull up the records on file.  Advise him or her that you're looking for a rebate for the poor service up to this point, and a reduced rate going forward until the issue is resolved.  If you don't get an acceptable response, ask to speak to the next level up, a supervisor perhaps.  Keep going up until you receive an adequate response.

If you load something like the freebie version of Pingplotter, and run a test to a server somewhere, you will most likely be able to see the delays at the second or third hop, the first being your modem.  Pingplotter produces an easy to understand graph that will illustrate the ping delays and maximum delays that are seen at each hop.  Keeping an eye on that will tell you when and if progress is being made.  Right click on the graph area to select or deselect some of the display options.

I have been running Pingplotter in demo mode and actually just ran out of time about a week ago. I was using the Pro version so I can keep a visible history over time. If you look up in the thread I posted a few screenshots of how it looks. As my trial had expired I have setup another one in a VM to get another 30 days. I also have it running at work as we have a residental Rogers line dedicated in my office. Amazing the difference there to here.

I was hoping that maybe one of the Roger Empoyees that have comment on the thread might help me out without yet another call in. I will leave it until Monday or Tuesday then make a call.

I'm in Ottawa and I have been having a similar problem dealing with Rogers and packet loss. My problem has been ongoing off and on for roughly a year now. I have had so many tickets opened and closed I've lost count. The latest ticket I opened for the issue has been open for well over a month now. My packet loss has been verified on thier end several times and was even expressed on the phone to me that there were neighborhood packet loss issues yet everytime it gets escalated to thier engineering team they close the ticket and claim there is no issue.

I am not sure what got Rogers Attention. I know the techs that came to my house were very helpful and appeared to be pushing for a true resolution. Roger Folks here I think may have taken an interest as well. I think posting the Ping Plotter results shows true impact if it is in fact time of day congestion. If you look at my earlier ping plotter charts from earlier you can clearly see the packet loss and time of day slow downs. If you are still not getting the attention required you can try emailing the office of the president as well. Although my problem is not resolved I did not have to go to this level.

I have not yet called to discuss compenstation for the lack of service yet. It should be an interesting call though.

Well I called in last week as the connection was as bad as its ever been. 5 - 10% packet loss a couple nights in a row. After having a teir 1 agent have me reboot the modem, and advise me there was a power outage and it might be causing my issues (for the last 4 months or so) I escallated. I should have wrote down the ladies name but I forgot to.

Anyways she made some calls and came back to advise that on 26 Feb there was scheduled work to our node. I had previously been told they were re-segmenting (breaking it in 2 if I understand correctly) but she advised that they were simply re-balancing traffic. Further she advised she would call me back on Monday to confirm everything was good.

Well the 26th has passed. There was no outage on my line of any amount and as far as I can tell nothing has changed. I am curious if work was done or not. I am curious if I waited for months for nothing with poor and often unusable internet in the evening hours.

I will wait and see if I get the call back on Monday as promised and what if anything has been done.....

Do you happen to have the ticket number for the work that was going to be done.  If so, you could call back, speak to a Tier 2 CSR and enquire about the ticket number.  Alternatively, you could just ask if any work as been completed on the node.  The CSR should be able to look that up.

Well I got the call back! Wahoo, Rogers actually called back when the said they would. In dealing with this problems for months, this is the very first person to follow through and call back as they advised they would. Good Work Phyllis!

Phyliss advised that she followed up with Engineering and the issue has been resolved. I was not advised what was done, just resolved. I would have asked more questions but I was mid Tim Hortons Drive-thru. How Canadian J

Well tonight I thought I better have a look despite wanting to head to bed. Monday night is typically one of the worst nights. And I can see it really has not changed. I am seeing packet loss in the 2 – 5% range. Speed test fluctuate from close to full profile speed (250/10) to as low as 30/5 I have seen on several passes.

As I type I am on hold for Tier 2 Support. I am curious as to what is going to happen now. I suspect I will be escalating the Office of the President Tomorrow. As it stands I have made dozens of calls to Rogers Support to deal with this. I have probably spend 20+ hours on hold with them at this point.

Well Robert from Tier 2 is on the case….

Here are some screen shots for you amusement. 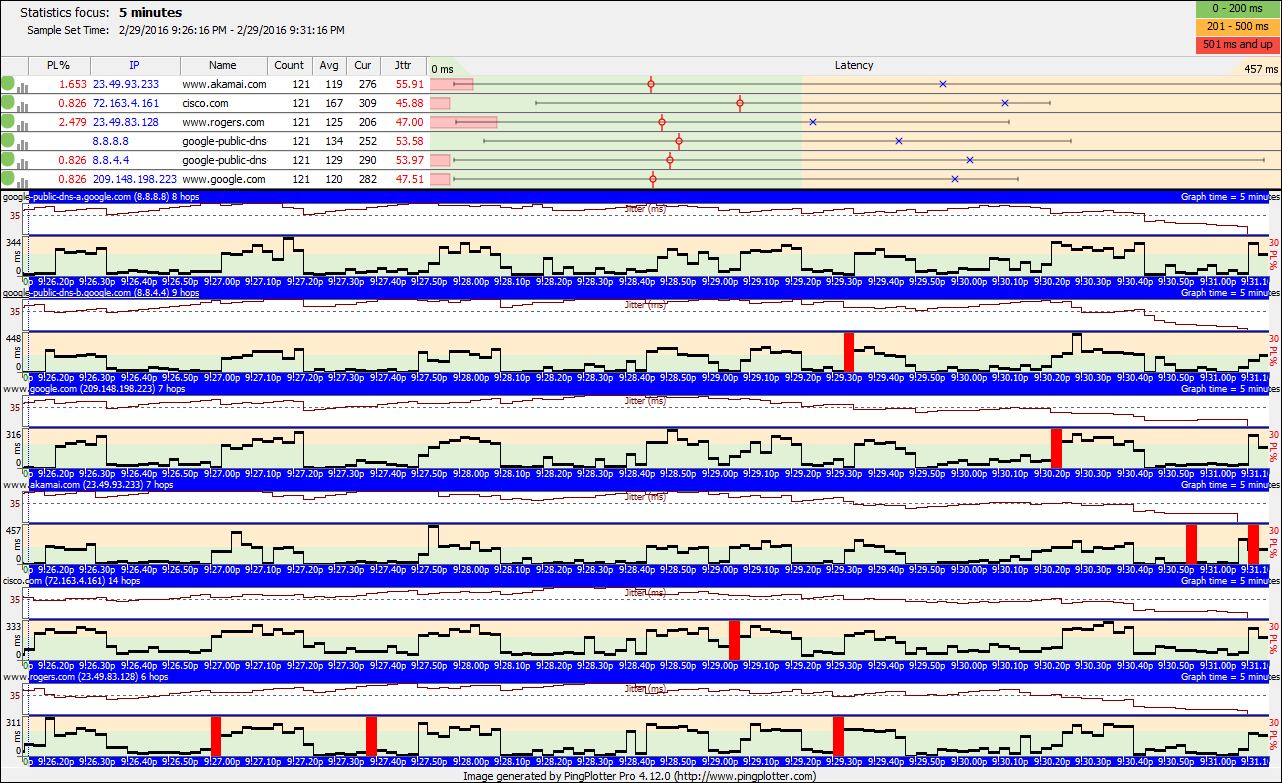 Message 20 of 28
889 Views
Report Content
Reply Reply
0 Likes
Where do you want to go?
Topic Stats
Recent Knowledge Base Articles
View All