So last nght I finally got a tech to open a ticket for the slow uploads in the evening. She asked me to reboot the modem and then said my node has to be repaired based on the reboot. (shrug)

However, she  couldn't provide a timeline. She just said I'd get a phone call once it is fixed.

Has anyone here gone through this, how long did it take? 2 days, 2 weeks, 2 months?

@yyzsam Since the speed drops during peak/busy hours this is a congestion issue. Hopefully the Engineers do some work on your node to alleviate the problem.

Rogers needs to provide us with benchmark criteria. ie. If you are on the Gigabit plan what are the expected speeds. We all understand that it can vary, depending on traffic patterns....but there has to be some guide line. It cannot be from 1 - 1000....but for Ignite 1000....perhaps 750 - 1100 should be expected as a variance. Anything lower needs to be addressed.

What does Node rebuilding entail.....Placing amps on the trunkline and distribution points or ? How can we find out how far we are from the CMTS Server and nearest Fiber Tap? I strongly believe, most of our Speed issues are Infrastructure related.....Those closest to the Fiber tap and newer areas have the least speed issues. Older areas, like me, require more Infrastructure upgrades to see improvements. Barring any specific connectivity issues...the new Coda modems are stable. It's not a Docsis issue since 3.0 can handle up to 1Gbps and 3.1 up to 10Gbps. That's why those on older modems with 3.0....have no speed issues unless they live in older areas and require Gig speeds.

Got support to open another ticket last night. Why they closed it or didnt open another one when I mentioned it wasn't fixed I dont know. Trying to be patient for a little longer.

Still waiting since December 2016 for a fix , got a call from Rogers ambassador yesterday telling me they are looking into it and getting this resolved
0 Likes
Share
Reply

hiho
I Plan to Stick Around
In response to lethalsniper
Options

18 months from start to finnish before my speed issue was fixed but it was finally fixed 🙂  15months of that time i had the Office of the President wrking with me on it...

yyzsam
I Plan to Stick Around
In response to hiho
Options

I'll cancel my service or expect a serious discount before I go that long.
0 Likes
Share
Reply

bhaskarp
I Plan to Stick Around
Options

Thanks. Did u get your fixed yet ?
0 Likes
Share
Reply

Thank you for posting your concerns on the Community Forums.

We'd like to look into your issue and concerns regarding your services and signal issues. Please send us a private message to @CommunityHelps to get an update on the tickets and services in your area.

yyzsam
I Plan to Stick Around
In response to RogersPrasana
Options

Thanks for jumping in Prasana, PM sent.
0 Likes
Share
Reply

So another month and no resolution insight. Last week they said maintanance fixed noise on the line but i'm still only getting 2-3mbs uploads at night, sometimes as early as 3pm like today.

Good news is I just found out Bell's FTTH is finally available in my hood. Been watching their crews working in the neighborhood the last few weeks.

They offered me 300/100 unlimted for $79/mth no install fee. Might be time to leave Rogers after only 3 months. Should be fun trying to break the contract.

So now they are saying it's not fixed and I should not have received that call. I don't know who to believe.

I told them they have until the end of the month to fix it. Then I move to Bell. Crazy, I haven't been with Bell since 2001.
0 Likes
Share
Reply

RyzenFX
I'm a Reliable Contributor
In response to RyzenFX
Options

I've been enduring a node issue for quite some time now and to be completely honest, the lack of details regarding the the progress that was made in the ticket has been frustrating. Rogers should seriously consider improving the communication between the technical teams and the consumer who is facing the problem. They should give the consumer the explanation for why it is taking it so long, and give them a clear context of the situation.

Rogers shouldn't just update the consumer by saying "we're sorry it's taking so long, our technical teams are working on it," but instead give them an explanation for why it is taking so long. If the problem isn't solved for a while it could get really annoying and the consumer could feel like there's no progress being made since they're receiving the same message over and over again.

They should give the consumer facing the service problem "real" updates, so the consumer would understand why it's taking so long and thus, not become frustrated.

If Rogers is able to improve the level of communication between the technical teams adressing the problem and the consumer facing the problem, we would be seeing alot less frustrated customers.

RyzenFX
I'm a Reliable Contributor
In response to yyzsam
Options

They're offering you a pretty good deal, plus given the advantage of FTTH over DOCSIS, it's pretty much a no-brainer.  I know how you feel about the issue, I've been going through the same thing, it sucks that they take so long to fix these issue and they don't give you an a reasonable explanation for why it's taking so long. You do start to consider if they're really working on it or not, given the same update messages sent over and over again.

I have a ticket open since December 2016 for speed degration due too congestion in node and still no fix yet !!!! And nobody can explain to me why
1 Like
Share
Reply

yyzsam
I Plan to Stick Around
In response to lethalsniper
Options

....and it just keeps getting better and better. 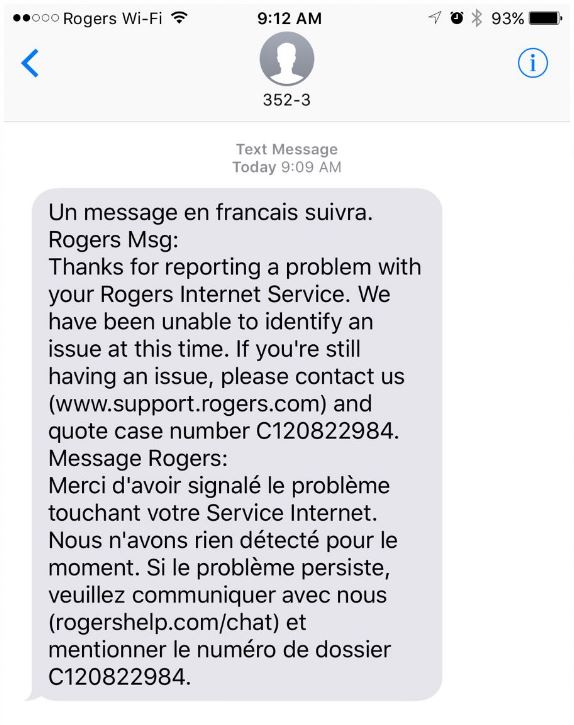 So back to square one now...

BS
I'm a Senior Advisor
In response to yyzsam
Options

Been through this a few times - when you set up the next one, escalate it to the next tier - and also esclate to service concerns, as it impacts your ability to consume the service - may be able to get compensation, but still doesn't solve the issue though - frustration galore - sympathy for you, the worst was only 3 weeks for me.  I would be gone if that long - go to a third party through telephone lines - you will at least have service, as long as Bell's system doesn't fail in your area too .

Well now they are saying it could take months. No way am I waiting months.

Rogers should be proactive not reactive. You don't wait until you run out of gas to fill up your car, you fill it up before it runs out.

I don't even think it's a node/congestion issue, something else is happening at night that is causing slow uploads.

Anyhow, I've asked them to cancel my account. If I get any resistance I'm cancelling my cell phones too.

So lucky that Bell rolled out FTTH in my neighborhood recently.

yyzsam
I Plan to Stick Around
In response to BS
Options

@BS They offered a credit once the problem is fixed. But I don't want a credit I want it fixed and I don't want to wait 2, 3 or even 6 months for it.

If its at night.. its much like my issue was.

Either A) Yes, it could be congestion.. that its just over saturated.. under regular load its not bad.. but when it gets under HEAVY load.. it cant handle it all, and it drop.

B) A signal related, which only happens at the time of heavy load.

Either way.. a real pain to get them to fix, also depending on where it is 😞
(underground? Wont happen likely for a bit, with the ground frozen, etc)

Well it's official, my account has been canceled. No argument, no cancelation fee and they gave me a one month credit. Off to Bell now.

Good luck to those that are still suffering, hopefully it gets resolved for you soon.

Assuming it's congestion then downloads should be affected but they are not. I can get a full 330 down but have 2mb uploads.

I'm downtown so everything is overhead.