I'm a relatively new customer to Rogers (though I'd used cable through a TPIA provider several years ago with no major issues at all). In the past couple of weeks, I've been experiencing events of what I believe to be severe node congestion on the upstream side for the past week. The symptoms are severely diminished upstream speed (bouncing between 0.5 and 1.5 megabits), along with heavy latency (1000+ ms) when the upstream is used at all. When a similar event happened in December, a tech was dispatched but the issue resolved itself a couple of hours before the tech arrived.

But the speed tests do not: 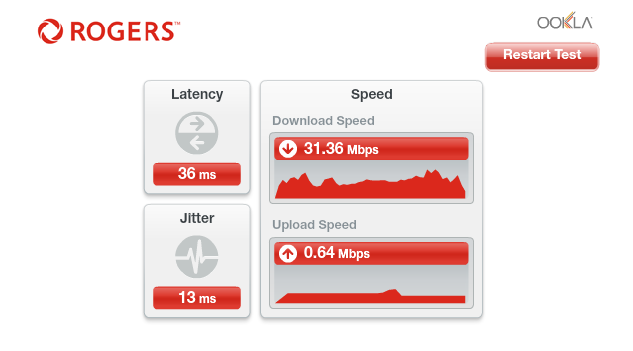 The historical traffic graphs from the past month tell most of the story:

I'm on the new NEW CODA-4582 with the black sticker wired-only in bridge mode and using a Mikrotik RB2011 router which should be good for a gigabit of throughput. Roughly once a day, I'll do a factory reset on the modem and retest with just a laptop plugged in to the modem in the hopes that will change things. Thus far, it has not.

Thank you for joining the Rogers Community Forums and posting your concern. We can check your connection as well as the area for the issues you have mentioned, please send us a private message at @CommunityHelps. Please check our blog if you require assistance with the private messaging.

@ElegantTetris  I am glad @RogersMoin has tried to provide you with a path towards a solution.

In my case I have called in my loss of connection twice and I have been met with request to do more troubleshooting like bypass the power bar, bypass the router, reset the modem, etc. One fellow even told me see if it happened on another device before he would take any action.  Make sure you ask Tech Support when they have recorded your outages so you can compare your data.  Note that I also asked if there was any maintenance being done in my area and I was told no.  That was very interesting as I had two trucks from a company called TANDAM on my street installing a fibre-optic line for Rogers as I was speaking to Tech Support on the phone.  So make sure you keep good records of your efforts.

In my case I had been tracking the connection to the Rogers Yahoo  IMAP server and I had screen captures of the almost daily disconnect occurrences.  The last request, after telling them it was happening on my iPad, was to try monitoring the connection to another server like Google which I did. Today around 10:15 I lost my connection while on Google.

When I checked pingplotter I was disconnected for about 4 minutes. All this to say that I wish you luck getting help. It seems to take a long time before anyone believes you. 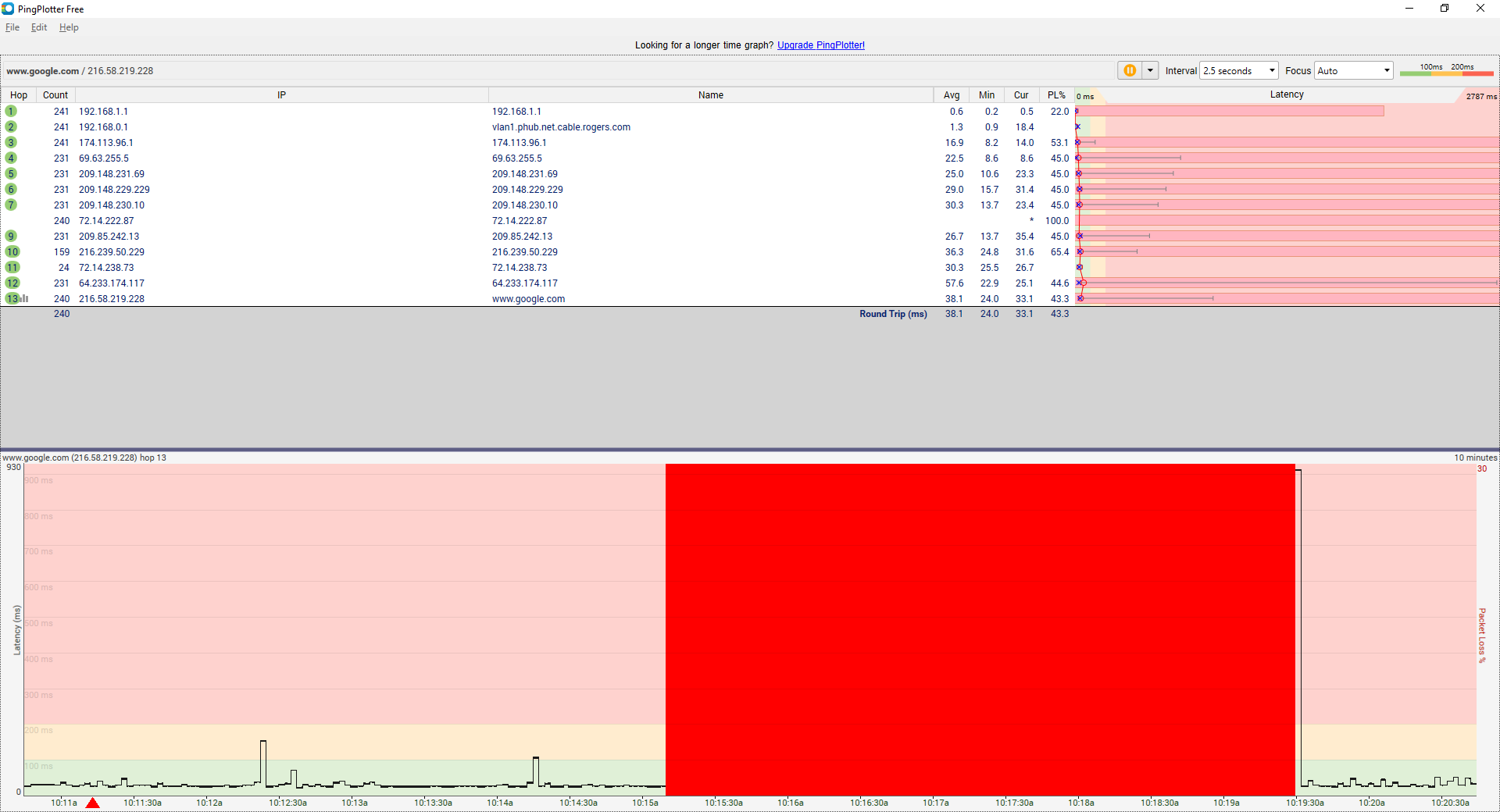 I was having a long term issue that happens almost every night where something drops the signal quality on my TV Service.   It was very random at first and started in around October.   On random nights a few channels would drop out and others would lose signal quality dropping audio and video. A service tech came out found noise and it still continued.  Called technical support again and was told, it maybe a neighbour with faulty equipment and they would try to contact them.  Noise still seemed to happen randomly.

Fast forward to last week the 6th to the 9th it got much worse, internet speeds dropped to the kb range on a Gigabit line, tv went out for two days and home phone went up and down at random.  Neighbour next door also lost service and a service tech they called came by and seemed to fix an issue with the cable box on the side of the street which brought my services back online at around 10 am Monday the 9th.  The service tech I booked came at 5pm did some diagnostics on the modem seen some spikes of noise tried swapping my coda-4582 for CGNM-3552 to see if that would help with speeds it didn’t.  The service tech wasn’t able to get anymore then 10Mbps.  I asked if he could swap the coda back, he did but it was incorrectly provisioned and I had to call tech support again to get it fixed.  This took 3 calls and 2 days to fix.

Service was fine for week.  All services worked,  internet speeds seemed normal.  However on January 13 the problem came back, from around 4:30pm the TV service, Internet service and even home phone service all had problems.  Home Phone had random static sounds, TV service again dropped channels and lost signal and Internet once again would get no greater then a few Kb to a few Mb on the downstream.   On the morning of the 14th everything was fine, however at night internet speeds would drop.  This repeated on the 15th.

Called technical support and another service tech is coming today at 4 to 6 pm.

The drop outs go as follows:

January 13 4:30pm to Morning (all services had issues)

They seem to be in time with the noise spikes.   However the modem was reset during testing with tech support, so some logs got lost.

This morning everything seems to fine once again.

I am hoping the service tech today can find the issue. Anything I should tell them when they come?

Recently I have very slow connection to my web servers

Hosting supports ask me to do a tracert in CMD.  Find there shouldn't be that many time out. They think it's ISP's problem.  is it bad?

I can definitely understand the need for a speedy internet connection to your web server. Fortunately, you've come to the right place! I'll invite a few of our very knowledgeable Resident Experts to give a hand.

If you can kindly provide @BloodySky with your insight, it'd be much appreciated.

@BloodySky, just as a quick comment at this point, the time to the second hop is higher than what I would expect to see.  It should be down around 8 to 13 ms.  Can you run an extended ping test to 174.119.192.1 to see what the average turns out to be:

Please post the bottom test results.  I might ask you to run Pingplotter to see the response time to the CMTS during various times of the day.  Please have a look at the linked post regarding the use of Pingpltter to monitor the modem to CMTS path for packet loss and latency:

you could try changing your DNS servers, it may take a different/faster path to the website.

Google or Open DNS are both good options.

Yes, but, changing the DNS won't change the time to the CMTS.  There's only one path from the modem to the CMTS, no matter what DNS you use.

Just fix it. Dont pretend there is no problem.

Message 30 of 76
1,941 Views
Report Content
Reply Reply
0 Likes
Where do you want to go?
Topic Stats
Recent Knowledge Base Articles
View All