Hitron
Status
This menu show the status of the device

@sti2006 wrote:
I been getting the same issue and call Rogers CSR twice and 1 technician came out and took out the splitter in my basement and install a power amplifier and he says is passive. Will help and not distort other output. Issue continue and call in again they ask I go swap out my modem to the new Hiltron Coda version and last night has the .19 firmware and still keeps dropping for a few minutes and comes back for a few more hours and does it again.

Below is a small example of the event logs

@sti2006  Where did you find the DOCSIS event log for your modem? Maybe my CGN2-ROG modem doesn't have it.  Lots of info to read from 2014 here on:  Intermittent connection - DOCSIS Event log displaying critical errors

Just for info, I am still getting interruptions from 15 seconds to 4 minutes.

Example of the duration from 9:42 to 9:46 today for the imap.mail.yahoo.com server I have been tracking. 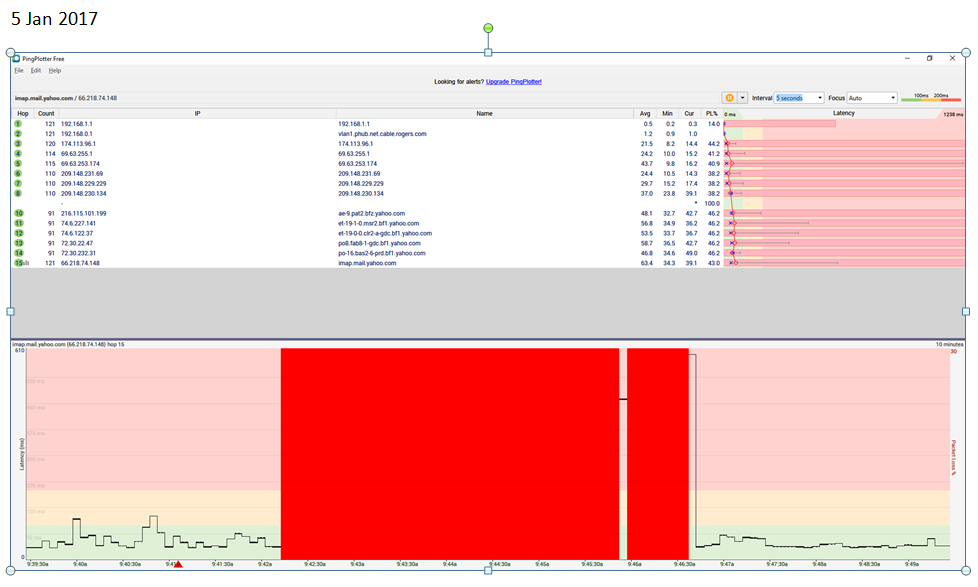 I've set up SmokePing on a Linux box I have and it's set to do the following:

I checked my CODA-4852 event log this morning and saw a ranging error overnight, which appeared to coincide with some high latency and a few dropped packets. This couldn't have lasted more than a minute.

Other than that, SmokePing shows some increased latency and jitter with all remote hosts last night (nothing terrible, mostly staying under 80 ms) until about 1:30 am, then very consistent latencies (20-30 ms) from 1:30 am til this morning.

The latency/jitter I'd expect from a busy node and peak browsing times, so I'm not too fussed about that. But I'm still wondering about the occasional "hiccups" that coincide with the ranging errors in the modem's log.

I'll continue to keep an eye on things.

mhs2
I Plan to Stick Around

I get this error "SYNC Timing Synchronization failure - Loss of Sync" at 2:00 pm every day in my CODA-4582 modem log.  I think I had the same issue with my CGN3ACSMR but didn't realize that it occurred at the same time every day.  It's not a big deal, but what would cause it to happen every day at the same time?

Something bad must have happened in my area yesterday. Guess I should happy I still have internet vs no internet? 😜 
I get this error "SYNC Timing Synchronization failure - Loss of Sync" at 2:00 pm every day in my CODA-4582 modem log.  I think I had the same issue with my CGN3ACSMR but didn't realize that it occurred at the same time every day.  It's not a big deal, but what would cause it to happen every day at the same time?

Over the 11 days in December 2016 that I tracked the imap.mail.yahoo.com server connection I was able to capture the lost connection time which all seemed to be about 4 to 5 minutes in duration. There were others that were 1 minute or less in duration and the loss of connection did not happen at exactly the same time each day, but it was close. I am leaning toward some daily check or update on the Rogers IMAP4Rev1 server that is used for emails. It seems this daily server event changes the IMAP data which ultimately gives you the "Your IMAP  server has closed the connection" error. I cannot be absolutely sure as only one of my Rogers email accounts constantly gives me this error message. The other does not!  1 to 4 minutes is hardly noticeable so I am sure most customers just think it is a glitch in their application, not with the internet connection. I would still like to get independent confirmation that the imap.mail.yahoo.com server does go offline for approximately 4 minutes daily before the next step of raising a trouble ticket.