Welcome to the Community Forums. I apologize for the delayed response.

I can understand how frustrating it is to have intermittent internet service. Are you still experiencing this issue now? If so, we'd be happy to look into that for you. Next time you're online, please reach out to @CommunityHelps via PM.

To learn more about Private Message you can visit this page here.

Have a safe long weekend,

I'm having the same issue with this new firmware.22 all handheld devises work except my acer laptop keeps on getting disconnected never had issue with.21
Message 22 of 528
5,594 Views
Report Content
Reply Reply
0 Likes

I made some account changes a week ago, now on the 250/20 using the CGN3ACSMR. Since I setup the modem I've been having these constant slow downs or disconnects. Rebooting the modem will get me back up to speed most of the time, but it only lasts 5 - 30 mins, then slows down again.

Contacted Rogers, but the Tech says nothing he can do, since the speed check while chatting with him was close to 200mbps. Of course, 5 mins after I hung up the phone, it slowed down to 43mbps.

Any help in fixing this would be greatly appreciated. 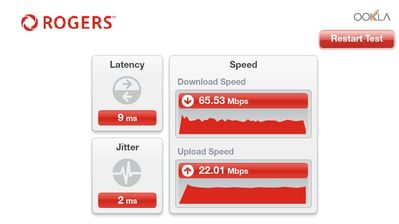 This menu displays both upstream and downstream signal parameters

WBarras
I Plan to Stick Around

Hi, I'm wondering if my signal levels are sufficent? I'm getting constant disconnects with a bunch of T3 and other errors on  my router logs for the past 2 weeks now. I'm wondering if it's my old wiring in the house that is causing this. However when I had the CGN2, it was not a problem (T3 timeout with reboot every 2-3 months) with the CGNACSAMR I'm getting one almost every night coming home from work.

Thanks in advance. Should I be talking to a tech person on the phone as soon ast disconnects the next time?

@WBarras, you have a high frequency roll-off occurring on the downstream.  The signal levels start at almost 0 dBmV, and by the time you reach 621 Mhz, the signal level is down almost 6 dB.  So, that in itself isn't a good thing but, even with that, the internet modem shouldn't be dropping off line.  The signal to noise ratios are good.  The upstream signal levels are low.  Normally they are in a 36 to 40 dBmV range, but, the modem uses pre-equalization on the upstream, where the CMTS indicates to the modem what transmitted signal level is satisfactory so that the signal arrives at the CMTS with the right level and signal to noise ratio.  So, that makes the upstream levels a little more difficult to judge.

You might be getting some very fast transient signal levels downward on the downstream that are too fast to display on that page.  That might account for the service drop outs.  The one way to see that is to load pingplotter and ping the CMTS to look for packet loss and any potential drop outs.  Let me know if you want to pursue that.

If the service drop outs are long enough to last thru a call to tech support, then that is the best time to call them.  Don't reset the modem.  Let the CSR attempt to query the modem.  The question at that point is whether the problem is just with your cable line, or if it also affects your neighbors or if its a wider area problem.  So, don't hesitate to call tech support, every day and more than once a day if necessary.  Put tech support on speed dial and don't hesitate to use it.

I've been having intermittent dropouts with my Rogers internet and thought to turn here for one last chance at a solution before I try another provider.

The problem: Sometimes the internet can be stable for weeks, then it will die 3-4 times in a few hours, or a few times within a week. All my devices, including those wired directly to the Hitron modem, are affected. Sometimes the internet will come back to life within a minute, other times it will take longer (up to 2 hours) and/or power cycling the Hitron modem. During the shorter outages, my Hitron often keeps the usual 'connected' lights on the front panel. Longer outages and the blue "up" and "down" lights go off.

I'll mention that we have fibre to the home.

The various setups I've tried: In the beginning, I had a Hitron CGN2 (wifi disabled), with one computer and an Airport Extreme (bridge mode, no DHCP) both connected via ethernet cables. I moved this setup to three different cable outlets in the house (two were dedicated; no splitters). After a few months, I replaced the CGN2 with a CGN3. For a while, I tried using the CGN3 as both modem and wifi router (i.e. the Airport Extreme was completely removed).  Currently, I'm trying something different: the CGN3 is in Gateway mode (i.e. no DHCP/WiFi) and only the Airport Extreme (with DHCP/NAT/WiFi on) is connected to it. My intermittent dropouts have occurred during all of the above configurations.

Rogers has visited twice: once to re-terminate all the cable jacks within the home, and a second time to replace the fibre-to-cable converter in the basement. Friendly techs both times, but no relief with the problem.

The CGN3 event page reports "no ranging response received - t3 time-out", and it appears to be around the time of my outages. However, some outages will happen without any events appearing in the logs of the CGN3. It's in bridge mode now so I'm not sure how to access the CGN3's internal web server anyways.

Yesterday was a particularly bad day - the internet kept dropping - so I left "ping google.com" running in a Terminal window (Mac) on a comptuer connected via internet. Over five minutes, the packet loss was ~36% (usually, it's 0%).

Any help would be appreciated. Given that literally everything downstream of the fibre optic cable has been replaced at this point, I don't think there's anything left for me to try.  Oh - throughout ALL of this, our Rogers TV service has been perfectly fine, and works even if the internet is down.

Update: This problem continues to persist. (It is certainly not solved, even though this thread is marked as such.)
Message 27 of 528
5,436 Views
Report Content
Reply Reply
0 Likes

It is marked as solved, as its another users initial thread, and their issue may have been soved.

I am not sure how many users here are familiar with fiber direct... i am not sure overall how different it is..
Though it appears to be using the same modems, etc... so i would assume most of the other stuff is the same, its only the delivery.  (so the troubleshooting on the fiber line itself would be different than cable, etc).

Are you able to log into the gateway and post the signal levels at a good time and a bad time? Just to see if there is anything there which may be amiss.

Last I recall, the signal levels were -2 dBmV down and 38.5 dBmV up. I can say that every time I've called a CSR and they've tested my signal levels (whether my internet was working or not),  the CSR has said both up and down are within acceptable values.

PS - I'd intitally created a new thread, but my post was merged into this one. Does anyone know of a way to mark it as 'unsolved' again?

Depending on what your model is.. (as some firmware seems to permit it and some dont) some of them you can access the gateway via 192.168.100.1


Was just asking, as if there is a DROP durring the Bad times.
But generally for good times, that strength isnt horrible if fairly consistant across all the channels.

Message 30 of 528
5,407 Views
Report Content
Reply Reply
0 Likes
Where do you want to go?
Topic Stats
Recent Knowledge Base Articles
View All