Getting disconnected every 10 minutes sounds super frustrating, especially when you are trying to do online gaming and it keeps dropping.

It sounds like there could be a signal issue on the line but it is strange that the lights on the modem haven't changed when the connection drops. How long does it take for the connection to be restored? Are all of your devices connecting via Wi-Fi or do you have some Ethernet-connected devices that are doing the same thing?

To rule out a signal issue we will need to see what the signal levels to your modem look like. Please log into the modem, navigate to the STATUS ... DOCSIS WAN tab, copy the downstream and upstream tables and paste them into a post. If the signal levels are out of the specified range we may need to have a technician visit your home after troubleshooting to rule out any loose connections or unauthorized modifications to the line such as Splitters, Boosters or Attenuators.

We look forward to hearing back from you!

It started working again last night, but i checked loose cables made sure everything was tightly connected factory reset the modem left it unplugged for a few hours but every 10 minutes it kept doing it and it would take 60 seconds at least to reconnect wifi and lan.

I got the same problem since 2 weeks ago. I have change my plan to ignite 150 and a new gigabit modem (the big white one) but the problem persist. Every 15 mins or so it'll show no internet connection in windows and it comes back up again in maybe a minute or two, for both wired and wireless. And here is my log in the modem


I got the same problem since 2 weeks ago. I have change my plan to ignite 150 and a new gigabit modem (the big white one) but the problem persist. Every 15 mins or so it'll show no internet connection in windows and it comes back up again in maybe a minute or two, for both wired and wireless. And here is my log in the modem

Your upload signal is almost at the max level, also your modem isn't bonding to DOCSIS 3.1

I would call Rogers and ask the tech to run a signal check on your modem, and your neighbours. This will confirm if it's something that only affects your line, or other people on your Tap/Node/CMTS.

This has been ongoing for weeks.  Ive had drops that range from every 5 minutes to every 16 hours over the past month.  It seems worst on the weekends.  I've replaced my router, replacing my hitron CODA-4582 1a (running in bridge mode with 2.0.10.33T3 software) tomorrow as suggested by support but i doubt that's the issue.  Support says signal to the modem is perfect.

Can someone interpret these stats for me? Welcome to the Community Forums and thanks for reaching out.

I know all too well how frustrating a dropped connection can be. Did you end up replacing your modem today?  If so, we'd need to check your signal levels again.

Please keep us posted, or if you'd like us to run some diagnostics, please send a private message to @CommunityHelps.  For more information on our Private Message system, please see this page.

Just to follow up here after a technician come to my place and replacing few cable connectors. He also remove the splitter and booster in the basement since I do not have the cable tv.

After that my modem (CODA) can’t even finish provisioning, ended up replace the modem. But that ultimately fixed the issue. The downstream signal is a little high like from 5.0-7.0 but so far haven’t have one disconnect anymore for 6 days.
Message 148 of 438
973 Views
Report Content
Reply Reply
0 Likes
Highlighted

@mike_toronto2, my personal opinion is that your internet cable feed has some type of problem below 500 Mhz.  The DOCSIS frequency range on the Rogers network runs from 5 to 1002 Mhz.  The vast majority of your Downstream DOCSIS 3.0 frequencies are above 500 Mhz, with one exception.  That is due to the frequencies (channels) selected by your CMTS, which connects to the modem.  If you look at the attached chart, you can see that the vast majority of those channels above 500 Mhz are above 0 dBmV.  The singular channel below 500 Mhz is well below 0 dBmV.  Those channels should ideally be clustered around 0 dBmV. 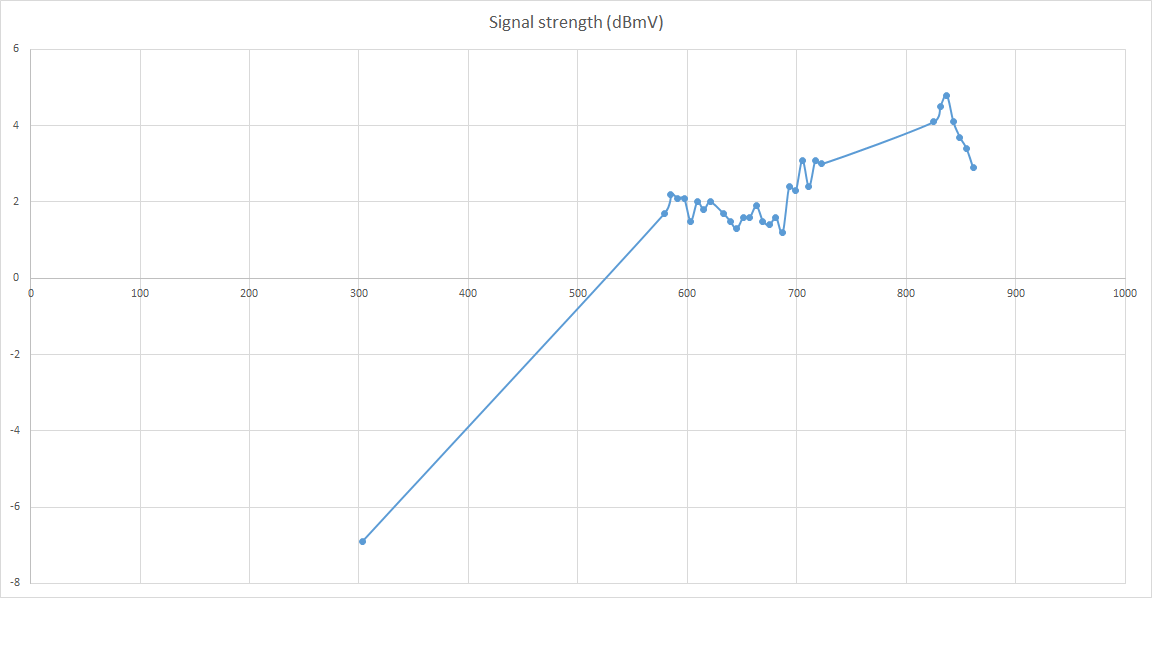 In addition to that, the OFDM channel data in your previous post indicates that the receive power level for that channel band is below 0 dBmV.  One problem at the present time is that the OFDM data isn’t correct on that display, so my guess is that the real level is below 0 dBmV,just not sure where it might be.  The OFDM channel runs somewhere above the upstream DOCSIS 3.0 frequencies and below the Downstream DOCSIS 3.0 frequencies.  So, to determine what the actual signal level is for the OFDM DOCSIS 3.1 channel, that will take a call to tech support to determine.

Lastly, the DOCSIS 3.0 upstream levels are greatly elevated above where they should be sitting around 48 dBmV.  Typically with this modem we are seeing somewhere between 30 to 32 dBmV.  The maximum upstream output levels for the any DOCSIS 3.0 modem, with three channels running is 51 dBmV.  Rogers uses 52 dBmV as the failure point.  At that point I would expect the modem to begin shutting down singular channels and running the remaining two, or one channel with higher power levels to maintain comms with the CMTS.  So, your DOCSIS 3.0 upstream levels are still within spec, not by much, but still within spec.  They shouldn’t be as high as they currently are.  Note that the upstream frequencies that your modem is using run from 23.7 to 38.6 Mhz.  Once again, they're below that 500 Mhz point that I indicated earlier.  Note that those lower frequencies used for the upstream channels are more susceptible to noise ingress from external noise sources.

All of this points to an issue below 500 Mhz of some type.  So, you will have to convey this to tech support CSR, or, the moderators will have to take this on and contact the appropriate tech staff.  Ensure that the CSR understands that you're seeing service dropouts, which should not be happening.  This requires a tech to check the external cabling and then beyond that, if there isn't a cable or connector issue, then the issue is further upstream between the modem and the CMTS.

My guess is that any dropouts are probably caused by the modem's upstream channels momentarily exceeding the 51 dBmV cutt-off and possibly dropping down to a singular upstream channel or losing all three channels as the modem can't exceed the max output levels which would actually be required to maintain comms with the CMTS at that point in time.

I have called into support three times now and no one can help me. My internet keeps dropping all day. I work from home and need a stable connection. If my area is over subscribed is there anything I can do? Or do I just need to switch to Bell as this is very frustrating as it has been ha Pending for the past 6 weeks. I have lived in this house for over 3 years with no issues and now all of a sudden my internet does not work????

Message 150 of 438
947 Views
Report Content
Reply Reply
1 Like
Where do you want to go?
Topic Stats
Recent Knowledge Base Articles
View All