Hi, I recently moved to Rogers, and am now the proud renter of a Hitron CGN3.

With my previous Bell Aliant modem, I set the uPNP setting on, had both of the xboxes on dynamically allocated IP's, and both Xboxes reported that their NAT was 'open'.

When I repeated this setup with the Hitron, both Xboxes reported a NAT type of 'moderate'. I assume that the Hitron implementation of Upnp is not top notch.

I am able to port forward to one of the xboxes, which puts that one in the 'open' state, but that doesn't do the second xbox any favours wrt xbox live connectivity.

I have attempted to setup a 'port triggering' solution, with dynamically allocated ip's, but get stuck with 2 moderate nats once more. Unfortunately I am not sure what port triggering is about, so this may not have been a valid approach.

I have called Rogers support desk, who put me through to a specialist team. The specialist team said that this was possible to set up with port forwarding to both xboxes, and for a mere $129.99 plus taxes, they would be happy to do this for me. I declined as that seems rather pricey. I didn't think it was possible to port forward the same ports to separate IP addresses, so hadn't tried this approach. Of course when I did try this approach, the router would not allow me to setup the port forward to the second xbox, due to 'overlapping ranges' (no surprises there then).

Is what I am attempting to do impossible with this router, or is there some setup that I have messed up, or not tried?

The latest Xbox "Fall Update" which was released today allows you to assign a manual port for Xbox live.

No need for UPNP anymore or multiple ports being forwarded.

I shut down all my rules for XBOX and only left port 3074 open and I had an OPEN NAT.

I remember someone needing help with multiple Xboxs on the same network and this will solve that problem. Just assign each Xbox a different port and forward those in your router pointing to the correct Xbox and everything should be fine. 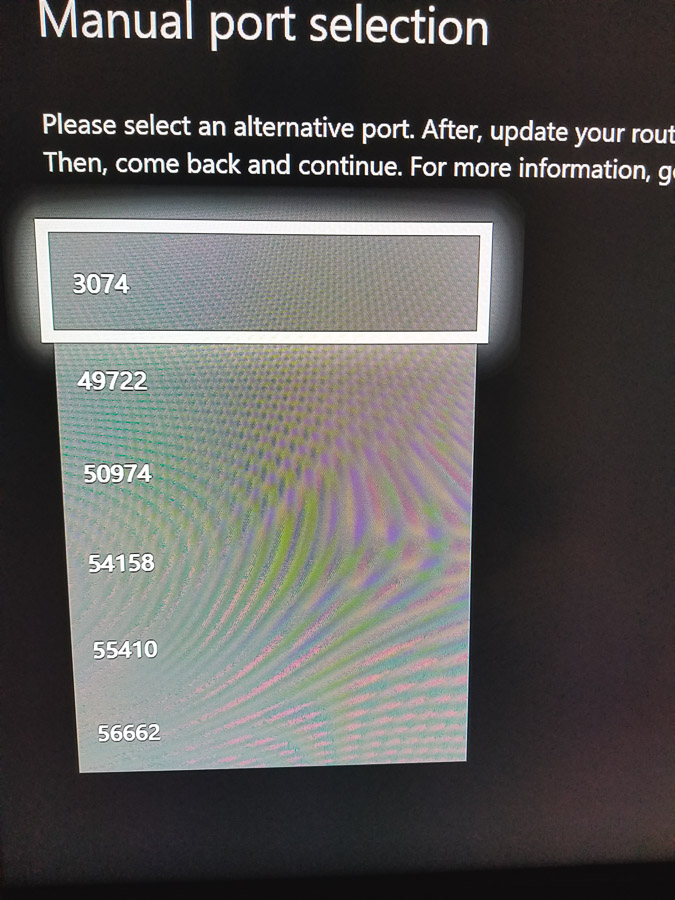 "Alternate multiplayer port selection: Under Network settings, Advanced settings there's a new button labeled Alternate port selection. For home networks where UPnP is problematic or unavailable and where multiple Xbox consoles are present, customers can now select an alternate port for multiplayer and chat to use. The default port for Xbox multiplayer and chat is UDP 3074, and when working around NAT issues you can set up either port forwarding or port triggering for this port & protocol to open up the NAT type for a single console. However, this option is only available to one console at a time if all consoles are using UDP 3074. With this new option, you can select a different UDP port from a drop down menu for each console so that you can setup port forwarding rules for each console on your home network. When the console binds to the new port, it will also attempt to port map via UPnP on this new port in case the UPnP issues with the home router are intermittent."

Switch the CGN3 to Bridge mode so that it only acts as a cable modem and use your own router, assuming that this worked ok for you in the past.

Alas I don't have my own working wireless router. My old Bell aliant modem/router had to go back when I transferred to Rogers. All I have is the CGN3.

Might have to invest in one.. but look around first, read reviews for one that DOES allow it.

Have had people here and elsewhere before, where they have the same with a 3rd party router.

One option, would be to put one of them, in the DMZ.  But it does leave it OPEN to the rest of the internet though.

I have the new Hitron CGN3 (im not sure if its a router, gateway or a modem) and I am trying to game on my Xbox One and 360. I can connect to games fine and play with friends but in order to stream and properly host games, I need an OPEN NAT (Network Address Translation). Right now I have a STRICT NAT.

I have followed the steps on the Xbox Support page ( NAT Solutions - Xbox ), but still doesnt fix the issue. I have looked on the Xbox forums and all I see are three CGN2, NOT CGN3, problems (Non NAT problems) that have no solutions. I'm hoping someone here can help me figure out how I can get an OPEN NAT on my Xbox One and Xbox 360.

The CGN3 (and many devices)  you can not change the NAT level on them..
Its possible this one, is more strict out of the box, than your one before was.

A )  Set up port forwarding..this might work. BUT many of the ports used for the 360 and xbox one are the same.. so you cant set up the forwarding to TWO addresses.

B ) Put something in the DMZ.  This is OUTSIDE the firewall altogether.  BUT, again, you can only do one device this way.

How was your setup before, prior to gettin gthe CGN3?
Were you using a modem + seperate router?  Could always put the CGN3 into bridge mode, and return to that setup, if it worked.

so i have a CGN3 router/modem, and using port forwarding for one of my xbox 360s, it works fine.  I am able to get an "open" nat connection, and no issues.  Since i have multiple xbox 360s and devices, using port forwarding is not an option for me as it only works for 1 IP address.  So i'm trying to use port triggering with no luck.  My xbox 360's still have a "moderate" nat connection.

I use dynamic IP addresses (not static), turned off port forwarding, and triggered all the ports required.  Two way status is set to YES, and trigger range and target range are the same.  Router firewall is set to MINIMUM.  I can't find the issue that seems to be wrong...

All in all.. BEST solution, is to put the unit into briged mode, and using a GOOD quality 3rd party router.

This router may have a less strict NAT.. but at min may allow port forwarding to MULTIPLE IP's (some do, some dont).

Yep.. No matter what you do. The only solution to get open nat is to set up the Rogers modem / router as a modem only and buy a really good router. I bought the Netgear 6300. WiFi on it is great and I get OPEN NAT with our 2 Xbox 360's and 2 Xbox One's.

Xbox one NAT issues with CGN3

Just wondering if a way has ever come up to fix strict NAT with the CGN3 on xbox one. No matter what I do it stays strict although at times it used to be open. DMZ used to work but now doesnt. Forwarding ports deosnt help. Is there a new router that fixes this? Have had this oen for a while now. On the 250u plan. I use the xbox wired. Is there a way to get IPv6 yet? Says im IPv4 on xbox. In Brampton  area.

Message 10 of 28
16,065 Views
Report Content
Reply Reply
0 Likes
Where do you want to go?
Topic Stats
Recent Knowledge Base Articles
View All