Thanks for the info! For the traceroute just be certain to remove the IP (and MAC address if visible) from the first 2 hops. That should do it,

It'll be important to run the ping test and the traceroute in command prompt when you're experiencing the issue so that we can use the results to verify and identify where the problem is.

Ok so I have done both the ping test as well as the traceroute.

I took this with task manager, and this is the main problem i'm dealing with. The abrupt upside-down spike nearing the right of the graph is what shows on this graph whenever there is the intermittency issue. 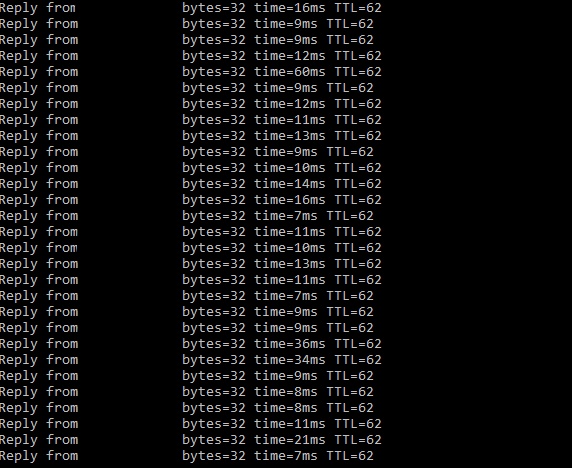 I took this at the same time as the one with the task manager, and it seems like nothing changed to pinging the second hop on the traceroute, or the neighbourhood node.

That was the final stats for the ping. There would be uncommon higher milliseconds than the normal average, but that wasn't during an intermittency.

That should be it, as it's hard to traceroute during that small frame of time during the intermittency.

Thanks so much @Redfish!

This is super helpful. I would recommend reaching out to us via PM @CommunityHelps so we can run some tests to your line. It's likely we can see this resolved for you. Sometimes minor, hard to identify intermittency problems like this can be caused by unexpected shorts in the line. We'll run what tests we can to replicate your experience and have someone dispatched to investigate.

For information on our PM system check out our Blog!

Looking forward to seeing this resolved for you!

falcios
I Plan to Stick Around

I am having the same issue.

Do you recall what hardware version the modem was at?

My modem was replaced and has the hardware version 1A. My previous one had 2A. I'm wondering if this can cause an issue?

E-SK
I Plan to Stick Around

Hi, I keep having to reboot my CGN3ACMSR 2-3 times everyday, especially at night times, experiencing speed drops or brief disconnects. I usually can tell while watching TV via IPTV box that's connected via CAT5
Software version: 4.5.8.40TE
I wanted to attach the D/U signal parameters in this post, but I couldn't figure out how - could you please help me to attach them?
Your insight is kindly appreciated.

@E-SK log into your modem and navigate to the STATUS .... DOCSIS WAN tab.  Starting at the Downstream Overview line, copy the entire table that sits under that line, all the way down to the bottom right hand corner of the table.  That will include the downstream and upstream data.  With that area selected, right click .... Copy.  Then in a new post, right click .... Paste.  That should paste in the entire table as it appears in the modems user interface.

Message 16 of 16
105 Views
Report Content
Reply Reply
1 Like
Where do you want to go?
Topic Stats
Recent Knowledge Base Articles
View All