I have been having intermittency that got increasingly worse for around a year now. After multiple calls to Rogers and having technicians come over to try and diagnose the issue, they weren't able to find the reason. However, about a week ago, after relocating my modem, I realized that rebooting it stopped the intermittency completely for a day, and then the next day it would be the same. I came across another forum which explained another person's situation which seemed identical to mine, but worse, and the issue was a "plant issue". Is there anyway to see if this issue applies to me, as well as how I would go about explaining it? Or if not, another solution if someone had this same problem?

@Redfish when you say that you relocated the modem is that to mean that it was relocated and connected to another wallplate cable outlet, possibly in another room?  If that's the case then it would indicate that the original cable port and its entire cable path, running from the basement splitter connector, up through the cable and its connectors and finally through the cable outlet, has some type of issue.  There could be problems with either the cable itself or any of the connectors along the way.  The cable should preferably be RG-6 cable.  Its possible that the cable itself has some problem, which could be signal loss if the cable is old RG-59 cable, to something like a nail thru the cable to a splitter or connector buried in a wall somewhere.  If there is any way to inspect that cable, you might see something obviously wrong with it.  If its exposed in your basement prior to rising up to the wallplate, you might be able to identify the problem.

Its usual to see some oxidization of the exposed centre copper conductor at the connector.  That's why techs will usually cut the old connector off and install a new one, where the exposed copper conductor is clean.  That oxidation, over time could cause signal loss issues.  That copper conductor should also be free of any of the external aluminum shield threads.  If the connector wasn't installed properly at either end, you might see some of that aluminum shield contacting the center conductor, which would ground out that conductor and cause problem.  With both ends of the cable disconnected, you can clean off that center conductor with a sharp knife or sandpaper.  Remove any oxidation so that the conductor is clean.

The F-81 connector that runs thru the wallplate might need replacement for a higher frequency connector.  Lowes  and Home Depot have F-81 connectors which are good for 2.4 Ghz.  Presently Rogers uses a 5 Mhz to 1 Ghz band for internet and cable tv frequencies.  At some point, hopefully not too far down the road, that will change from 5 Mhz to 1.2 Ghz for DOCSIS 3.1 operation.  Typically older homes have F-81 connectors which have been in place for a number of years (forever) and which are suitable for frequencies up to about 750 Mhz or so which are good for external antenna.  If you're looking to improve the cable performance, however slight, this is one area that can be considered at some point.  Its not critical at this point as the white CODA-4582 modems are running upstream and downstream frequencies below 500 Mhz.  That will change when Rogers enables the higher frequencies for DOCSIS 3.1 ops.  Here's an example of the higher frequency F-81 connectors:

In line with that change for DOCSIS 3.1 ops, there are new splitters that Rogers is now installing which run from 5 Mhz to 1218 Mhz.  These are the red faced splitters as shown on the following link.  Ignore any splitter that doesn't have a red face on it:

Another item that comes to mind is the cable path that the original cable port takes.  If that happens to run by any heavy duty electrical equipment, such as a motor for example, its possible that you're getting Electromagnetic Interference induced into the cable.  The cable shield is supposed to protect the inner conductor, but, if the EMI source is strong enough, it possible that the cable signal levels are being affected by that EMI.  That brings about discussions on grounding which is done thru a cable ground block.  That ground block is usually located external to the home, inside the closed cable box that marks the demarcation point between the external cable and the internal cable system.  It should protect the cable from large external electrical sources, including lightning strikes, but, as I indicated, its possible that a cable could suffer from EMI if it was located close enough to an EMI source.

If you use a power bar to power all of your equipment, consider the possibility of a failing metal-oxide varistor, which is used in power bars to protect the connected equipment from over-voltage incidents.  They will last for a number of years, but, when they start to fail they will emit EMI which can penetrate RG-6 cable and power cables and cause problems.  Usually they're the last thing that anyone considers.  Its typical for tech support service reps to ask customers to run their equipment without a power bar and the possibility of a failing varistor is why that is requested.  That requires that the power bar be completely disconnected, from the wall socket and from any connected equipment, to remove it from the system entirely for test purposes.

Ok, hope this helps.  With some investigation you might be able to determine why the original cable path causes problems.  The worst case scenario is a failing splitter or connector buried within a wall somewhere.  That would require you to fish a new cable thru to the wallplate, or, simply abandon that cable port on the wallplate.

If you happen to have structured wiring installed, you might have another cable available at that wallplate.  That structured cabling is usually composed of two RG-6 cables, one Cat 5e ethernet cable and one Cat 3 telephone cable.  There are variations of this, but, usually there are 4 cables within that bundle, which runs from the structured wiring panel downstairs to the electrical box behind the wallplate.  Its up to the home owner to remove the wallplate and check for any other cabling that could be put to use, including a secondary RG-6 cable that could be used to run the modem.  Its rare for an RG-6 or RG-59 cable to go bad, but, its possible if the cable was bent too far during the installation within the wall, or if a nail or drywall screw was inadvertently run thru the cable.

Redfish
I'm Here A Lot
In response to Datalink
Options

Thanks a lot for this quick and helpful reply, I should have given more information on my network setup. I currently live in an older home, so i'm sure that must for something with the intermitency. The main cable from outside comes into our house, to the basement, where it is split 3 ways, between the modem, the TV, and phone line directly. One of the technicians which came, tried a different splitter, where the issue still persisted, and so he told me to buy another coaxial cable and test that out. The one I bought was:

It's an RG6 cable which now goes from the splitter straight to the modem. So with this cable, the problem was still occurring, and so we have used the line to place it on the main floor, so there is the cable leading from the basement stairs to the main floor. From there now there is another ethernet cable which leads down to the basement where 3 computers are hardlined straight to it. This intermittency happens between all 3. We have had our connectors all cut and replaced by the technician, and replaced the modem twice.

Ok, so, this is looking more like an external cable and/or connector issue.  When you have time, can you log into the modem and:

1.  Check the Software (Firmware) version that you have loaded.  That shows up on the STATUS page when you log into the modem.   I'm assuming here that you have either the black Hitron CGN3xxxx modem or the white Hitron CODA-4582.  Please let me know what firmware version you have loaded.

That table will copy and paste, just like any other table in a document.

That splitter will have three ports on it, one marked 3.5 dB and two marked 7 dB.  Those are the signal drops thru those ports.  The modem should be on the 3.5 dB port.  Can you have a look just to see where the modem cable is connect to, and let me know which port it happens to be, the -3.5 or -7 dB port.

Does the external cable arrive overhead from a utility pole, or underground?   Not that it makes a huge difference, the cables eventually fail after several years of use.  When you get to a point where you need to reboot or restart the modem to get it back online, that's a typical sign of a failing cable and/or connectors.

One other issue could be a poor cable ground.  There should be an external cable box that marks the demarcation point between the external cable and the internal house cable system.  That box normally contains a cable ground block, which looks something like this: 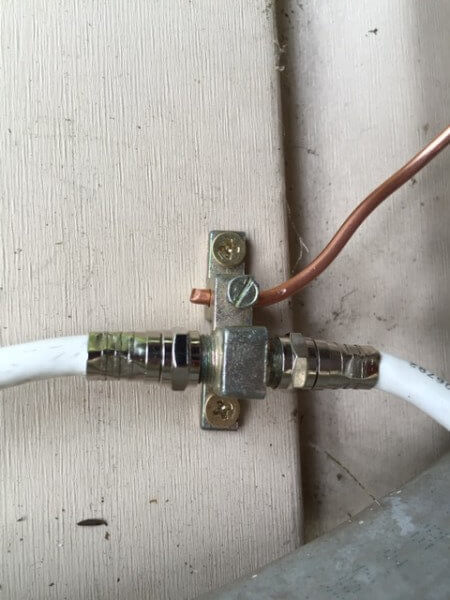 That comes from the following page which outlines grounding an external antenna, but, the same principals apply:

First step is to look at the firmware version and signal data, next step will be to start running ping tests to the Cable Modem Termination System, which I will explain if required.  One step at a time, as they say ......

Edit:  would you happen to know when your external cable was replaced?

Redfish
I'm Here A Lot
In response to Datalink
Options

The cable arrives overhead from the untility pole, straight into a grey box outside my house.