A couple weeks ago at work we downgraded our 100/10 connection to 30/5, due to Bell FTTH 250/250 being installed as the primary connection. Rogers 30/5 is now the backup for automatic failover.

However, since the downgrade, i only get 4meg upload, like really on the dot 4.00. Multiple speed tests, tests uploadting to FTP's all reveal the same issue. getting 30meg down no problem. Spoke to Rogers a week ago, they upgraded the firmware on the CGN3ACSMR, had me do all kinds of stuff, nothing would produce higher speed than 4.00meg upload. I tried in gateway mode, I tried in bridge mode, i even tried wifi on my iPhone.

I called Rogers again today to see if they had an update on the ticket, they said it wa marked as no issue found. I tried to get them to give me an answer, how come in the 12 years we've had cable at this office, with the countless different packages over the years, the speed was always as advertised, download & upload? And the fact that the last two packages we had were 60/10 and 100/10, both were able to easily attain 10meg upload at any time of day.

I was told if I'm getting between 3-5meg up then its acceptable to Rogers and I should basically go fly a kite. I didn't give up so she passed me to some other guy, not sure if it was a 2nd level, but he was even more rude telling me that i'm never gonna get full 5 meg upload... I was like are you freaking kidding me, i didn't fall off a turnip truck so don't feed me this ... I basically told him forget it since I was this close to losing my temper...

To me this sounds like there's some kind of provisioning error, the profile is wrong and just not going over 4meg up. If anyone here has 30/5 Business package, can you run a couple speed tests? Residential is different, because they overprovision and speedboost it, something that has never worked on Business tiers in this area.

Any help from a Rogers rep would also be appreciated. I can provide account info via PM if required. 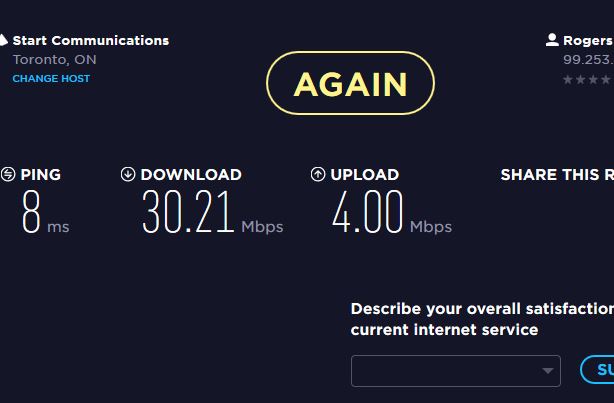 The case you mentioned above, is it still pending? If you'd like we can escalate the request for you. You mentioned that you previously had 60/10 and 100/10, were those business packages too? We can have a tech sent out to check the service for you. Please contact us via PM @CommunityHelps for further assisstance.

@Datalink can you please offer your insight as well.

The ticket was closed they told me, no fault found... I don't need a tech sent, the signal levels are fine, the modem is fine. Same modem was used on 100/10 business just until a couple weeks ago, and was able to get full download & upload speeds. Both 60/10 and 100/10 we had prior were business packages, as were all other packages since 2005.

What I'd like if someone could perhaps check if the 30/5 profile applied to my modem has the correct upload speed... The CSR on the phone could not verify that because they dont have that information, all they said is "You're on the correct 30/5 package in the system", they couldn't see the actual bitrate.

It probably requires someone with a bit more higher access.

Did you try other speedtest websites - for example:

If you still get 4.00 on all websites, it's possible that your modem is incorrectly provisioned and you need to ask for "second level" to have that fixed.  As a business, that should be fairly easy.

I also pay for 30/5 and over the past year my tests have always been slightly above 30 and around 5. I just tested now and got 33/4.5 on one site and 37/4.5 on another.  I rarely do much uploading, so this doesn't bother me, but if it persists or gets lower, I may look into it.  My download speeds are always above what I pay for, maxing out at around 100 mbps for the first few seconds due to Speed Boost.

Hi, just a reminder that bandwidth is shared. I'm sure you have done so but if not, make sure that your wired computer is the only thing connected when running speed tests for accurate results. Disable wifi and all other wired devices, then test again. We can run a reconfig on your connection to push the configuration file back to your modem. If they cannot see the bitrates that your modem is provisioned with in our tool, then there may be an issue on your connection. Thanks for your patience while this gets resolved.

Yes I know bandwidth is shared among all computers/devices, but as I mentioned, this connection is now a backup, so there's nothing using it, especially when I was testing it I had it connected directly into one computer, via gateway mode and also bridge mode.

Who can I PM the modem/account information so you guys can try to reprovision the modem?

Here's an interesting tidbit, I was also discussing this on DSLReports, and a TPIA user (start.ca) has mentioned that he's on a 30/5 residential connection via Rogers, and since September he also cannot get anywhere close to 5meg upload. Here's his speedtest.

This further points to something being wrong with 30/5 profiles for Business/TPIA customers.

Is it only via FTP that you're not getting full throughput or do you not get full speeds when you do a speed test as well?

If it's consistent across all tests, I would recommend calling in or chatting with our business tech support team for further support.

Not getting full upload thru any method. Web upload, FTP upload, web speedtests, etc. It's capped at 4meg.

I already called tech support twice on this issue, and was told everything is fine if I get between 3-5meg. I do not find this acceptable, hence I'm asking here maybe someone here can find the right person to take a look at the profile settings for 30/5.

Message 10 of 13
1,467 Views
Report Content
Reply Reply
0 Likes
Where do you want to go?
Topic Stats
Recent Knowledge Base Articles
View All