On December 15, 2015, I let everyone know that we had started to roll out the updated Navigatr guide.  Take a look here for that post.

As we continue to roll out the update, customers will be notified ahead of time that they will be getting the new software.

If you have received the updated Navigatr software (i.e. since December 15, 2015) and would like to ask a question and/or share your findings/learnings, please do so in THIS THREAD.

As always, the Community Guidelines and Terms of Use apply.

Thanks very much for keeping the community a pleasant place to be!

headhoncho
I Plan to Stick Around
Options

I'm not sure if this is a bug or a "feature" (or maybe I'm just not doing it correctly) but when I press "guide" I want to see all of my subscribed channels, and when I press "fav" I only want to see my favourite channels

so I just pressed "guide" and all that was there was my favourites - so I changed the filter so it listed all subscribed channels.

then I clicked "fav" and saw my favourites

can this not be done  now?

OLDYELLR
I'm a Senior Advisor
In response to Gdkitty
Options

So let's get this straight. I welcome change when it makes an interface quicker, easier, more intuitive, and more powerful. How many of those attributes does Navigatr have?

And when I look at my stupid tiles (can we switch back to a LIST?) of recordings I have to select it to get information about the recorded show. What is I have five different Tonight Shows and I want to watch the one that has a certain actor as a guest - I have to check EVERY single tile to get info on the show.... At least with the old version I could SEE the show's info as I scanned the LIST - didn't have to press no other buttons....


I'm not sure if this is a bug or a "feature" (or maybe I'm just not doing it correctly) but when I press "guide" I want to see all of my subscribed channels, and when I press "fav" I only want to see my favourite channels

so I just pressed "guide" and all that was there was my favourites - so I changed the filter so it listed all subscribed channels.

then I clicked "fav" and saw my favourites

can this not be done  now?

Yeah.. something has changed.. and i think what you are experiencing is a bug.

Lets say off a fresh turn on, etc..  you press fav, it should show the favorites.

But if you press guide right away, it carries over the FAV to there as well.

I beleive i remember reading.. i dont remember if here or elsewere.. if you EXIT the fav.. then go into the guide.. it should come up ok.

JEL
I Plan to Stick Around
In response to OLDYELLR
Options

My feelings exactly.  Every other software of any kind I've ever had, when a new version came out, the vendor explained how it was better, easier to use, more functional, faster, annoyances and bugs fixed, etc.  Rogers did none of this, just stuck it onto my machine without my consent.  Many people have found issues.  The one or two who seem to like it dismiss any and all concerns, saying simply that it works fine and anyone who disagrees has only themselves to blame.  I think customers deserve better, i.e., how is it "quicker, easier, more intuitive, and more powerful"?  Is that too much to ask?

scuddycat
I Plan to Stick Around
In response to Annex
Options

After getting the new and improved (not) Navigatr and finding many of the bugs and frustrations others have talked about, I called Rogers.  While many of the issues are lack of ease of use and functionality from the past incarnation, one bug I was experiencing is my settings screen is blank so I'm unable to make any changes there.  That had me calling tech support that asked me to reboot my box (again) and of course that didn't fix anything.  It was suggested that my box was faulty and to exchange it for a different one.  I refused as that meant I'd lose all of my recordings.  So a ticket was opened that I'm sure is a duplicate of a bunch of other tickets that contain the same complaint, but I digress.

I asked to speak to a manager.  I was fed up with the stock answer when a reboot doesn't fix a problem, that the box is broken so take it in and exchange it.  I'm also fed up with Rogers subjecting us to this  despite the obvious dissatisfaction with the Navigatr.  I spoke to someone from "Rogers Management Office".  He was a sympathetic ear, but said all he could do was pass along my concerns.

I asked things along the lines of:

1) Does Rogers read its own forums?  And pointed out there is an article in this thread that lists over 40 concerns.    Why doesn't someone from Rogers address these?  Acknowledge that they exist and what they are doing about them.

2) Why does Rogers continue to push out this product when so many people are unhappy with the loss of use and functionality?

3) Why doesn't Rogers let its customers revert back to the old Navigator while they iron the bugs out?

4) Why doesn't Rogers consult with interested customers to determine where to put their development efforts:  what to fix and what changes would be good.

He did say that they were aware of some issues and they are "working on them", but I pointed out the lack of feedback from Rogers on forums such as these has the appearance that Rogers doesn't care about its customers.  I'm told I can post something on Rogers.com that will go to the Office of the President and that I'll get a call back within 48 hours.  I plan to say all of these things there.

I encourange readers that are a frustrated as I am to do likewise:  talk to someone in Rogers Management Office (you have to call customer service, speak to a tech support person and ask to speak to someone there) and write a note to the Office of the President via Rogers.com.

I'm still optimistic that Rogers might so the right thing.  Though by the time they do, I may not still be a Rogers customer.  I can't take too much more of this torture!

ecar
I Plan to Stick Around
In response to 57
Options

Moral of the story.....try a know good signal outlet.  I didnt expect this solution to work but it surprised me.

Thanks to all who replied.

Upgrade to the new NextBox Navigatr took place over night and everything is working well. Took about 4 minutes to get used to all the different ways to navigate. I'm one of those geeks so don't have any problems with the upgrade.

Square
I'm a Reliable Contributor
In response to Quiet-Rose
Options

Well we got Navigatr here in Waterloo Region today.   Rogers Darrell post didn't mention Waterloo Region, just Ottawa and London, what's up with that?    Anyway, my question is :  Is the Navigatr just for PVR'S?, cause my Nextbox 4642 did not receive it.

lstewaN618
I've Been Here Awhile
In response to b1cgmg81
Options

How do I get a lising of programs I've scheduled

How do you get a list of the shows you have flagged for recording. For example, after I've selected the channel, show and time then chose a single or series recording to the PVR, I want to be able to press List once (or twice - whatever is required) and visually determine that the recordings I want are IN FACT scheduled.

I'm in London and we just got the Navigatr update today.

One issue that we have and I haven't seen any discussion on is on the limited sorting abilities on the PVR esoecially when you have multiple PVRs hooked up together. The old PVR guide would let us sort by PVR (we have 4) and now we can't. It doesn't even indicate which PVR a show is recorded on.

I really don't see what features the new Navigatr guide has added that weren't there before and in fact it has removed features that I found very useful such as the sorting by PVR feature.

Please bring back all of the features of the old guide, I don't care if you dress them up differently or if you add new ones but for those of us who use more than one PVR you have made things more difficult!

SavvyChimp
I Plan to Stick Around
Options

Same for me but I just rebooted my 4642 and he got the update so try that .
1 Like
Share
Reply

b1cgmg81
I've Been Here Awhile
In response to SavvyChimp
Options

This is the worst "upgrade" ever . Why the huge tiles for recorded shows? And where are my scheduled recordings ROGERS you messed this up big time. PLEASE GIVE ANYONE WHO ASKS TO REVERT TO OLD SYSTEM. I'm looking into Fibe !

User guide is a total fail. Should have implemented a toggle for Tile/List modes.

Baffles me how Rogers can spend $7billion for the NHL licenses but they can't spend $5k for a decent UI designer. 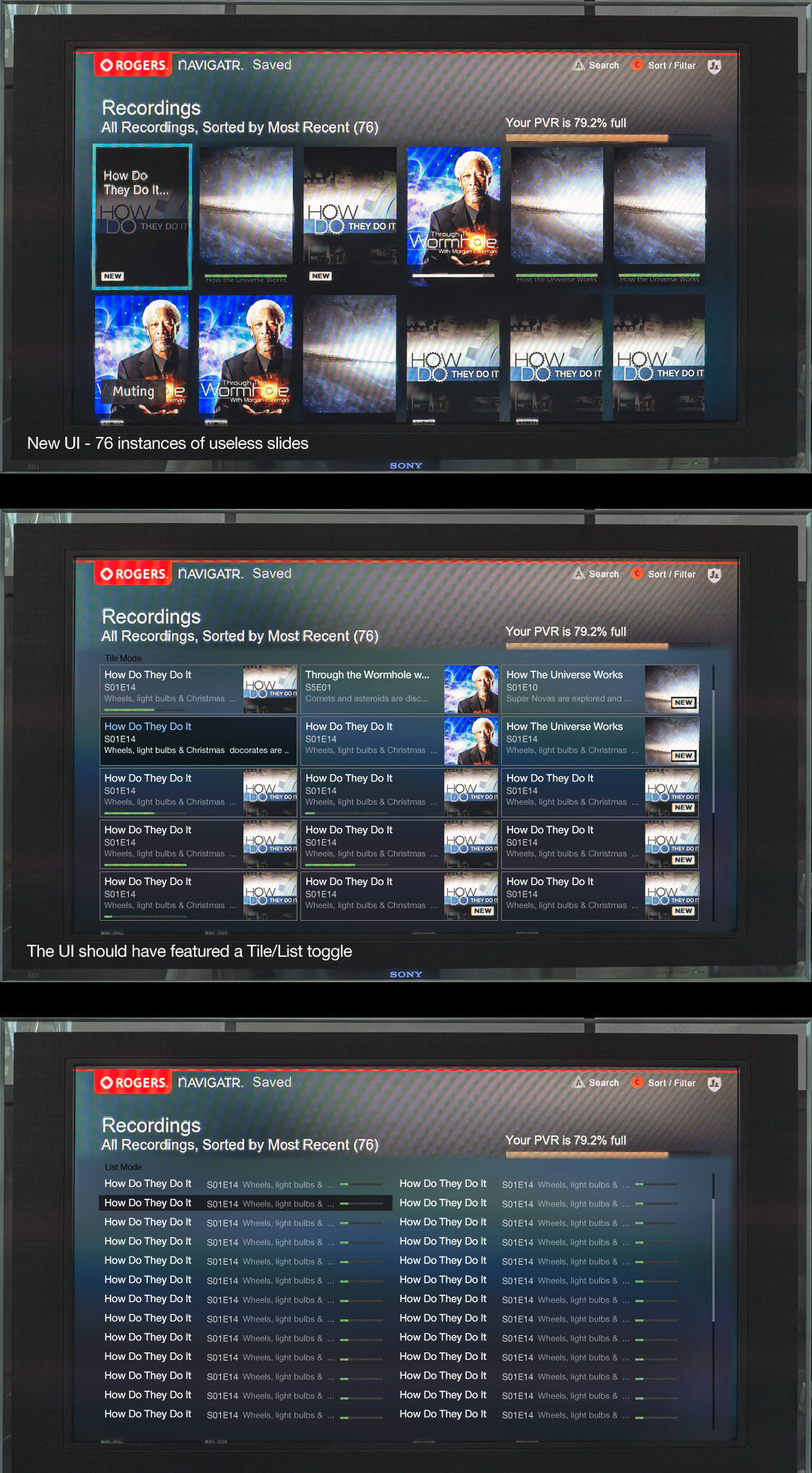 cgraves0
I'm Here A Lot
In response to Square
Options

scuddycat
I Plan to Stick Around
In response to MarkDarren
Options

How did you get lists like those shown on your second and third pictures, or were those screens you mocked up that you'd like to see?

scuddycat
I Plan to Stick Around
Options

Does anyone have a resolution/workaround for how to see the settings for those of us that see a blank screen when we press MENU and select Settings?

Does anyone have a resolution/workaround for how to see the settings for those of us that see a blank screen when we press MENU and select Settings?

See the following link where I already answered that question:  I hope it works for you. If not do a reboot and try again.

Square
I'm a Reliable Contributor
In response to SavvyChimp
Options

@SavvyChimp wrote:
Same for me but I just rebooted my 4642 and he got the update so try that .

Thank you.   Reboot made it work.

So, who do we complain to? Calling customer service is probably pointless. I'm going to anyway, but I feel like I'll probably get a canned response, and nobody who's making decisions will ever hear my complaint. I am really unhappy with my Rogers service now due to this upgrade. I am not complaining because it's new, because I love new stuff. But you should not lose all of this functionality and have bugs when new software comes along. I also feel like the software should be optional. My box is my box, just like my phone is my phone.