jhiggins
I Plan to Stick Around

I've had one tech come out in the afternoon (when things are usually fine) and he said he saw no issue what so ever other than my signal strength being TOO strong. And it's pretty hard to get a tech out at this time of night when the issue is happening and when my family is home from work to actually use the internet.

If you've had a couple of tech visits already, and previous tickets on the go, then the next step is to send a pm to @CommunityHelps which is the group address for the mods.  They can escalate the issue to the senior tech staff and hopefully get the ball rolling to sort this out.  Its possible that the maintenance staff might need to become involved, so, this might not be a quick fix.  But first, contact the mods thru the address above and go from there.  Patience and persistence I think are the key works, especially persistence.

Packet Loss During the Evening in Downtown Ottawa

I have been dealing with this issue for about a year now I'm hoping someone here can help out. I have made so many calls to Rogers and have technicians out to my place more times then I can count. The story is pretty much the same for every ticket that I open. They verify that I am indeed experiencing packet loss and usually check my neighbors and claim they are experiencing this issue too - The ticket is escelated and closed shortly there after without ever really solving the problem. I've had numerous technician visists to my house and they even replaced the line coming into my building yet every night its the same thing... packet loss. 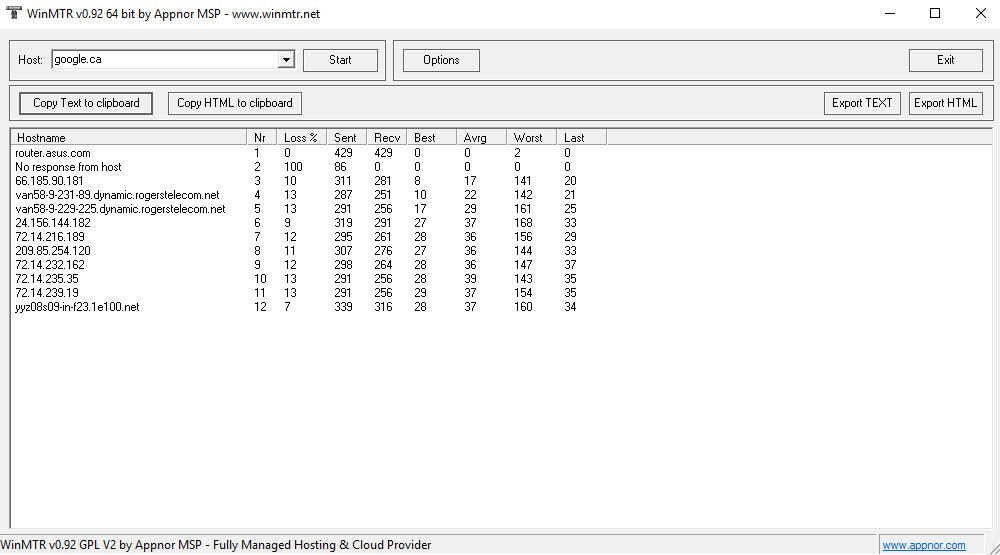 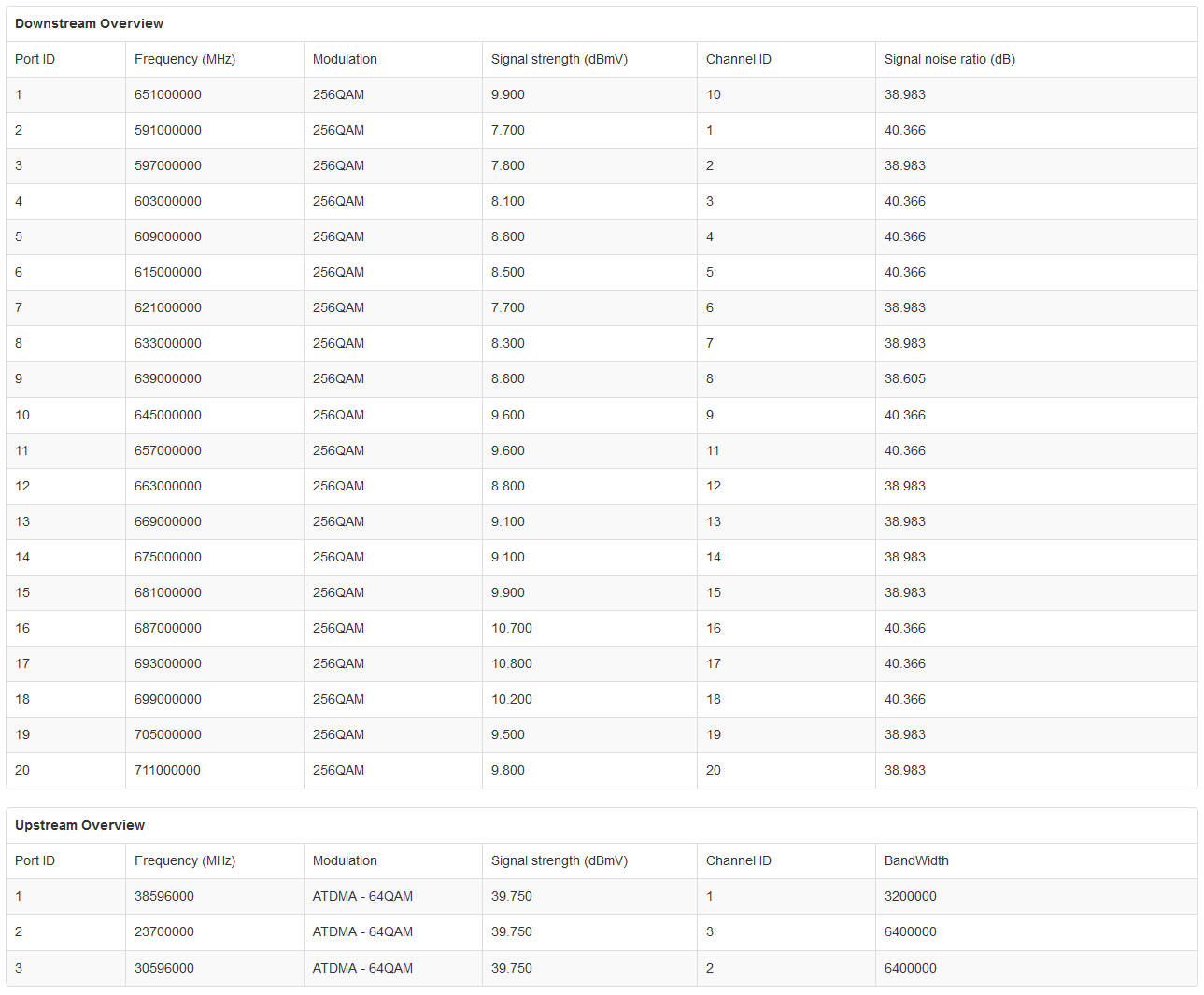 Just a quick update here is a couple back to back results from speetests on a 300MB/s connection...

I'm surprised that @RogersMoin didn't respond to your post.  Your downstream signal levels are too high. That also surprises me given your indication of numerous tech visits.  First thing that needs to happen is drop the signal levels.  Next is to figure out the area issue.  Your next step is to send a pm to @CommunityHelps so that the mods can start yet another escalation, and hopefully get the right staff involved to resolve the issue.  Follow the @CommunityHelps link and use the link on the right hand side to "send this user a private message".  One of the on duty mods should get back to you later tonight.

For an area issue, my guess is that the maintenance staff will have to become involved.  Are you in an apartment, or in a house, as that does make a difference in what modem connects to and the signal levels that could result.  I drive through the downtown area every once in a while, so I'm slightly familiar with that area.  Given the overall age of the downtown area, I would think that the neighborhood cabling has been around for a while, so that itself could be a major part of the problem.

You should be calling in everyday that you see packet losses.  Same for your neighbors.  The more calls that go in, the faster this will be resolved.  Be patient (yup, I understand thats tough) but persistent.  Ensure that your complaints are recorded on file.

I recieved a call from Rogers today and they verified that they believe the problem is on thier end. They said the problem was to do with network infrastructure and there was such a high percentage of noise in the neighborhood it was causing a loss of data.

The last technician who was here (2 days ago) claimed that the other tech use a wrong attenuator and replaced the one he had installed with this current one to fix signal issues.

I'm in a townhouse, so I assume its similar to a small apartment building?

I've probably made somewhere in the ballpark of 50 phone calls to Rogers about this issue but I will increase the frequency of my phone calls on your advice if this latest attempt does not fix problem.

Thanks for the timely response. I didnt expect one so soon!

If there is an attenuator in place, it needs to drop the signal levels more than what it does at the current time.  That's one issue that requires attention as well.

Try OpenDNS or Google's DNS 8.8.8.8 and 8.8.4.4 as your DNS servers and see what difference it makes to your routing.  It may not solve the packet loss issue, but maybe it will shorten the path to the end servers.  There have been complaints in the past about the performance of Rogers DNS, so, just for test purposes, try one of the others.

I did write down the ticket number - it has been open for well over a month now. I have another tech visit scheduled for tomorrow to hopefully fix signal issues for good.

On your advice I tried both OpenDNS and Google's DNS options vs Rogers. There wasn't anything significant to note about fixing the packet loss it stayed roughly 15% across all attempts. However, packet response time was significantly reduced. Average response times of a "ping google -t" for Rogers DNS was 33ms and OpenDNS achieved 13ms, google tailed closely with 15ms. I have yet to do more real world testing but inital results are very good for response time.

Here are results of a simultaneously running WinMTR with the different DNS settings: 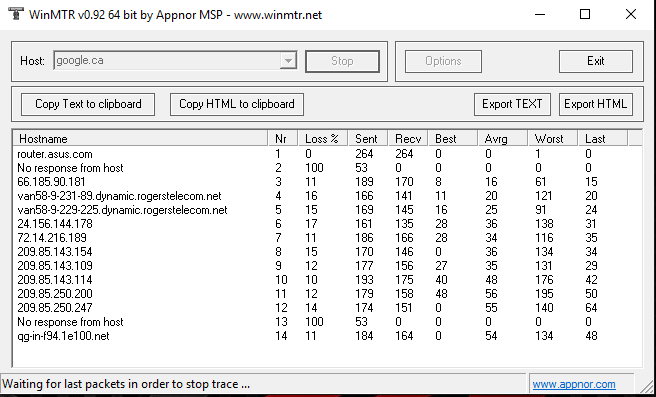 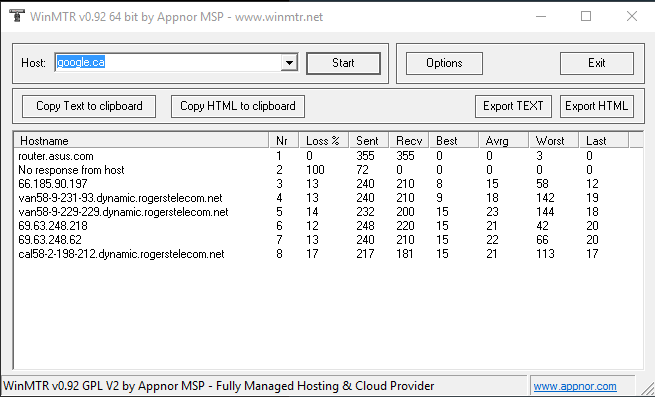 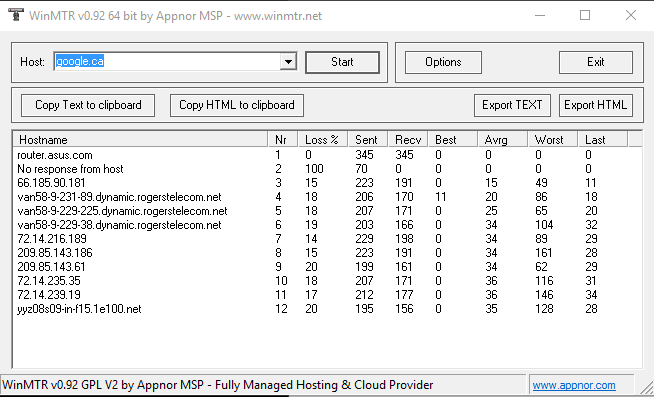 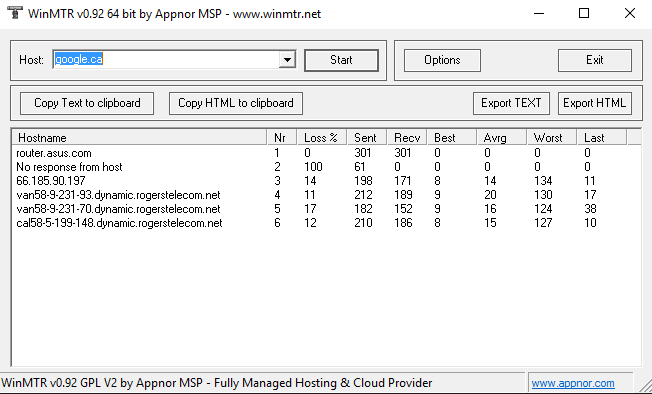 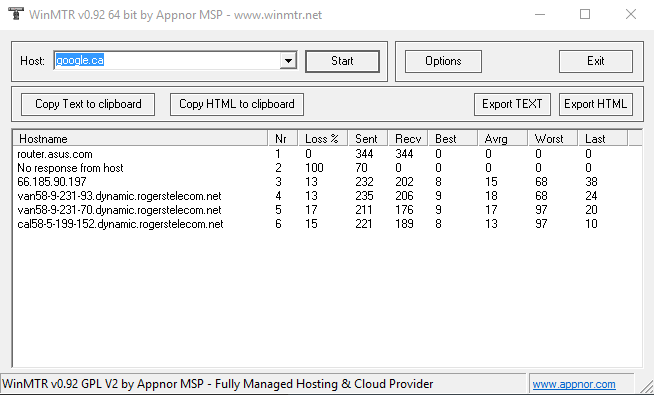 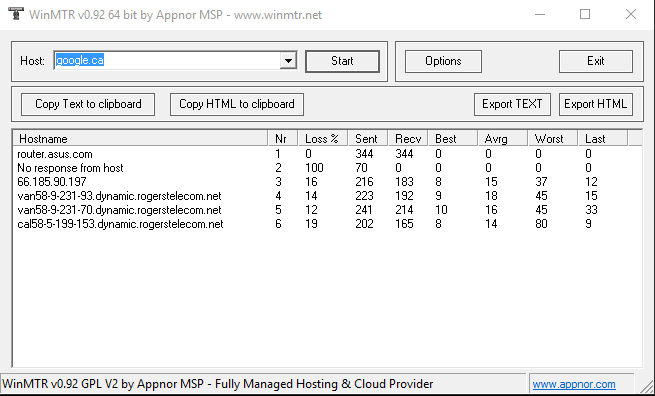 organotin
I've Been Around

Hi all, I've been having this issue since the beginning of February. Hopfully someone can diagnose this issue. I'm authorized to return the modem, but I want some answers first.

ISSUE: Some websites will not load, or load very slowly. The websites affected are very random. The entire household (about 10 computers, 1 is on ethernet) experience the same issue.

(1) YouTube videos -  Some will load instantly, others will take up to 3 minutes (and longer) to load.

(2) Rogers.com - a prominent one that works when it wants to. On Google Chrome, I'll get the error "ERR_CONNECTION_TIMED_OUT" if the site doesn't load. It will never load until I reset the modem.

Router: Confirmed to be functional. Loaned out to a neighbour to use for a week, and they did not have the issues I have. Also, I've tried updating the firmware, using custom firmware, and setting everything as default as I could.

Modem: Functional (?). Used the CGN3AC in Residential mode all week, and no issues experienced.   Cable signal strength is on average @ ~ -5.00. Will get specific numbers on request. Can't access modem in bridge mode anyway. I've tried switching around the wires, and trying different LAN ports on the CGN3AC.

I haven't been able to get another router in yet. I'm 100% There's an issue somewhere between the modem (in bridge mode) and the third-party router.

EDIT: Gaming and Netflix services work flawlessly. Seems to be an issue with the web service.

Thanks for your time!

To update: For me the packet loss issue has been solved. It took quite a few visits and a lot of phone calls but I feel that I can safely say the problem has been rectified. I've held off on posting this until I was absolutely sure but for the past two months I havent experienced any packet loss. Rogers apparently had to go through my neighborhood piece by piece until they found the problem and thankfully they did. I have no idea what the problem was that they had found but I was told the methodology they were going to use before hand.