Slow Connection Speeds after upgrading to Rogers EXTREME PLUS

would it be better to disable the wireless on my smc modem? and use my own router, this is my second modem already and seems to me the speed drops alot. and third ticket, service came to my home already everything ok whats with these modems why are there alot of people having the same issue as me. is it the firm ware, hardware thats messed up with these smc modems? i never had any problems before with my motorola modem before but wanted more speed but its **bleep**, i have extream speed and at time i get 7, or 8 downloadds can i still use my motorola modem with extream and see if my speed drops ?

@lethalsniper I would call Rogers tech support and ask them to change your modem into bridge mode. This should change it to act like a modem only then you can use your existing router. Not sure if it will help your speed but at least it will be setup in a way you are used to and have more control over.
Message 12 of 23
2,812 Views
Report Content
Reply
0 Likes
Highlighted

skutflut
I Plan to Stick Around

I understand your frustration with Rogers.  Remember however, that what Bell states,  and what they deliver may be no better than what you are getting now.   You might want to visit  www.dslreports.com  and browse thru the Bell forums to get a feel for what sort of service quality,  and customer complaints are with that provider.

There is also a Rogers forum there,  Take a boo at that while you're there.

I am NOT a Rogers employee.  I am a long term customer, and one of those not happy with Rogers' refusal to supply a docsis3 standard modem,  without  the router/gateway/headache combo.

i all ready called this is my third ticket since i went from express to extream with the smc modem and its my second modem already and same issues, tech all ready came to my home and said everything is good, can it be the modem SMC is it the firmware or hardware problems, i never had any problems with the motorola my speeds would never drop and i woulnd never get any lag at all playing xbox live.

Thanks for your patience.

Can you please send your full name, phone number where you can be reached, along with your issue to forumsupport@rci.rogers.com in order to escalate your ticket?

I have also sent you an email documenting my issues.

Thanks for all your information everyone!

Please note that the issue you are experiencing is a non-supported issue on Rogers end.

You should refer back to the manufacture of the game console for proper setup.

This may be of some help, below you will find the port information that is required to setup on SMC to resolve Xbox Live issue. 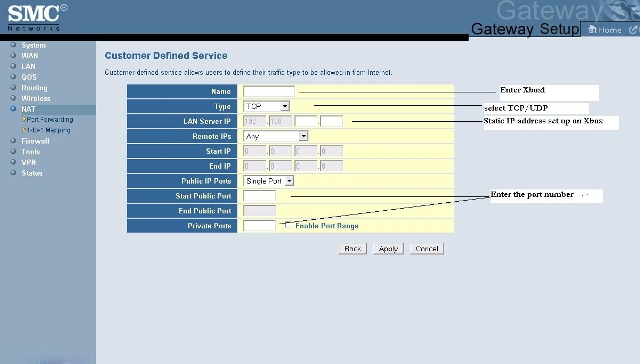 Ok just had a senior tech guy come by my home and found out that he noticed flapping, he said to me thats why i,m getting slow speeds and he needs to get the rogers maintenace guy to fix the problem out side near my area? what does flapping mean?  he also said that i,m not the only one thats been having this issue in my area, Donmils and sheppard. I got the SMC MODEM the newest one, i still think its the modem thats not good for my area just have to wait and see.

Flapping is when your port enables and then disables repeatedly.  The back of your cable line runs to a Rogers box somewhere on your steet or building and that connection is what is probably going to be referred to as the "port" on Roger's side with your side being the back of your SMC modem.  In real networking terms the port is where the ethernet cable or fiber plugs into the switch or router.  Same thing, different type of connection.  He may be right but speaking in that terminology to someone who doesn't have a background in networking is just plain stupid, he should have told you in "english".  Just so you know, there are other thigns that can cause this such as bad weather if any part of your cable run is exposed, including heavy wind.   AND the other major thing that roger's is not discussing is the DPI (Deep Packet Inspection) they are using as part of their recent traffic shaping initiatives.  In order to curb people abusing the bandwidth, espcially with P2P and Utorrent etc... Rogers is caching (temporarily storing and inspecting) some of the data packets sent from your computer on their network.  It does this at random intervals and checks the header of the data packet to see what type it is.

**In laments terms - It's like, if a pill was a data packet (the old style pills that you could open) and you opened the pill to look at the small coloured medicine.  By checking to see what colour they were you could know what the pill was that you were about to send down your throat, without ever having seen the box it came in or in this case the progam on your computer that was sending it.     Bell does this too so Roger's isn't the only one.  The issue is though, that Rogers doesn't seem to be using very efficient network applicances or algorithms to check this and it's slowing down a lot of people.  I work in this industry and have verified this to be the case.  If you encrypt your data using somethign called VPN or SSL (you can lookup on Google) such as when you visit any https websites, Rogers can't read that data.  It's a secure connection from that website to your computer so people in between can't steal your credit card info.   At that point you should default back to your regular speed but that's not happening.  I have verified this too with VPN connections into my work.  They seem to have a default speed rule that is "time of day based" so that if they can't read the data you only get 3/4 of your speed or even less if during primetime.    I have Extreme and can only achieve 500-600K max until 11 pm when I can achieve 900-950K.  I always used to achieve 1.2 Mb/s until 5 weeks ago when everyone in my area downtown got hit with this.  Don't beleive any rebuttals about this post blamming the slowness on overhead as I use real Cisco equipment and netowrking tools to test these things.  Your issue may just be the flapping but I suspect the slowness may be part of the bigger issue most Roger's customers in the GTA are starting to experience with their deep packet inspection.

boblepp
I Plan to Stick Around

I found your post very interesting, thank you! I had heard recently that VOIP traffic specifically like Skype could actually be disrupted on purpose every 10 minutes so as to make Skype and others look like a poor service. While I have no way to know if this is true I do watch for 'dropouts' in Skype to see if there is a pattern. Maybe packet inspection is more intense or deeper on VOIP streams thus causing a delay. So far nothing I can put my money on, but I do get dropouts on many calls. If anyone else sees a pattern.......