When will the Rogers variant of the S6 Edge recieve the newest version of android? Telus has announced that their variants will recieve it on March 16th.

iankthompson
I Plan to Stick Around
In response to Meowmix
Options

So the Galaxy S5 get's it before the S6?  Something smells fishy here... There needs to be more communication about this than just that.  How can an older phone get the update first?

Meowmix
I'm a Trusted Advisor
In response to iankthompson
Options

Most likely due to the reason the S5 is 2 years old and they are pressured more to get that one update and the S6 either is having some issue with the update and thus why they are waiting or something.
0 Likes
Share
Reply

dough
I Plan to Stick Around
In response to Meowmix
Options

Your kidding, right? Summer 2016 is your best estimate? That's 2 - 5 months after every other carrier in the country got theirs! (rolls eyes). Can't wait for this contract to end. In fact, I might not. Might just pay off the phone and jump to... somebody (anybody!) else.

Meowmix
I'm a Trusted Advisor
In response to dough
Options

Yeah i am wondering the same but it seems like maybe the it's due to security updates and bugs they need to iron out but I Dont know. Who knows.
0 Likes
Share
Reply

Patthe
I Plan to Stick Around
In response to Meowmix
Options

Just some info, I guess the Edge 6 + is getting WI-FI Calling 🙂

Here some screenshot after instaling Marshmallow 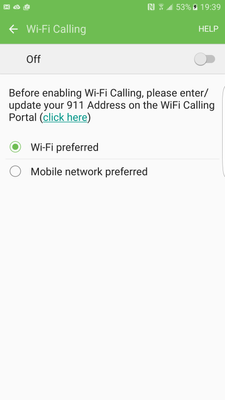 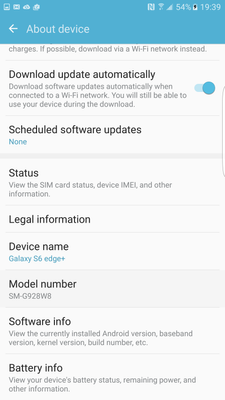 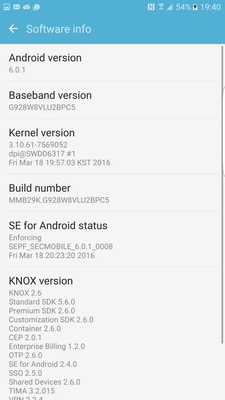 After talking with Rogers, feature not available quite yet, as they will probably activate it after the official update 😉

mcj
I've Been Here Awhile
In response to denzyl
Options

peruplay
I'm Here A Lot
In response to mcj
Options

does it has to be eastlink?
0 Likes
Share
Reply

mcj
I've Been Here Awhile
In response to peruplay
Options

When i did it i was looking for one that didnt have bloatware, was surprised when it contained the rogers apps. You could choose others if you wish, but if your on rogers the best option would be eastlink.
1 Like
Share
Reply

peruplay
I'm Here A Lot
In response to mcj
Options

have you experienced any issues since you did it? i will try later...

mcj
I've Been Here Awhile
In response to peruplay
Options

GibMcFragger
I'm a Reliable Contributor
In response to mcj
Options

It's all the same software. It's multi CSC. It doesn't matter which carrier you choose, it will install the correct bloat based off what SIM card you have installed. When I had my Edge+, I flashed the Telus version, and the Rogers apps were all there.
0 Likes
Share
Reply

peruplay
I'm Here A Lot
In response to GibMcFragger
Options

I have been with Rogers for just over 5yrs now it has been great but as far as the Updates to OS for any of there devices be it Blackberry , Apple IOS or Android they are extremely slow to release the update. Why is this the case

dynot
I Plan to Stick Around
In response to Steve1967
Options

I have been with Rogers for just over 5yrs now it has been great but as far as the Updates to OS for any of there devices be it Blackberry , Apple IOS or Android they are extremely slow to release the update. Why is this the case

They are just terrible at customer service. Once you sign up for one of their plans there is no incentive for them to keep you satisfied so they basically ignore their current customers and focus only on acquiring new subscribers.

Note that now that AT&T has upgraded their S6 to Marshmellow Rogers is now the last major carrier to upgrade their Android devices. There might be some smaller carriers but I think most major carriers have completed the upgrade.

I've been with Bell and Telus and they're pretty quick to upgrade with security patches and OS versions. What worries me most about Rogers is that the security on my device is just as outdated as the OS. Once my contract is up I will be moving our company's devices to a more secure provider.

zeroz3hereo
I Plan to Stick Around
In response to dynot
Options

Yes the security updates are alot more concerning than the actual OS updates. They are so slow, barely give any information to their customers and I think the same... They are focusing on trying to get more and more new customers. Perhaps Rogers is starting to go under? Who knows though. I just wish there was more communication with their customers when it comes to security.
0 Likes
Share
Reply

We’re working with Samsung and will be releasing Marshmallow on Android devices with additional functionality soon. The Galaxy Note 5 will be the first Android to get Marshmallow. The Samsung Galaxy S6 Edge and other devices will get the update in the following weeks.

Please make sure you retain the original software on your Rogers Samsung device so you can enjoy all our updates. Thanks for your patience!

Arkdom
I Plan to Stick Around
In response to RogersDarrell
Options

This is unacceptable. All carriers have released except Rogers. The only reason not to release would be malfunctioning bloatware. Even AT&T in the US which is closest to Rogers has released. We not talking of difference of days but weeks or months. Rogers please release and work on your bloatware after.
0 Likes
Share
Reply

Patthe
I Plan to Stick Around
In response to Arkdom
Options

Do like me, im running Marshmallow on my S6 Edge + for a while now.

No issue just change the CSC to another provider, I did Bell, upgrade to Marshmallow, then switch back to Rogers.

Now I have Marshmallow with all the Rogers upcoming feature like WIFI Calling and stuff. Currently not activate yet, but comming soon 🙂

peruplay
I'm Here A Lot
In response to Patthe
Options

I upgraded mine too via sammobile (firmware from canada eastlink)

what now when rogers release the upgrade (hopefully this year) ?

should we get the upgrade notification?

Arkdom
I Plan to Stick Around
In response to Patthe
Options

Interesting. Could you me through the process. Sorry don't know how to change provider.
0 Likes
Share
Reply

Patthe
I Plan to Stick Around
In response to Arkdom
Options