Welcome to the official Rogers Online Gaming Feedback thread! We will use this thread as a central point to discuss anything related to your online gaming experience on the Rogers network.  Our @CommunityHelps team will be here to help as usual.

We also recommend all of our gamers to sign up for the Rogers WiFi Modem Firmware Trial. Feedback from the Community has resulted in great improvements to the overall internet experience, specifically with regards to ping and latency on the Rogers network. For details of this program, please see this thread.

To learn more about Rogers and online gaming, check out our gaming page at www.rogers.com/gaming

Thank you for your continued feedback and support.


Keep getting disconnected from Destiny CGN3

I've had Rogers internet for well over a couple of years now. I've been playing Destiny on PS4 since launch day which was a year before getting Rogers high speed internet. We got the 150 mb download plan with Cgn3 router.

I started getting disconnected from Destiny with weasel error codes. I couldn't figure out what was causing it. After doing research and after much patience, I believe I figured out the issue but I don't know how to resolve it.

I set up a static ip address for my Ps4 and did the port forwarding. No luck. I'm kind of stuck now and unsure of what to do to get the best gaming experience while still allowing others to use the internet.

With the 150 package you can upgrade your CGN to the new CODA 4582 Modem, as a gamer it will help since it uses newer DOCSIS 3.1 technology which helps to lower ping.

Regardless with 6 people connected to the modem at the same time you shouldn't have any gaming issues, unless those devices are using lots of upload bandwidth causing the connection to stall.

I've been reading through the forums and trying to find solutions but I'm not that network savvy so I'm hoping you could help.

I've been having latency/routing/ping issues in my area for over a year. I recently moved houses as well and got the same internet package (GIGABIT with the CODA 4582 Modem) and both addresses seem to give me the same issues.

This is specifically for CS:GO, a first person shooter game.

1) My speeds are usually fine on the Ookla speed test.

3) I'm not exactly sure how to explain it, but when I play online, the connection just seems choppy and there are these micro skips that occur so when I am moving/running or shooting, it is very noticeable that it is skipping, and it is not related to FPS.

4) The past few weeks have been the worst it's ever been.

When I lived at my previous address, I remember contacting you about a Firmware 2.0.10.27 which showed minor improvements, but now it seems like this modem is on a different firmware.

uOttawaStudent
I've Been Here Awhile
In response to Datalink
Options

@Datalink Yeah we're right in sandy hill. Seems like the issue is worse this weekend. Signals are roughly the same as earlier, with the exception of the uplink ones being 48 now. I have my PS4 hard wired into my modem but have trouble with a baseball game specifically MLB The Show 17. I lose connection every time I play a season but do not have any problems with other games . I have Rogers Ignite 100 u internet service . Any help would be appreciated.

Breadwinka
I Plan to Stick Around
In response to laurjm1
Options

So Riot released a Lag Report Tool that compares all ISP in your area compared to how your connection has been.

RyzenFX
I'm a Reliable Contributor
In response to Breadwinka
Options

I have also noticed this as well. For my last 30 days I have an 87/100 which, to Riot's standards is GOOD, but could be better.

One thing I have noticed within this month is that from the 10pm-12am timeframe, there was a significant increase in latency (+30ms) up from the regular 27ms that I have been averaging. IMO, I think my ping shouldn't be that high because in late August my area was segmented (node split).

Right now it does not seem like a big deal, but compared to Bell's average ping of 13ms, boy do I feel a bit jealous. I'm really hoping that Rogers will launch OFDMA very soon as it should lower our ping a bit more. OFDMA also comes with an increase in upload bandwidth which will help reduce congestion in the Rogers network. Congestion is something Rogers has been struggling with, and I can't wait to see benefits that OFDMA brings.

I've been experiencing crazy packet loss for too long now. 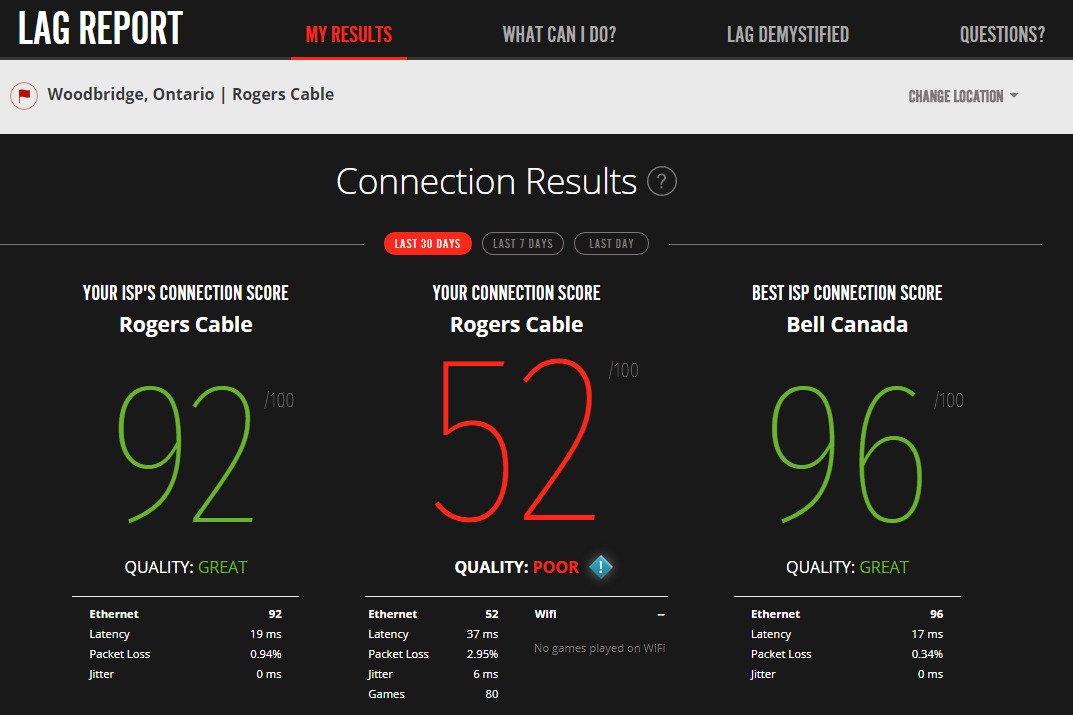 Naeng
I Plan to Stick Around
Options

Atleast it's not too bad in the main streets on Bloor 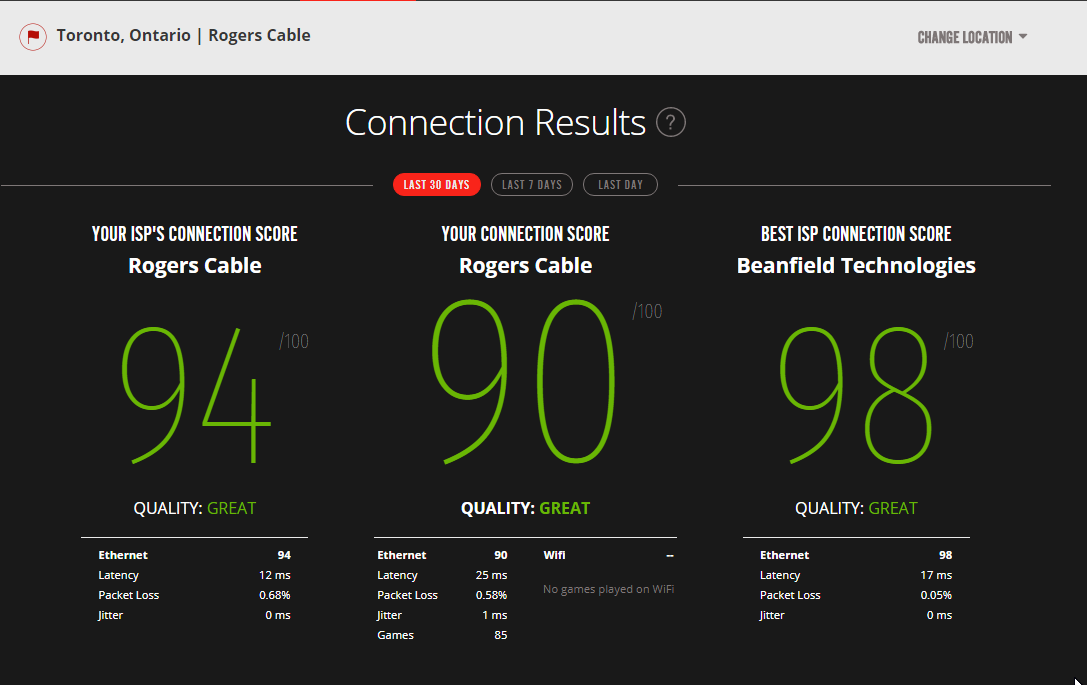 AhmedAskar
I Plan to Stick Around
In response to AhmedAskar
Options

Back again, with the same issue. Had the CGN model using wired connection, didn't have many issues streaming on twitch, but the WIFI would just never work. Now that I upgraded to CODA modem, WIFI finally started working properly, upload speed goes back to what I used to have, dropping frames constantly every 30 seconds, dropping bitrate to 0kb/s. Rogers really need to do something about this.

I recently got the new CODA router/modem hoping it would fix some problems I had with online gaming (League, CSGO) where the ping would sometimes keep going up and down from 50-90 ms every 7-8 seconds, with the new modem the ping so far looks like its gone down a little bit and is a bit more stable but even when stable I can feel there to be some jitter/lag and its just not smooth. I ran DSLreport speedtest and my bufferbloat would go over 1000ms then go down to around 500ms and stay there while running the download test, I googled this issue and found that I can fix it by accessing the routers QOA settings and limiting the max speed but I cant seem to find these settings, has anyone else had these problems or know a solution?

Mythen
I Plan to Stick Around
In response to st0j
Options

The ping bring all over the place is a fact of life on this network. I have been a customer for almost three years. Haven't found a solution yet.
0 Likes
Share
Reply

Vurog670
I Plan to Stick Around
Options

Connections just gotten worse over time, called rogers several times and they keep saying they are still "investigating the issues" and say its area related. It's gotten so bad at some points that I can't even browse the web not to mention the insane lag spikes I get while in-game. Anyone had any similar issues lately? Im thinking about throwing in the towel and cancelling my service all together

mattb2006
I Plan to Stick Around
Options

mvinent
I've Been Around
Options

I upgraded to unlimited internet with the gigabit router (Hitron CODA-4582U).  I have noticed that while on Minecraft servers I get disconnected frequently now.  I get the following error:

Internal Exception: java.io.IOException: an existing connection was forcibly closed by the remote host

This usually happens when I am doing something such as mining or fighting.  It is very annoying as it happens repeatedly.

I have no idea what to do to fix this problem.  Any help would be amazing.

Nadernt
I Plan to Stick Around
Options

Ok so my ping to Blizzard's Overwatch server has been hot garbage lately during parts of the night for some reason.

I am getting a steady ping of 100ms ranging up to steady 180ms. I noticed it just seems to be a problem with the Overwatch servers, so I ran a trace route to the IP address they provide for the US East connection. I noticed on one of the hops, my ping goes up. Googling shows the IP address is located in France, and I know that geolocation for IP addresses isn't very accurate, but at the end of the day I'm trying to ping Chicago from London, ON.

So to confirm it's routing issues, I turned on a VPN, using both Montreal and Chicago settings, and my ping went back down to 40ms. I turned it off, and it went back up to 100ms.

The thing is though that earlier today this high ping wasn't an issue. Maybe there is something going on behind the scenes that is causing poor routing during certain times of the day, I'm not sure.

Attached are pictures of a tracert (with VPN off and on results), and a pathping (no VPN) which show the issue I believe is related to routing. 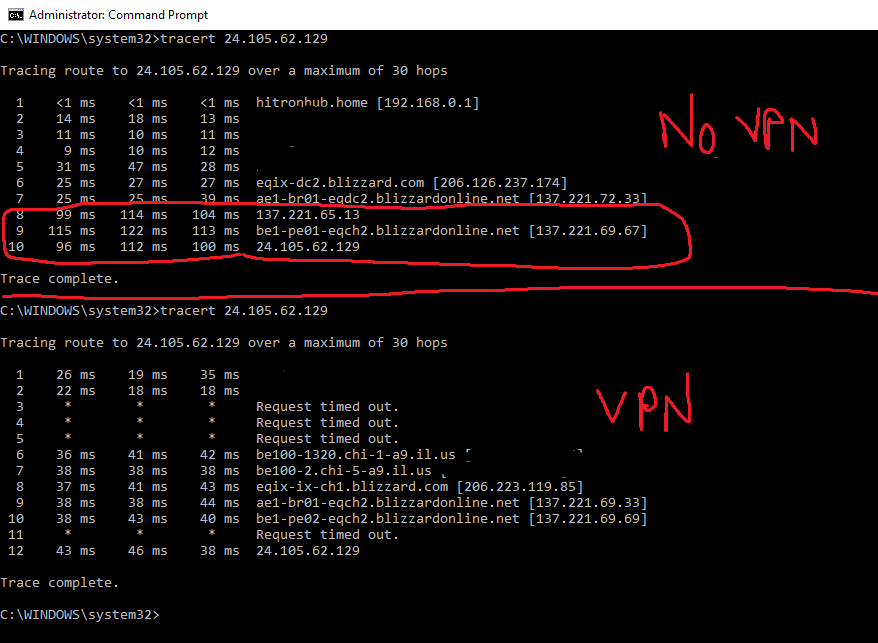 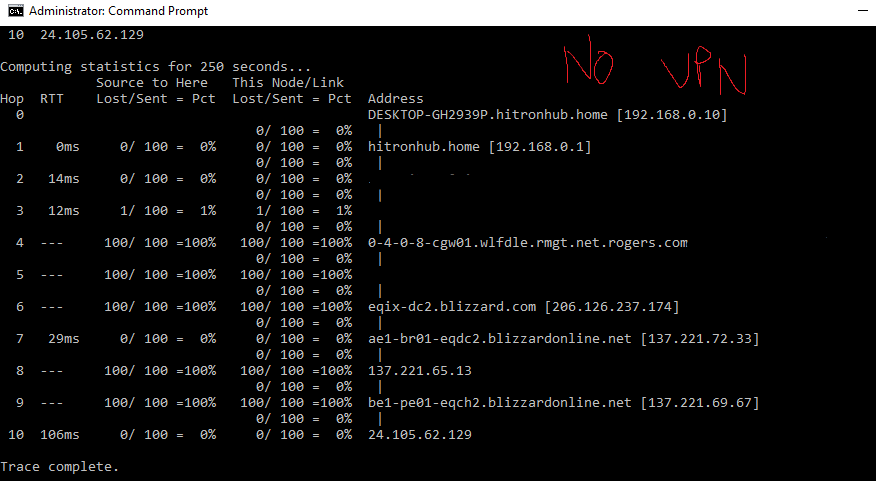 So in summary, I'm getting bad routing to Blizzard's Overwatch US East server (PC), and enabling a VPN has fixed the issue. However, I shouldn't need a VPN for gaming as they can be unreliable and have higher ping over what should be normal.

I edited out certain IP addresses for privacy reasons. If anybody could provide any insight as to the issue here, I would appreciate it. Thanks.

Vurog670
I Plan to Stick Around
In response to Nadernt
Options

Same boat here, I use this software called "Haste" for league and overwatch which gets the job done pretty nicely. I am paying for it though which I shouldn't have to.

A technician come over today and installed a booster on the coax cable, He ran a speedtest and said everythings fine, I tried to explain to him that the issue is with latency in online games but he didn't really seem to care. He just said we're giving you the proper speed and thats it and left.

This is getting pretty frustrating.

TFM_Jeff
I Plan to Stick Around
In response to Vurog670
Options

I game on PS4 (wired), would it be wise to set the Router Mode to IPv6 instead of Dual? Does anyone know if that would cause issues?

@TFM_Jeff, setting the modem to IPV6 only will cause issues:

2.  There are very few web sites that only run on IPV6, so this would lock you out of the vast majority of web sites in operation.

Routing and peering issues would have to be addressed by @RogersKevin or @RogersDave.

TFM_Jeff
I Plan to Stick Around
Options

Tech gave me the usual "your levels are fine" but sent someone out regardless, upgraded to the CODA modem and yet I still have issues. It's much more prominent at night, which is great because that's when I game and that's when tech can't come out to actually witness the issues.

Anyway, anyone else play Siege? If so, are you experience more than usual lag?

daveinsurgent
I Plan to Stick Around
In response to TFM_Jeff
Options