I see things that are clearly wrong in the program guide. Is there a way to get it to update? I'm trying to record the Bahrain Grand Prix and it doesn't show up, though TSN's site clearly lists the schedule.

There's been sign-in issues here on the forums recently and right now is the first time I've been able to sign-in, but I'd been wanting to post since last Sunday:

Once again, because of incorrect Guide data, I missed a Formula 1 race - this time, the European Grand Prix, from Baku Azerbaijan. Did anyone else miss it for the same reason?

As Series Recordings don't work for F1 broadcasts because of the way they're titled (in format: "SPORT NAME: Event Name", instead of Event Name being in the Description), last Wednesday night I did a Guide Search for "Formula One" and found the weekend's practice, qualifying and race broadcasts, as well as a few other items like Pre-Qualifying, Post-Qualifying, Pit Lane Live(Pre-race), Drivers' Parade and Post-Race. I went into whatever items were found, hit Record, then Exit to go back to the Results, then Down, then in to the next one, and so on. I was ready for a weekend of racing!

- On Friday evening, I watched Friday's Practice-2, which had recorded as intended.

- On Sunday evening, I watched Sunday's Pit Lane Live and Drivers' Parade. And then I clicked OK on the remote to watch the race. Instead of F1 racing, I saw TSN SportsCentre. I fast-forwarded. Yep, all 2 hours of it was SportsCentre, on re-runs.

Thankfully, Rogers puts the races on VOD a few days after the event, so although I am not happy about what happened, I could certainly be less happy. But that does not mean no action is required.

Anyhow, having FFW'd to the end of what wasn't the race, I deleted it. As I did so, I noticed across the top of the screen the words "Australian Grand Prix". Weird, the Australian race was held in March! So for this week's race broadcast, it was wrong program/wrong channel, and wrong title.

And I don't believe I was mistaken about the "Australian" thing in the title, either, because I still have on my box (from this past weekend) a title: "Formula One Racing Post Race: Australian Grand Prix", recorded Jun 19 2016. This is actually the Post Race for the European Grand Prix - so it's right program, wrong title. 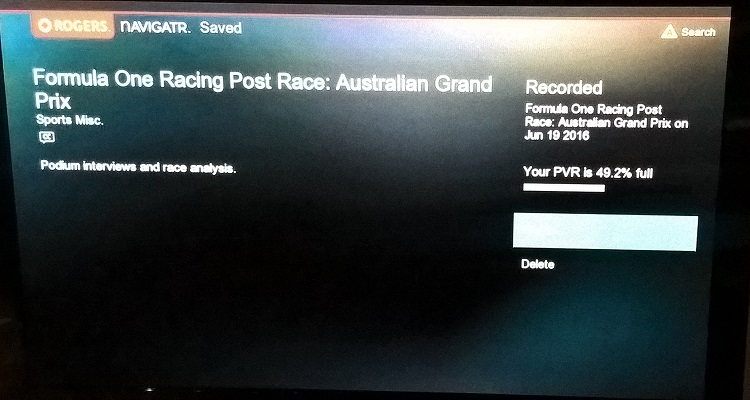 Anyhow, because the stupid IPG doesn't report what channel it recorded on for one-off programs (though strangely it does for Series Recordings), I can't tell which of the 5 TSN channels it recorded on. Had ch# data been present, I would have know what channel my unwanted SportsCentre recording had been on, so I could have (after the fact) checked against the schedule on TSN.ca.

I do know that the (pre-race) Pit Lane Live and Parade broadcasts aren't typically shown on one channel with the race uniquely on another -- one of the TSNs will show everything --  and I also know that the race(only) is sometimes aired live on more than 1 (TSN) channel.

You'd think that all my Search Results for race-day broadcasts should have been on the same channel #, but that's not necessarily the case. When a specific 'episode' title is found by the Guide in multiple timeslots or on multiple channels, Search ONLY offers ONE option, the lowest channel # at the earlier time. This is a major flaw in NAVIGATR,  and not exclusively an issue relating to sporting events - it affects lots of programming, in particular 'time-shifted' broadcasts such as news and prime-time programming.

So in summary, this goof-up has once again exposed a number of serious Guide Data and NAVIGATR issues that need to be addressed. How old is this thread now?

I've never had any problem recording the Formula 1 races, the hardest part is finding which TSN channel. Using the search function I search for "FORMULA". But I'm only interested in the Qualifying and Race. I don't have enough time to watch the pre-race and post-race stuff.  I also find it faster and easier to set my recordings using the RAPTV web app.  But thanks for mentioning ROD. I never knew it was available there, just awkward to find. You have to go to Sports & UFC > TSN > Formula One. Searching for "FORMULA" won't find it because the title is the date, like "2016.06.18 ...".

Mind you, I don't have Navgatr, so I'm not seeing quite what you see. But agree with not seeing channel numbers for recorded programs, only for scheduled ones is a nuisance, as is guessing which TSN channel to look for.

For Baku the coverage was different than normal:

If you wish to follow F1 discussions, check out the following:

Lately I've been waiting a few days before scheduling my recordings because they have been changing around. Even after waiting until say Wednesday, I always check again the day before via "AnyPlace" because any "last minute" deviations will show up there.

North Carolina basketball game on schedule at 6:00 PM on Channel 440. Starting time of game has been moved up to 4:00 PM. I hope this change will be noted in the programming schedule so I won't miss this game.

Cando
I've Been Around

Just wanted to see if anyone else has noticed the programming errors in the guide - mistakes in the show titles/descriptions/"new" labels etc. mean that my scheduled shows are not taping!

"The Daily Show" versus "The Daily Show with Trevor Noah": even if I set it to record the same time slot on any day of the week, changing the title of the show means it is not recognized and so not recorded.

"@midnight" versus "Midnight": same problem, and it is also incorrectly categorized as a Drama! I get that this show has been moved from its original timeslot, but that was months ago.

On top of this, frequently new episodes are not being labelled NEW, and so will not record (sometimes, even when I have set "all episodes" to record!).

I've heard that Rogers has out-sourced the guide - please look into fixing these unnecessary errors! What's the point of scheduling a weekly or daily recording if I have to check up on it nearly every day?

@Cando:  I started the following thread a while back on the IPG issues:  Your issues and many more are discussed there.

The "new" modifier works for some programming and doesn't work for others.  Based on experience I have some of my recordings set for "new" (either because they usually work, or because I don't care if I miss one, or if I know it will air again later that week and I can catch it then).  However, for many of my recordings I do not use the "new" modifier because it is often incorrect and set it for "All Episodes".

The IPG has been outsourced by Rogers for a long time and the supplier was changed a few years back making some things better, some things worse.  You need to use your experience for series recordings.

Another link below that may be useful and explain a bit about why the IPG is the mess it is: