User2014
I Plan to Stick Around

Hi Bruce   Thanks for the youtube link...is it sad that watching it made me nostalgic for the time when my PVR was easy and even helpful?

I had forgotten the one click simplicity that allowed me to sort all scheduled shows by name, date, channel or series   In what universe is launching a produ ct with less features termed an upgrade?  "Loving my 2016 car...it goes backwards only and none of the dashboard buttons work"

Someone at rogers should put this video on a powerpoint slide as navigatr 2.0    Make customers happy again and get a big promotion.....

Jack22
I Plan to Stick Around

I will try that next time.  Thanks for the info. Just learning about such things.  I was only trying to thank someone for their help.

@Jack22 if you want to edit or change a post you made, but the time has expired and you can no longer do it, you can always click "Report Post" and ask for it to be deleted.

shan-man
I Plan to Stick Around

I see a bunch of new people joining the thread. Just posting a reminder about the petition to rollback Navigatr:

Further to the topic of conspiracy and incompetence:

It looks like the new Navigatr is central to Rogers plans to combine Internet video, called OTT in the industry

Do the screen shots look familiar ?  Notice a few brief glimpses of SAVED in the menu.

Other videos show how we can order things interactively,

e.g.  Blue Jays Tickets for the next game complete with seat selection.

It a pity for Rogers that incompetence took over  in the worst PVR management since the VCR.

Duuno who did the PVR section, but it lools like the work of neophytes.

Vodaphone ( Rogers CEO id form there), Cisco, Technicolor are all listed as customers for Espial's software with only a vague references to a Major N.A. cable co, but the screens speak for themselves.

One might also surmise, that Rogers deliberately crippled the PVR functions.. but my guess is it just plain oversight and/or stupidiy.

To save the baby (looks like it has promise) you goota start over with hopefully a new team and replace the PVR section.

iris42
I Plan to Stick Around

WOW...that says it all, right down to the small font. It is too bad that Rogers chose to disregard the current needs of its customers I n order to scramble over us for their survival in the market. 😞
Message 796 of 1,699
1,326 Views
Report Content
Reply
1 Like
Highlighted

One thing that doesn't seem to ring true - the comment near the end about how quickly operators can make changes.

Certainly not true as far as fixing the premature baby Rogers pushed out.

@neilpalmer400  I believe he compared it to other web sites that make changes as often as 10 times per week.  Can you imagine what it would be like with Rogers programmers changing the way your PVR worked twice a day?


Further to the topic of conspiracy and incompetence:

It looks like the new Navigatr is central to Rogers plans to combine Internet video, called OTT in the industry

Do the screen shots look familiar ?  Notice a few brief glimpses of SAVED in the menu...

...It a pity for Rogers that incompetence took over  in the worst PVR management since the VCR.

Duuno who did the PVR section, but it lools like the work of neophytes...

One might also surmise, that Rogers deliberately crippled the PVR functions.. but my guess is it just plain oversight and/or stupidiy...

To save the baby (looks like it has promise) you goota start over with hopefully a new team and replace the PVR section.

Good catch. In viewing the video, it's not obvious that the 'SAVED' items use a tiled interface, but I agree it's possible, and even likely, considering that's what the APP and ON DEMAND screens look like. The difference, of course, is that apps and on-demand titles have poster / graphics designed to advertise the app or show, whereas once you save something to your PVR, you're already 'sold', and what you now need is easy search -- JUST LIKE SEARCHING THROUGH A PROGRAM GUIDE!!!

If our upgrade had included a lightning-fast guide like they showed in the video, and equally fast (and separate) lists of recordings and shows set to record, we'd all be thrilled and delighted. But NOOOOOOOOOOO!

Having taken a quick look at the Espial website, I note that they also offer Professional Serivces (sic - as spelled on their website menu - good attention to detail, that) that specifically include:

"User Interface Design and Optimization – Customizations can be as simple as translating to your subscriber’s language or as in-depth as a uniquely designed user interface, in all cases Espial Experience can make your vision a reality. Once created, Espial can optimize your end-toend (sic) system to maximize performance."

So like most enterprise software platforms, the customer (Rogers in this case) can 'redesign' the user interface and customize it to their hearts' content, either hiring Espial, or some 3rd party, or even doing it themselves in-house. I'm sure this is part of the problem.

My experience with large companies who buy and customize their enterprise software, is that the task of designing the software is delegated to a team of know-it-alls and lightweights who don't actually have to use the software, and who therefore make interface (and programming) decisions that can easily render the software useless for its intended purpose.

When the company I worked for bought Oracle, which comes with a series of accounting and project management modules, it was considered too expensive to have Oracle make modifications to the system, so our geniuses decided they would do it themselves. A complete disaster.

Whether Rogers hired Espial directly, or just bought their software and then decided it would be cheaper to hire smaller / local / familiar / in-house programmers to do the actual design and coding, I see indications that the same thing happened here.

Regardless, Rogers could *easily* insist that the 3rd party fix whatever needs fixing (Tiles, anyone?), but before the roll-out some Rogers team 'approved' the software, so I'm sure Rogers will be on the hook for any additional cost.

Until there is a serious negative impact on Rogers' bottom line, I will take bets that nothing changes.

All the above does *not* change the fact that the Tiles Interface for the PVR section is in no way a requirement of IPTV, or the Espial software. 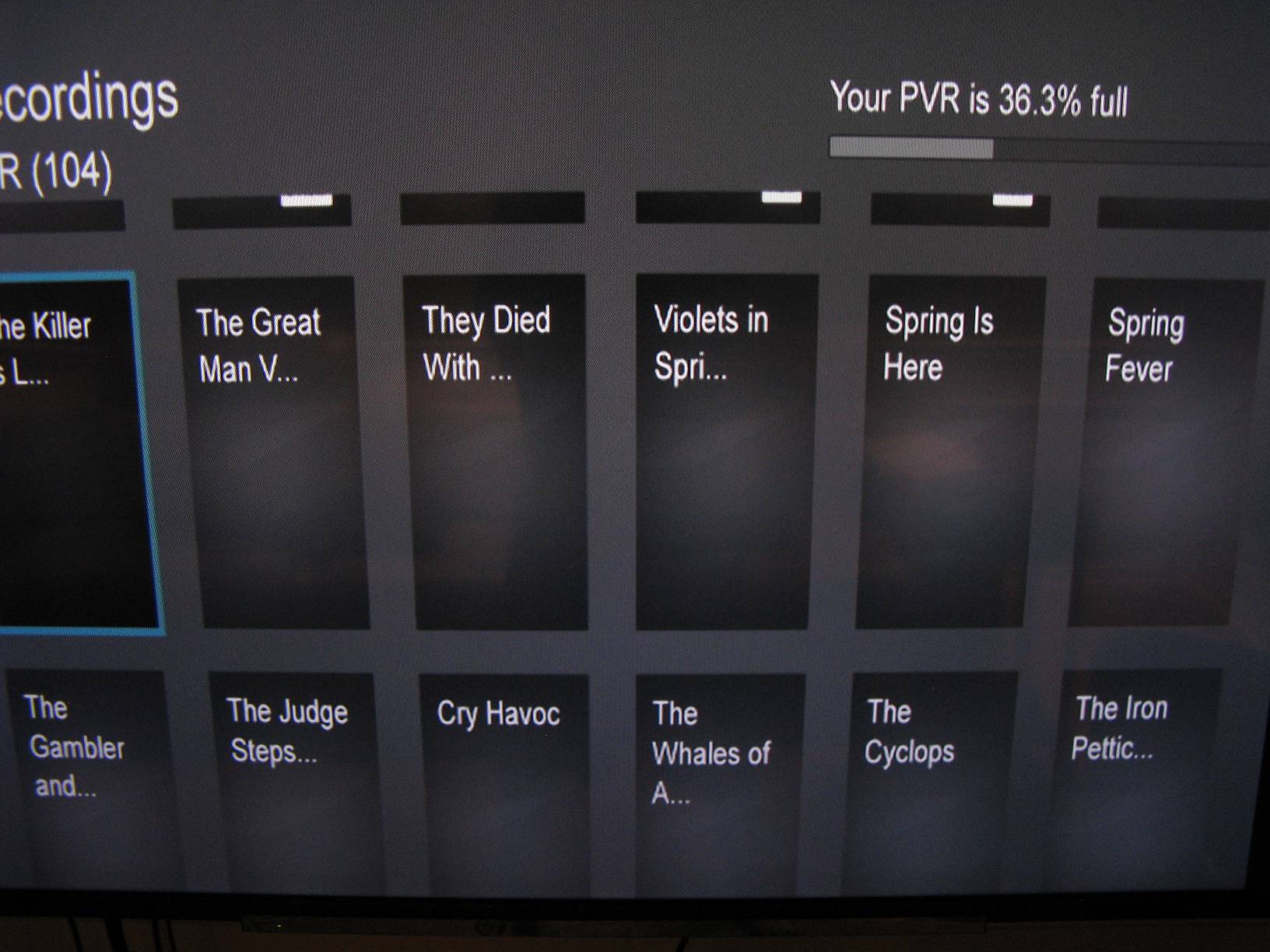 Lessee... First I think I'll watch "The Gambler and the Media Company" and then maybe "The Judge Steps in It", followed by "The Whales of Anarchy". Classics one and all...

And yet there's so much space left in the tiles.

You know what? I bet if the tiles were WIDER and NOT SO TALL, say maybe full page width and one or two lines high, the complete title might fit, and there might even be room for things like the year the movie was made and the recording duration.

Yeah, that's the ticket -- one very short, very wide tile per line, and you could probably fit the same 12 tiles on the page, or maybe even more, say 15 or so.

And the font could be bigger! Yes! I see it all now! Tiles are the way of the future! Just shorter, wider tiles!