Update... tech came on Wed. and changed out the modem to the 'newer' Hitron AC... no change to service... did a bunch of other things (remove splitter which was provided by Rogers previously, etc. etc).  No change.   Hooked up his laptop and saw the >5% packet loss for himself - even though I had pingplotter running for him and he could see all the red status bars!  Which was fine, guy doesn't know anything about me or what I know about networking.  Nothing resolved, reporting it to maintenance.

Tech supervisor and another tech visit on Thursday.

Turns out our building has 3 MDUs.  Two of which are OK.  The other one has massive problems with packet loss (upwards of 20% he said).  The bad MDU has been put on maintenance notice and they moved my feed to one of the 'good' MDUs.

This solved my issue, for the most part.

I still get random packet loss spikes that kill VPN connections - not at the 38 minute intervals I had before, though.  I'm using pingplotter to keep track, the spikes were  seen at 0220, 0710, 0720, 0820 ... hmm bit of a pattern?  It's still early morning and I will keep correlating the VPN drops with the spikes that pingplotter records.  Who knows what will come of that data - I'm not sure who in Rogers would be able to see the problem clearly.  (I had to explain pingplotter to the tech and his supervisor - not that they were uneducated, just maybe not the focus of their training/experience.)

I'm curious about the packet loss spikes... how should I go about reporting that without getting the run around?  It does break things e.g. tcm streams longer than an hour - which can happen on long transfers from slow servers, or VPN, or gaming, etc.

Thanks for all the guidance the RE's have given in this thread.  It has helped a lot.

It is enough for my VPN and any gaming to be affected (disconnected from VPN and game lags/sometimes disconnects).  Video streams sometimes buffer but due to the short spike burst we usually don't notice.

RogersHelps on twitter has been good in the past with MDU issues but this time gave up and sent me here.

Modem is bridged, but tested with it in gateway and using wired/wifi - all have same symptom.

@slcfam have you tried running the modem, in Gateway or Bridge mode with just one single pc/laptop connected via ethernet, without any other device connected just to see if the pattern repeats itself with the modem isolated from all but one device?

What firmware version are you currently running as seen in the Software (firmware) version on the STATUS tab, 2.0.10.27 or .29?

Thanks for the reply @Datalink.

I factory reset and ran a single machine directly to the modem over ethernet (port 1).  Packet loss still occurred and in fact seemed to be more frequent although not every event was enough to kill tcp connections.  Inconclusive results, however, as I wasn't able to run this configuration very long.  I plan to do more testing when it doesn't impact the family too much.  (Troubleshooting a problem that only happens once an hour is tedious!)

Ok.  Looks like I've figured it out this time.  The DHCP server is issuing a lease time of only 54 minutes for some reason.  How nobody at Rogers made this connection I'm not sure.  But I've watched the renewal happen multiple times now and each time it breaks TCP streams most of the time and VPN connections every time it happens.

Used to be 7 day leases, IIRC. 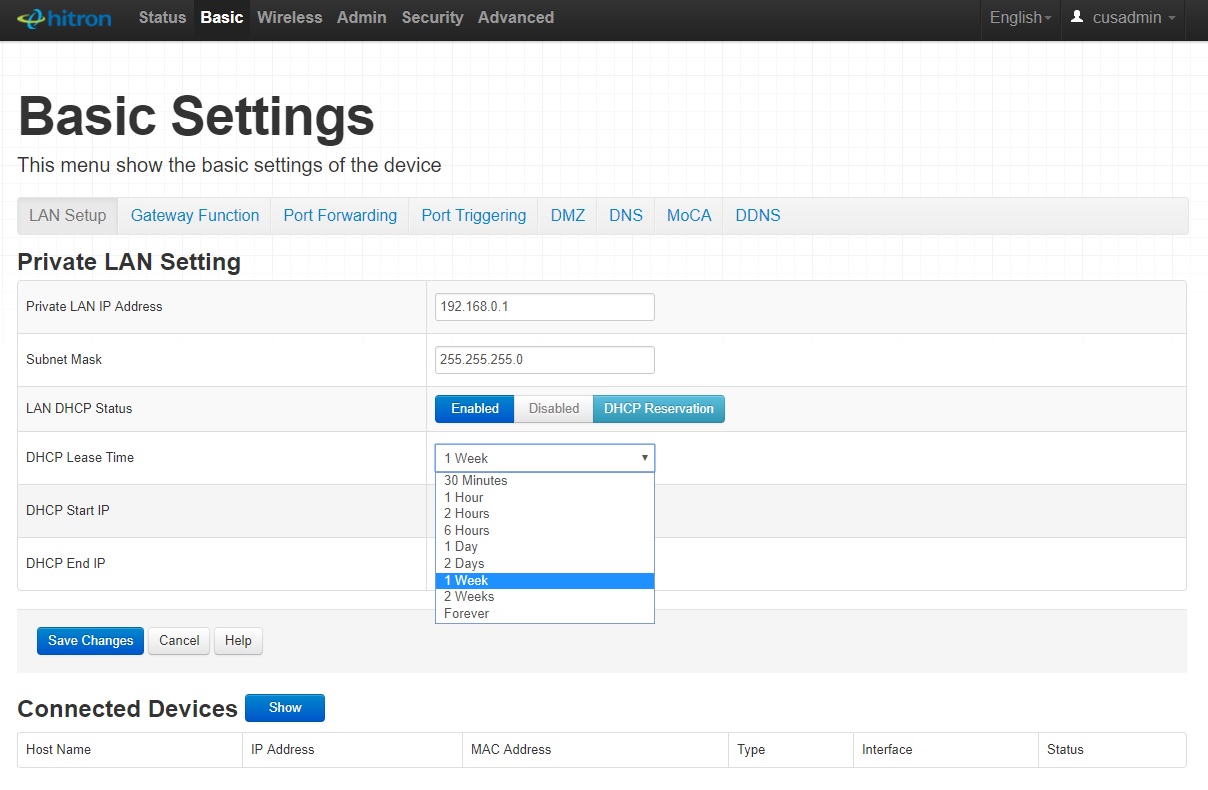 I had put the modem back in bridged mode this morning; maybe I will factory reset, again 🙂 and take a look.  But that will have to be this afternoon.  (Currently doing this from remote/VPN and VNC'ing.)

*Edit:  Although I didn't think any of the webgui settings would have any effect on a bridged modem?

*Edit2:  Your attached image didn't show up when I replied originally.  This is not a LAN dhcp issue, it's from Rogers itself to me.

Got a hold of a repair tech who, strictly off the record, stated that Rogers will shorten the DHCP renewal times when maintenance is in the area or provisioning new IP blocks or re-segmenting the network.  Why this was told to me off the record, how true it is, I don't know, but nobody at Rogers has been able to make the connection between the DHCP leases and connectivity blips.  "Everything's fine on our end."

Now, do I wait until they sort out whatever-it-is-they're-doing or do I bang on tech support until someone listens?

Final message from tech support was to see if the Network Architect or Project Manager for Gaming could answer how long the DHCP lease will be set to such a short renewal time.   I'm done bothering you fine RE's, appreciate the attention.