goldenegg
I Plan to Stick Around

Two weeks ago, I upgraded to the Gigabit internet package.  Since upgrading, I've never been able to hit 50Mb/s for upload.  The speed jumps around a lot, from 18Mb/s - 35Mb/s.  I think the highest I ever got for a short period of time was 39Mb/s.

I had a tech out who confirmed the slow speed, but didn't find a problem with the line.  It was escalated to maintenance, who later closed the ticket saying they found nothing wrong.  Another ticket was opened, again being closed saying no issue found.  Yesterday, I was asked to replace the modem, as it was likely it was faulty.  I did that today and still having the same slow upload speeds.

Has anyone else had issues with upload speed on the Gigabit plan?

Attached is a picture of my signal strength.  As far as I can tell, everything looks good. 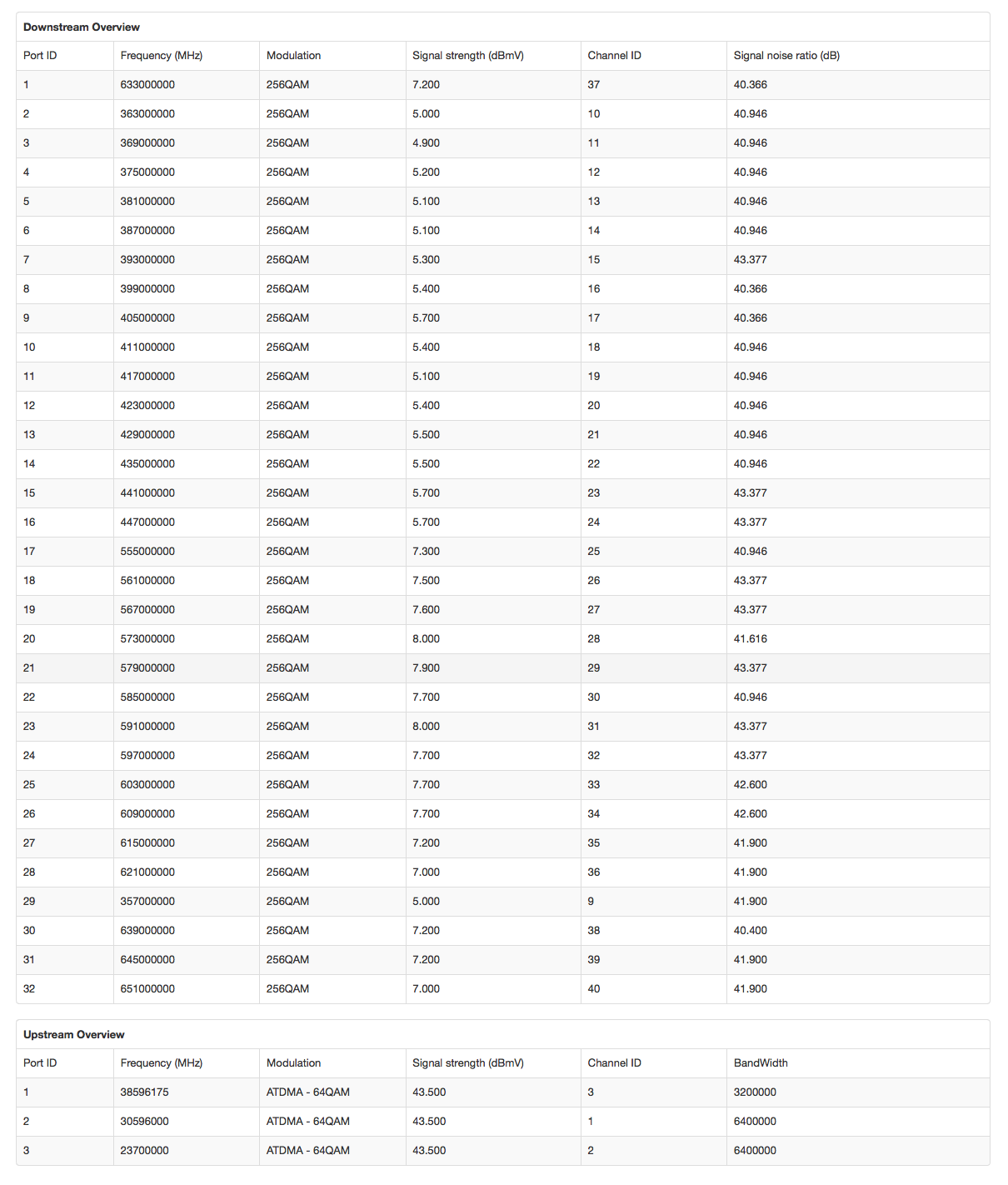 I am experiencing the exact same speeds as you, upload between 20-38mb/s on average. There is nothing you can do, this is a congestion issue. Swapping modems, having a tech come and replace cable/splitters wont do anything to fix this. Let's hope Rogers will work on the Nodes and give us more upload capacity.

goldenegg
I Plan to Stick Around

If that's the case, they need to stop advertising 50Mb/s speed. I already have another issue open with the Ombudsman, so I'll bring this to her attention as well.
Message 13 of 189
3,678 Views
Report Content
Reply
0 Likes

Thats one thing you'll see just about EVERY ISP do.. sort of semi covers them for things like this 😞

If you look at the pages.. it says UP TO  X Speed.

That being said... yes if its an area that they provide it to.. that yes they should be meeting that speed there.


Overall, they need to advertise it as that.. as they ARE able to reach those speeds in areas.
There may just be other areas with problems as well.

I know for sure that Rogers can reach the upload speed of 50 Mbps because I used to get that when I signed up for gigabit internet in may. Basically from May to mid July I had an older modem firmware for CGNM-3552 (4.5.8.18?? not sure but was lower than 4.5.8.21) and was also on the Cisco CMTS. Those were the only times I actually got their advertised speeds. I'm not sure if my modem updated first or I was switched onto the CASA CMTS but after one of those happened both download and upload speeds have been inconsistent and upload speeds rarely going above 30 Mbps. I don't know if the modem update caused the slowdown or if its something with the CASA CMTS.

Cisco CMTS only offered 500mb/s down, 50up.
CASA CMTS is 1000mb/s down, 50up.
This issue is because of congestion, much more people are on higher speed plans now, so upload is taking a hit. Hopefully Rogers resolves this issue soon. This is easy to prove because during peak hours (3pm-11pm) my upload speeds are terrible, like 20mb/s. If I run a speed test as 2am, I can git 45mb/s upload. This shows that it's not a firmware issue, or cabling issue, but rather a congestion issue.

The Casa CMTS may be congested but I still see not so great speeds even after peak hours.

This was a recent speed test done at 1:00am

I ran this multiple times but it still had poor results.

I'm a frequent streamer and uploader and today I noticed that my bitrate for my stream was barely getting higher than 0 kb/s. Confused I quickly did a speed test and noticed that while my download speed was normal (actually higher than normal) I pay for the 150 ignite plan and am getting closer to 200 mb/s -- my upload speed was barely cresting over 0.50 mb/s. I tested this both at speedtest.net and tesmy.net

I don't want to waste anyone's time. I know I have a tech coming out on Tuesday but this is an issue affecting my day-to-day work so I was just looking to post my issue here too, just to see if there was any more troubleshooting I could do before the Tech comes to test things. I just found it odd that only my upload seems to be affected while my download is still working normally. My Cable TV also remained unaffected during the whole process.

I'm including Downstream and Upstream numbers - which look mostly normal to me. The Downstream seems to be running on the high end, but I've not noticed issues with that.

@MallardQuack, you're downstream signal levels are pretty high, they're normally down at 0 dBmV.  Having said that the modem range is - 15 to +15 dBmV, so, the levels are still within spec, however, typically from what I've seen in the past, customers start to have issues when the signal levels creep down to around -8 or creep up to around +8 dBmV.  Not a hard and fast rule, just an observation.  Your signal to noise ratios are ok.  The upstream levels are fine from what I see.  Typically they're in a 36 to 40 dBmV range.  But, that depends on what modem you have.  Do you have a black CGN3xxxx modem, or the white CODA-4582 modem.  The CGN3xxxx modems have a product sticker at the back of the modem indicating exactly which version of the modem it is, same with the 4582.

Do you typically use wifi or ethernet?  If you're a wifi user, can you take a read thru the following post, specifically the section on wifi settings and wifi monitor applications:

@Datalink I have the CGN3ACSMR modem. Also typically I use ethernet while working, but have wifi for my phone and laptop.

Running tests on Speedtest.net and Testmy.net today has shown a return to normal upload speeds so I'm going to keep monitoring that. Just not sure what would have changed in the last 12 hours or so.

Message 20 of 189
2,981 Views
Report Content
Reply
0 Likes
Where do you want to go?
Topic Stats
Recent Knowledge Base Articles
View All