Add me to the list of not working, as soon as I enter in my code it says device not supported and to contact Rogers.

there is no registration, it asks for your phone number, sends you a text with code, and then we enter out code.

when we enter the code, it returns the error - device not supported.

I upgraded from S7 edge, and it was working fine on that device.

Seems like some are able to use it meanwhile others accounts somehow shows it's not working. I wonder if this account related or something.
Message 22 of 40
11,804 Views
Report Content
Reply Reply
0 Likes
Highlighted

Wifi calling is not working either on my S8+. After entering the verification code, I get: 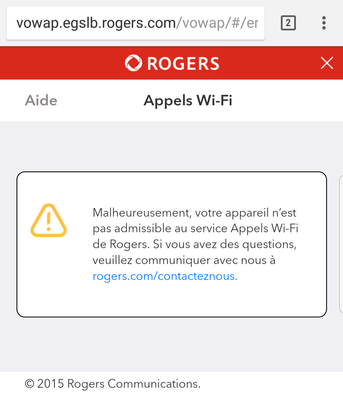 Hmm tried mine again and worked like a charm. I do notice that sometimes when u turn off WiFi Calling on the toggle and turn it back on sometimes it won't connect unless u reboot the device. This happened on my LG G4 and iPhone 7 Plus.

Again i wonder if this is account related that some are having thisnissuem
Message 24 of 40
11,662 Views
Report Content
Reply Reply
0 Likes
Highlighted

But I had to contact Rogers. I was told that one of their system did not detect my phone correctly. They had to reset the service for my line. After the reset I was able to activate Wifi calling on my phone.

Hope this helps someone else.

robertz
I Plan to Stick Around

That's what happened with me when I first tried to enable WiFi calling. If anyone follows the steps to enable it and it fails, call Rogers support.
Message 27 of 40
11,638 Views
Report Content
Reply Reply
0 Likes
Highlighted

StephenWagner7
I Plan to Stick Around

Wow, so I've been dying of lack of reception for years now (I had a Lumia 950XL, supported Wifi Calling but Rogers doesn't have Wifi Calling deployed network wide, only select handsets).

So I finally decide to jump ship to resolve the reception issues. Picked up a new S8+ from Samsung. The reception is worse than my Lumia 950XL, and Wifi calling isn't working on it.

Called Rogers corporate support to find out what the deal is with Wifi calling, apperently Wifi calling only works on Rogers branded devices? Seriously???

Rep told me I should return my handset, and get one directly from Rogers. There's no way (I've had so many issues in the past purchasing devices for me and my users on my corporate account from Rogers, now we only buy direct and unlocked).

Does anyone know if this is permanent, or will Rogers eventually turn on Wifi Calling for unlocked S8+'s purchased directly from Samsung?

I heard they allow Wifi calling on unlocked iPhones, whynot other devices?

Unfortunately Apple and all the carriers have a special agreement with that. Actually most iPhones at launch only get WiFi Calling when it's a carrier branded device. Unlocked models wait months later but with the iPhone 7 and iPhone 7 Plus, they started the WiFi Calling immediately at launch for unlocked models.

Unfortunately this is something that is permanent for other device like Samsung, HTC, Blackberry, Sony, LG and other devices. You must get a carrier branded device in order to get that feature.

Sadly this is something that has been going on for a couple years now.
Message 29 of 40
11,497 Views
Report Content
Reply Reply
0 Likes
Highlighted

StephenWagner7
I Plan to Stick Around

This really sucks. Either way I like the S8+, I miss the live tiles on Windows phones though...
Message 30 of 40
11,490 Views
Report Content
Reply Reply
0 Likes
Where do you want to go?
Topic Stats
Recent Knowledge Base Articles
View All