I purchased a LG G Pad 3 LTE Tablet( Model: V522) from Rogers in Jan 2017. It originally came with Android™ 6.0.1 Marshmallow.  Fast fwd an update to Android Nougat 7.0 was released around end of Jan-1st week of Feb 2017. Everything worked ok after the update except WiFi issue on 5Ghz frequency.

If I do the same speed test on any other 802.11ac compatible wireless device in household results of the speed test range 178-185 Mbps downloads.

Clearly this is some kind of O/S issue....Has any one else experienced the 5Ghz performance issue here since i did not see a single thread on the Rogers forums for this tablet. However there is a thread on Fido forums.

-I called LG Support and they were hopeless . they asked me to contact my ISP why they limiting my speed "SMH"

Any other Lg Tablet owners/users here can confirm the above issue? 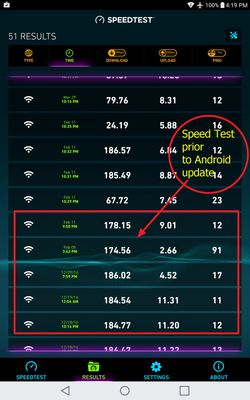 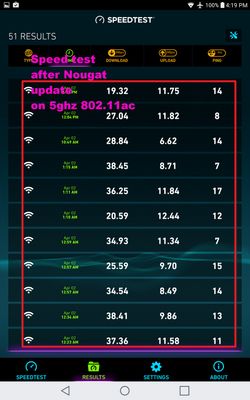 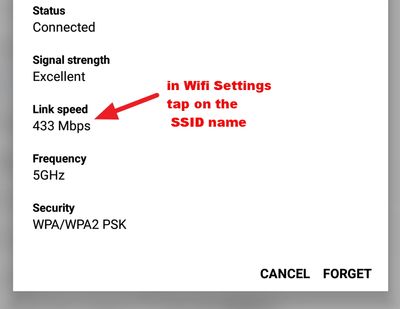 Thank you for testing the suggested options. It's good to know that your tablet was getting full speeds on CGN3 and ACSMR modems. If you wish to try the trial firmware, 2.0.10.26T2, please follow the instructions listed in the Firmware Trial post and send us a private message.

These are interesting observations and I don't have an easy answer for you but I think the problem is with the software on the LG G Pad (updated WiFi drivers) more than with the CODA.

I just repeated the tests with the following devices

These are the tests results I got:

I don't have a non CODA modem to test at the moment but the Android 7 on the G Pad III is suspicious given the bad results on both the ASUS router and the Hitron modem.

Thank you Dave for your input.

Just a curious question was the CODA-4582 bridged with ASUS RT-AC3100 router during the testing? Can it have anything to do with dual stack IP address not provided by CODA?

Also if LG Gpad had bad wifi drivers why would it reach the maximum speed on a non Coda modem?

Thank you Dave for your input.

Just a curious question was the CODA-4582 bridged with ASUS RT-AC3100 router during the testing? Can it have anything to do with dual stack IP address not provided by CODA?

Also if LG Gpad had bad wifi drivers why would it reach the maximum speed on a non Coda modem?

My ASUS RT-AC3100 is running in Access Point mode behind a Ubiquiti EdgeRouter Lite connected to a DOCSIS 3.1 modem (not a Hitron CODA-4582).

The CODA-4582 does provide dual-stack IP addresses now. If yours doesn't (and has been rebooted in the last 3 weeks), I'll need to investigate further.

As for the non CODA modem, that's not what I observed based on the above but I didn't a CGN3ACSMR or CGNM-3552 to test.

Another piece to the puzzle...I happend to purchase a Brand new LG Tab v522 on Kijiji that out of the box is running the Android 6.0.1.  I ran speedtest on CODA modem with all defalut setting on the tablet and guess what Tablet ran at full speed with 200Mbps down and 12 Mbps up during speed test. So this leads me to belive that the issue came from updating Nougat as google search is filled with nougat and 5Ghz wifi issues.

My own observation: LG tab may or may not work properly on 5Ghz WiFi depending on the router make and model.