MegnaGaming
I Plan to Stick Around

Wow... even Bell has 100Mbps upload. This is not the right direction to be moving with your packages. 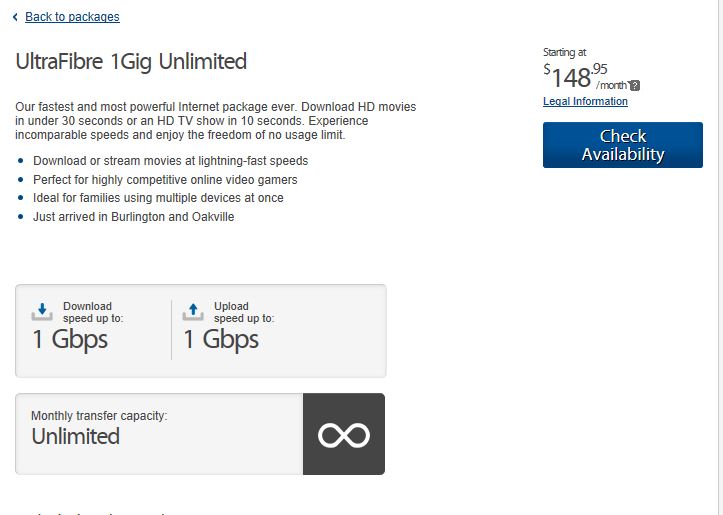 Hopefully Rogers will sort everything out (sooner than later) and offer the above. 1gig up/down/unlimited/$148/mth

I agree, I dunno what Rogers was thinking, the prices have all gone up, the old 100u plan has become the 75 plan with a 500gb data cap. The new 150u plan is priced where the 250u plan was, so these plans offer less and cost more!

They did the same thing with the cable tv packages a few months back when they got rid of VIP and replaced it with popular, which doesn't contain nearly as much channels as VIP did. And the Premier plan that comes close to what VIP offered costs much more money.

A step in the wrong direction, I don't understand why.

Rogers is always taking a step in the wrong direction. I agree with the sentiment expressed here - new plans are outrageous and a step backwards. I am sure glad I signed a new deal a few months ago for 2 years and am protected on our 100u plan.

I definitely agree with you guys. I don't understand why they would take a step backwards by replacing 100u with Ignite 75 with a 500GB usage limit? What would've looked much better is if they introduced the Ignite 500u at $119, and left 250u, and 100u where  it is.

With these price adjustments, could Rogers be trying to cover the cost of something? Was this increase placed to cover the cover cost of introducing Comcast's X1 platform and aswell as the second DOCSIS 3.1 modem that will be launching on the Rogers network mid-year?

You will notice in bundles, that Starter Cable is now available at bundled discount rates are the bundled features are the same as the two tiers above, it is just the packaging channels that changes, and the pricing advantage still discourages you away from Starter, unless, that is really all you want, which some people are interested in that.

This was a decision by the CRTC in December that BDU's had to provide bundle discounts equitably across all packages including the starter.

There is also discussion still that the CRTC is going to consider how much concerns and complaints come to consider removing the requirement for Internet and TV offerings.  Imagine being able to choose between any alternative TV provider and any alternative Internet provider.  They didn't buy the presentations of any of the companies on that one, and haven't made a final decision on it yet.

As for this whole change up in the Internet packaging, I have some thoughts on that one.

1. Can we get stable 50 up yet until DOCIS3.1 is in place and stable on the new modem builds?

2. There is a push in the quarterly reports to indicate as one of the metrics, how many subscribers are on 100 Mhz and above (now at just under 50%.  I see them having accomplished that by the deep discount on the 100 over the last year, and the unlimited bandwidth).  They are now forcing us through reduced speed options, to have to consider price increases in order to get unlimited bandwidth - you know the cord cutters in particular, although for cord cutters, they don't need the speed, so the higher bandwidth caps meet my needs, as I begin to make my move away from large cable packages.

3. Since, they were going to have to make the changes in the cable side of bundling, and developing consistent feature sets across different levels, I suspect there was an attempt to optimize the profit and minimize packages, and try to get us off legacy plans, which is what rogers told the CRTC in December was their plans as they have hundreds of different packages out there they are supporting.  So here is a chance to tinker with the motivational side of various groups, and limit the bundle offerings down to a few choices, although Bell still has a build your own bundle - so you may be able to do that by getting past a bottom level CSR, if you are an existing customer (called retentions) - I personally hate going through that whole process, but that is how the rules of the game got laid out by them, so I play the dance, but push the whole system faster by telling them what I need.  That is another request from the CRTC is that they have to present all offerings based upon assessment of our needs, including basic offerings, and that they will continue to give all offerings, but you can always say, I am not interested in listening and see what happens.

So in summary of that long one just now, I think that they shook up things in their usual way by making it difficult to compare past offerings to current offerings, with no notice that they would do it as per usual, while obviously, these packages have been created very carefully on a statistical basis of how much data we use, how many people buy the higher packages, how can they use our usage patterns to encourage through making subtle changes that may look good to us, while impacting us in other ways such as the bandwidth choices, and pricing structures.

Also depending upon the speed you choose, will determin which modem you get - the 30 and  lowest starter 15 5 mhz is an 8.00 rental, the 75 and above are 10.00 rental, so guessing AC at the upper levels, and n at the lower.  But no information on the provided modem, except that you don't need AC unless you have the GB package.

So, we go through more changes, some driven most likely due to cable bundle offerings, and framing models to motivate us to go to more, while I do appreciate that there are now more lower and fairer options for low end users.

I suspect the 50 will come, and as Bell gets GB FTTH out to everyone as they aim to as stated in their reporting, Rogers will need to move higher at a fair price, or lose out on those high end Internet users.

But in closing, this bouncing of packages features and pricing where it is almost impossible without hours on end to compare your current to new offerings drives me nuts, as well as the general reluctance to provide the information to us to make these comparisons, or for the the reps to look at our current packages, and provide us feature and price comparisons and to be able to look at alternative bundling options, like other companies do.

Oh well, for me, Rogers remains on borrowed time, I just haven't decided all my options.  After 24 years, change is hard, but they are making me think too much about my current services and the future and keep changing the information so often, I am tired of doing this exercise.